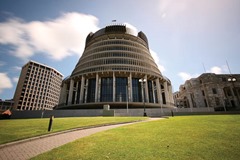 Michael McKernan examines the four approaches to reform taken by six other small countries within the OECD’s membership.

A recent report, produced jointly by Cardiff-based think tank Wales Public Services 2025 and the Carnegie UK Trust, has presented some interesting insights as to how small countries are facing up to the present economic downturn and some of the other major long-term problems facing governments everywhere.

The report, entitled ‘Weathering the Storm’, sought initially to see if there were any lessons that Wales could learn from other, comparable, countries as to how public policy and public service provision was being shaped, in order to tackle not just the ongoing fiscal crisis but the resource challenges presented by an ageing population and the costly measures required to tackle climate change.

The researchers chose six jurisdictions – four nation-states (Austria, Denmark, the Netherlands and New Zealand) and two devolved governments (Scotland and Quebec). Northern Ireland was not included because of its “exceptional political situation” and the Republic because of its severe “economic situation”.

Generally, the study found that governments were focused on immediate economic challenges and were, for example, only beginning to feel the effects of the ageing population in terms of meeting increased demand from projected resources.

The researchers, in analysing the public policy responses, were able to discern four different approaches used by the governments, most involving a mix of four approaches. The four approaches identified were:

Although all six governments were doing some ‘rethinking’, by far the most strategic in relation to ageing population and climate change were Scotland and New Zealand.

These two jurisdictions had switched from measuring inputs and processes to measuring meaningful outcomes. Prevention and early intervention were also accorded greater priority by these two governments.

In Scotland, alone among the six, strategies could be traced to active cross-cutting policies against which performance was being measured.

The other four governments tended to be more managerial than strategic in tackling major long-term challenges, including significant efforts in Austria, Denmark and the Netherlands to develop e-government and cut costs using technology.

As all six jurisdictions are facing population ageing, it was not surprising that much of the ‘reforming’ approach was in the area of older persons’ services. In Quebec, older people are conceptualised in terms of the language of a third age now split in two between ‘active ageing’ with a focus on staying in the labour market and volunteering and a ‘fourth age’ where health deteriorates and more support is required.

There is also much ongoing ‘restructuring’ across all six small countries. In some cases, this means reducing the number of administrative areas or municipalities. This has been a particularly radical process in the Netherlands.

The final approach of ‘retrenchment’ was evident across the board. In most jurisdictions, cutting back was invariably a process of salami-slicing although priority programmes were often ring-fenced. In some jurisdictions, the local government sector fared worst under spending cutbacks.

Despite some homogeneity in the public policy responses to challenging times across the six areas, the Welsh study concluded that there were many useful case studies to learn from.