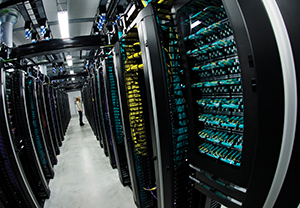 Speaking on behalf of Policy Exchange, Eddie Copeland discusses the need for local government to embrace the digital revolution and make better use of data services.

With estimates predicting that projected incomes for local authorities in England will fall a collective £12.4 billion short of their spending requirements by the year 2020 things need to change, according to Policy Exchange’s former Head of Technology Policy, Eddie Copeland.

Copeland claims that the public sector has never before known a time when it has had to deliver so much with so few resources and stresses that business as usual is simply not an option. “No sector could possibly think they can carry on as they were when facing something like this,” says Copeland. “I don’t think we can continue on this path, we have reached the point where we have to start switching off services altogether or we fundamentally agree to do something different.

“We need to reform services. I get really excited about employing technology to address these problems. The cloud, mobile and the internet of things have reached a stage of maturity and if we could just get the right technology to give us new data insights we can be fundamentally more efficient.”

Putting digital at the forefront of any government’s public facing services is an exciting idea as it offers unlimited possibilities. However, as Copeland acknowledges, it is completely and utterly the wrong way to think about the public sector reform. “IT spend is typically about 5 per cent of public sector spend I would far rather we spent the same amount driving efficiency,” claims Copeland. “In the other 95 per cent of the budget you do not save billions by driving up costs in the ICT budget, it’s a road to nowhere.

“The second thing is thinking this is all about digital or IT, it is absolute dereliction to delegate public sector reform to the IT department. If all we do is bolt new technology onto the same ways of working we have not achieved what we need to.”

The solution to this problem, Copeland believes, is, to find a fundamentally more efficient way of working that is cheaper, to evaluate the data needed to work in those ways and to determine what technology is best suited to supply that data.

“We already know how we can work in a better more joined up way but the challenge starts with the way we use data,” states Copeland. “Data is fundamental. Shared services can save a lot of money and you don’t have to replicate every single function.

“Some of the most expensive services are those where multiple public sector organisations have to work together to support one individual. The challenge in cases like these is the appropriate dissemination of data. The same individual can be reported on 30 lines of business in the same local authority without any unique identification to connect those records.”

Most public services address failure after it has happened. Copeland would like to see it diagnosed and treated before it becomes a problem. He claims that cases can be resolved with data when they are the least expensive to resolve but if the data isn’t present it is impossible to spot the vulnerabilities before they occur.

Copeland is clear that this doesn’t mean that the government has to take it upon itself, it can release data to the public as open data and let other organisations make use of it. However, he admits that for this to work in the UK a change in attitude is required.

“It should be about what that data is used to do,” says Copeland. “Why is it that there aren’t more people working with our data? A business based on one resource with one supplier and no guarantee of service level agreements isn’t a viable business. At present we just release our data and see what someone else does with it.

An example from New York City that addresses this problem is the Mayor’s Office of Data Analytics. Established by Mayor Bloomberg, a small team of two people started gathering data sets across the five boroughs of NYC and 40 other public sector organisations. Their goal was to map the data and correlate how things happen and use this information to target resources and reduce demand.

Every year, New York City gets 18,000 complaints about illegally converted apartments through their 311 helpline. The challenge is for the inspectors to identify the genuine dangers, only 8 per cent point to genuinely dangerous conversions and thanks to the Office’s work on data they can see which type of complaints are likely to be higher risk. Using this data, they have increased their efficiency to five times what it was.

“They were able to do this with just two members of staff and excel spreadsheets,” says Copeland. “In New York they regard themselves as a primary consumer of their own data, they invest in it because they save money with it.”

At present there is intense debate about the potential pitfalls of fragmentation, with arguments suggesting that everything either needs to be done locally or in central government. For Copeland, the truth rests somewhere in the middle.

“The reason we have the internet is because of a common TCP protocol that enables data to be shared across multiple networks,” Copeland explains. “This means that when there is a great idea over there, it can be shared over here and expanded upon. The public sector isn’t like this, none of it is shared, we have different data and everyone is trying to compare apples and pears. Central government should be helping to define data standards to enable data sharing across the public sector and this would be a big help for the entire public sector.”