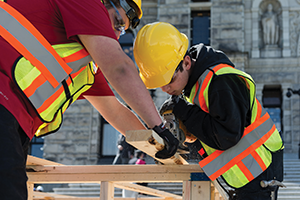 With around 50 per cent of Dutch students taking part in a vocational education process, Manfred Polzin is quizzed wherever he travels about the Netherland’s education system’s ability to attract so many students to their further education pathway.

Polzin, who works for the MBO Raad, an organisation comparable to the Association of Colleges (Aoc), said children in the Dutch school system have to make a choice based on their exam results, the children who achieve the best results at this age group will go down a pre-university education stream. Some of the students in the middle will go to a senior general secondary education system, while other may choose to enter the preparatory secondary vocational education system, although if results are poor this will not be a choice.

The preparatory secondary vocation education system provides one qualification structure with two learning pathways, the school based one and the work based one. The latter is comparable to the German dual education system. The system responds to the market demands, when there is a high demand for labour the numbers of pupils in the work based system increase as students spend more time practically learning the trade and when there is less of a demand for workers the number of pupils learning the trade in workshops at school rises.

Polzin believes this works well as both systems require the student to spend at least 20 per cent of their study time in practical work. Polzin also feels the ability to ensure that no student will be left behind sets the system apart from its German counterpart. “In pure dual systems you are completely dependent on the will of the company to take the young people,” he said. “In our system there is always the possibility for them to learn in the school or in work.”

Polzin believes that this systems offers many advantages over others used around the world, one of which is the strong levels of involvement between the social partners involved in the agreement. The institutions have high institutional autonomy, the whole scheme works thanks to the ability of all participants to negotiate. The system is all about finding a balance between the needs of the labour market and the personnel development of young people. Around 200 qualifications files have been assembled jointly by schools and employers and the qualification structure is based on competence, learning outcomes and labour market demands. These triple qualifications as they are referred to, allow pupils to enter the labour market, with a level of experience and education that will also help them fulfil their role as a responsible citizen.

At a regional level, all the programmes are tuned to the needs of the companies in the region but all must fall under the large defined umbrella of the recognised national qualifications. Every study has a recommended practical training period, without which, no diploma would be issued. Colleges now also provide future students with advice regarding the labour market opportunities of their pathway and all companies that sign up to take students must be accredited and assessed to ensure they are of a sufficient calibre.

Recognising the potential for students to be taken advantage of by the companies who take them in, Polzin notes that every student has a tutor at their educational establishment who will monitor their progress while out in the field. “We like to think of the relationship as a Holy Trinity,” claimed Polzin. “There is the student, the school and the company and within this, agreements are made so that if things aren’t going in the most perfect way then once a month or so, a tutor from the school should sit with the tutor from the company and with the students to look to what the student has done in the last four weeks.

One of the many advantages to companies is the ability to take on a student and pay them a small wage this could create the potential for employers to plump for vocational students over full time workers. However, Polzin doubts this will be the case thanks to the clear agreement around the students learning targets and tutoring struck between all three invested parties to ensure the student is taught and doing what is needed to ensure they learn the necessary skills.

Polzin also points to the higher rate of youth employment in countries that operate a dual system of education like Germany, Switzerland, Norway, Austria and the Netherlands as a proof that this system is an effective one.

He also believes that more theoretical training systems should have the ability to shift to more practice and work based learning as research shows it is profitable for the companies as well. Polzin feels that altogether, work based learning is a “very strong answer” and very attractive for young people when organised in a “good structured way that provides guidance for young people.