When Monica McWilliams sought a title for her story, one she took the opportunity of the Covid-19 pandemic to put to paper, she found inspiration in an unusual source.

Stand Up, Speak Out was chosen as an epitome of how the activist, advocate, and academic tackled unequivocal misogyny and inequality in her lifetime and is a blatant retort to the male politician who once ushered her to “sit down, shut up”.

With an ease, unique to her alone, McWilliams is somewhat unassuming yet very aware of her impact as a female role model. Although dismissive of her own personal influence, McWilliams acknowledges that as part of a collective, she has been involved in breaking new ground in political and civil society.

Interestingly, it is McWilliams’s work as a young academic that she is most proud of. Following completion of a scholarship at the University of Michigan, Ann Arbor, the Derry-born activist joined the faculty of Ulster University, introducing a Certificate in Women’s Studies to provide access to third-level education for women from disadvantaged communities alongside the first Irish University master’s degree in women’s studies. Her academic work led to her being commissioned by the British Government to complete a major study detailing the personal experiences and stories of women abused through domestic violence, leading to the first government policy in the UK on domestic violence. 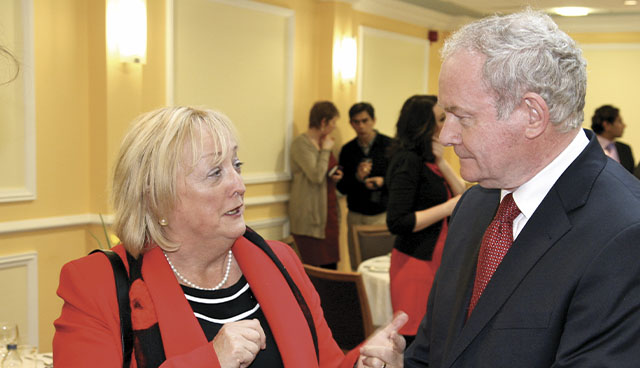 “I took great pride in giving a voice to those who had experienced domestic abuse,” she explains. “I also learned a lot about the importance of ensuring implementation, seeing a project through and delivering for those who had shared their experiences.”

I think things have changed profoundly and that is shown by many more women coming forward to enter politics.

McWilliam’s experience was the cornerstone of an extensive reach into the voluntary sector, not least as a member of the management committee of the first Women’s Centre in Belfast, helping to establish the Northern Ireland Poverty Lobby and gaining election to the Northern Ireland Committee of the Irish Congress of Trade Unions. She has been involved with Women’s Aid for almost 40 years.

“The voluntary sector highlighted to me the importance of a support network. You do not make change alone, especially when you consider the magnitude of the subjects we were and are still tackling. Those years were formative but when advocating for rights, for equality, work is always unfinished.”

Although organised into an electoral force in less than six weeks, McWilliams is quick to point out that the women’s movement and network had existed for 25 years and so was built on a “mosaic” of talented and diverse women.

Quizzed on the leadership style needed to hold together such diversity, McWilliams says: “I do not subscribe to this notion of the ‘leader’ or leadership being embedded in one individual. There is a saying that you can go faster alone but further together and that is how we approached the Coalition. We recognised that there were leadership qualities in every individual and that identifying our diversity of strengths made us stronger as a whole.”

As a cross-community party, the Coalition bravely tackled issues such as weapon decommissioning which given its composition, it would have been forgiven for avoiding. However, she stresses that all of the issues on the table impacted on the people it represented.

On how potentially community-divisive issues were tackled, she says: “We built consensus. That is not something one or a few arrive at, it has to be built. Many of us may not have known each other personally to begin with but we built trust and commitment through the recognition that you need to constantly challenge your own thinking, particularly in a conflicted society. It meant that when we adopted a stance, it was a stance of accommodation, one we all had input into and one that we could all get behind.”

McWilliams was elected alongside party colleague Pearl Sagar to join the peace talks. She believes that the work of the Coalition in shaping the Good Friday Agreement has been underplayed in the almost 25 years since.

“We definitely had our own agenda in relation to right of women to participate into the shaping of our future, but we were not just there to be token representatives. The women’s movement had been involved in conflicts throughout the world from the Middle East to the campaign for nuclear disarmament in eastern Europe and many of us cut our teeth in supporting the anti-apartheid movement in South Africa.

“Through that, we brought our experience to a wide diversity of areas. We read the agreement comprehensively, we brought expertise and input to every strand, and we came to the talks with a preparedness that I think shocked some of the other parties, who failed to see beyond their narrow rhetoric.”

Asked whether, given the division that still exists in Northern Ireland’s politics, leading to stop-start governance, a role for a party like the Women’s Coalition exists today, she explains: “There is a diversity of political parties that exists today that we did not have then. Then, many people steered clear of belonging to a political party and a window opened up where we believed we had something to offer in shaping our society’s future.

“The system then, a list system geared at parties and not individuals, created the space to get involved that doesn’t quite exist today. We saw a vacuum, we asked existing parties to apply themselves to the issues we thought were important and we didn’t get an adequate response.”

McWilliams applauds those individuals who put themselves forward for election. In her book, she details the impact being a public figure – often being the victim of abuse – on both herself and her children.

Speaking the day before polls opened in the 2022 Northern Ireland Assembly Election, a campaign in which Northern Ireland recorded its highest levels of female candidates but also one marred by levels of online abuse, the former South Belfast MLA between 1998 to 2003, believes misogyny is still pervasive.

“I think things have changed profoundly and that is shown by many more women coming forward to enter politics. However, it is important that we continue to call out those who continue to carry attitudes of the past.”

“There is a saying that you can go faster alone but further together and that is how we approached the Coalition.”

McWilliams stresses that the fight against misogyny is not for women alone and emphasises the importance of men standing up and speaking out. In this regard, she points to the late David Irvine of the PUP as a pioneer in his approach during her time in politics. Her book details the unexpected professional relationship struck between McWilliams, a human rights defender and Irvine, a former UVF member, whom she describes as “like a brother”.

Irvine’s transition from paramilitary to a persuader of loyalism to embrace peace and pursue their cause through politics is somewhat underplayed, with history tending to focus on larger mandated figures like John Hume, David Trimble, Gerry Adams, Tony Blair, and Bertie Ahern. However, McWilliams is clear about the important role figures like Irvine played. That such a relationship flourished is testament to McWilliams approach to politics.

“To build relationships, you have to get to know the stranger,” she explains. “I didn’t personally know David before we entered the talks but within a very short time, he was a character who recharged my batteries. He called others out and challenged their thinking, not just around the conflict but in how they treated women.

“David broke the mould, and it became clear to me very quickly that he understood the struggle of Protestant working class people, which many of us around the table did not.

“David taught me the importance of mediators in society. In our society particularly, we went to separate schools, lived in separate communities and played different sports but all of a sudden, we were supposed to sit down at a table and make politics work. David was a translator, which was badly needed in those times.”

McWilliams, through her many roles and peace advocacy across the globe, is well travelled and has met some of the world’s most impressive leaders. While she holds special regard for Nelson Mandela, with whom she spent three days in the company of along with the other political leaders in Northern Ireland, a time when the South African famously jested that the Northern Ireland parties had brought apartheid back to the country, it is community influencers like Irvine she points to as her role models.

“I am often asked who my role models are, and I often struggle to pinpoint one. I put a lot of emphasis on the values that I was brought up with and the incredibly formative influence of my sisters. I was fortunate enough to encounter a number of good mentors in my early academic life but if I had to identify the type of person I admire, one would be Sister Úna of Good Shepherd in south Belfast. She has served as a Chaplin in the women’s prison and has led on making a huge difference in her own community for almost 40 years and has never sought recognition but is an inspiration to the young people around her.”

Returning to politics in Northern Ireland, McWilliams reflects on whether the efforts to create power-sharing was worth it, given the fragmentation that still exists. “It rolls off people’s tongues too easily sometimes to say, ‘we made peace’. When you have a society that is more accustomed to war, making peace is harder. We interrupted a culture of failure and that came with no guarantee that of a smooth transition. The politics of power-sharing needs to be worked at on a daily basis because when the stakes are small, the fight is bigger.”

The author admits that almost 25 years on, there is scope for review of what was agreed in 1998. “The agreement was not set in stone, highlighted by the fact that it has been and will be reviewed. I welcome review to adapt to a changing society, but I would also urge caution against moving away from the agreement’s principles, because they were designed to meet the needs of a conflicted society. We have come a long way, but we must continue to build peace and make politics work.”