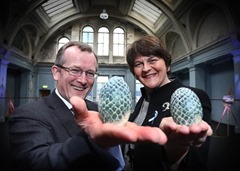 Tourism Ireland joined forces with HBO and its smash hit TV series Game of Thrones this spring to promote Northern Ireland around the world in a brand new way. A major advertising and social media campaign is under way – with ads running on Facebook and Twitter in Great Britain, the United States, Canada, France, Germany, Spain, Italy, the Netherlands and Scandinavia. The campaign aims to leverage the incredible success of the HBO brand and the huge global popularity of Game of Thrones and its strong associations with Northern Ireland – the physical and spiritual home of the series, where much of the filming takes place.

As well as extensive advertising on the two social media sites, Tourism Ireland is also targeting its own active fanbase – posting and tweeting to its 2.1 million Facebook fans and 120,000 followers on Twitter globally. The ads are directing fans to a specially-created section on Tourism Ireland’s international website: ireland.com/gameofthrones