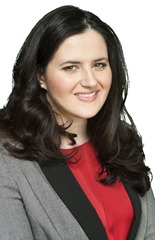 Claire Sugden was co-opted as the independent unionist MLA for East Londonderry last May and sits on the Assembly’s Employment and Learning Committee. She succeeded the late David McClarty for whom she worked as a parliamentary assistant. Claire has also been a councillor on Coleraine Borough Council since 2013 and participated as an intern on the Washington-Ireland Program in 2010.

I grew up during the peace process, so for me the politics of Northern Ireland is a natural part of my life. I studied politics at Coleraine High School and then took the subject through at QUB and now at the University of Ulster. Northern Ireland politics is very local and the effects of decisions made at Stormont are real and visible for individuals. The satisfaction of this role in helping people is personal and therefore very rewarding.

What are your ambitions for East Londonderry?

I want to see East Londonderry prosper. We have incredible potential within my constituency yet we have not come even close to fulfilling that. East Londonderry is the best placed area in Northern Ireland to take full advantage of tourism, for example. Project Kelvin comes ashore in Portrush and could attract millions of pounds of foreign direct investment and therefore jobs. It is my interest to both sell the USPs of my constituency and work with the expertise of local business and people to show the world there is life outside Belfast.

Who has inspired you most in politics?

I would always say David. I suppose I was a student of politics for many years and taking an interest in it but I wasn’t sure that I would ever be a politician. Working for David, I realised that politics was about working for people. That’s why they put you in that position.

Seeing how challenging this role can be makes me realise how seamless David made it look. I don’t think I saw half the work that he had put into the role and I would never have been in this position if it wasn’t for him. I have sat in a room with congressmen, MPs and many other political leaders but it would always come back to David. He was local and loyal – and that’s what I aspire to as well.

What are the challenges and opportunities of being an independent?

I don’t get party funding, so resources are limited as an independent MLA. Stormont is a party house; it is structured to facilitate larger political parties. Smaller parties and independents have limited speaking rights so it is difficult to have a voice, although not impossible. 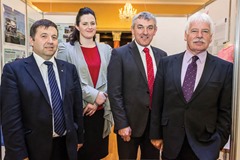 As an independent, my profile as a MLA is almost a political party in itself, so much is expected of me as an individual. I see a great opportunity in this, however, because I am my brand and I can control the message and values I espouse. I am not associated with anyone else or a fundamental party line so I can clearly represent the people I am supposed to. It also reiterates the personal politics I subscribe to.

What are your priorities on the committee?

The University of Ulster and two regional colleges sit in my constituency. I am keen to advocate for them. I will also champion the needs for skills building and work experience, particularly for young people.

What did your internship in Washington involve?

I worked in the Department of Health and Human Services in the Office for Faith-based Education. Over in the States, it’s very much expected that people do want to have their kids taught from a faith perspective. One of the things that I always remember from that is a Father’s Day event in one of the poorest parts of DC to celebrate fathers from that area, and Barack Obama actually came and made a speech. That was quite a big opportunity and it doesn’t happen very often.

What can Northern Ireland learn from US politics?

One of the most curious things I like about American politics is that the US is a huge country with two parties and they are still able to represent as many people as possible. It suggests that you can be a Republican or a Democrat but you don’t necessarily have to agree with your colleagues from the same party.

I am a great believer that challenge isn’t a bad thing. Within your own party, if somebody disagrees with you that’s more healthy than a party line. Obviously, there are things that bring people together to form parties but I think Northern Ireland politics can look towards that and see that disagreeing within a party is not necessarily bad.

Challenge encourages you to make the right decision because you look at all other avenues and every possible outcome and decide what is the best way. Congress very much works at a constituency level and they come together in DC on the bigger political issues. That’s natural because you cannot represent one view for every local area.

I have just bought my first home in Coleraine. It is very old and certainly a labour of love, so I spend most of my time doing odds and ends to make it more homely. Had I not ventured into politics, I probably would have pursued art, but it’s nice that it remains a hobby so I often spend my free time drawing or painting.