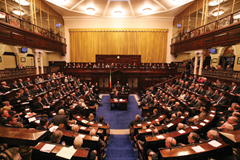 Stephen Dineen discovers the easiest way to organise a tour of Leinster House.

Northern residents can book tours of the Oireachtas directly, without needing a TD, Senator or embassy. For many people, both north and south of the border, the experience of visiting the Oireachtas is an enjoyable one. Amongst the more than 100,000 visitors to the home of southern politics last year were Rev Ian Paisley and his wife, an occasion he seemed to highly enjoy. He was the guest of former Taoiseach Bertie Ahern. In the final days of his premiership Ahern paid tribute to the ushers who provide the tours, describing them as “fountains of knowledge on the history of the Oireachtas.”

“These men and women are unfailingly polite in carrying out their duties. I often wonder if all the stories they tell are true, but, in any event, they sound good,” he told a chamber full of laughter.

To organise a tour, the Oireachtas website states: “If living in the Republic of Ireland please contact a local TD or Senator, with your preferred date and time, the number of people/students and a contact name and number of the person/s who will accompany the tour. The TD/Senator will then make the appointment for you with the Events Desk.”

People living outside the Republic are advised to “contact your Embassy or Honorary Consular Representative who will contact the Events Desk on your behalf to make the necessary appointment.”

Given the links between North and South it seems strange that northern residents would have to contact the British embassy. Northern MPs can attend meetings of the Oireachtas Committee on the Implementation of the Good Friday Agreement. Sinn Féin has pressed for speaking rights in the Dáil for northern MPs. History was made on 9 May when MEP Bairbre de Brún became the first elected representative from Northern Ireland to speak in the Dáil, during a special sitting to mark Europe Day.

The notion of a nationalist or republican ringing the British embassy in Dublin to organise a Dáil tour seems remote.

agendaNi contacted the Oireachtas to inquire if particular arrangements are provided for those living in Northern Ireland. At first we were told people might contact their local MLA to organise such a tour. If an MLA requested a tour, we were told, it would be accommodated subject to availability.

We then spoke to the Deputy Head Usher, Noel Kelly, who is responsible for Oireachtas tours. He told agendaNi that the embassy route does not apply to residents in the North. People merely have to contact the Events Desk (00 353 1 618 3781) mentioned on the website and a tour, subject to availability, will be organised.

On a typical day there are tours at 10.30am, 11.30am, 2.30pm and 3.30pm. Many schools throughout the Republic send classes on trips to see the Dáil and Seanad in action, meet their local politician, and have the traditional ‘mineral and a bar’ in the canteen after the guided tour.

According to Kelly, a dozen or so different kinds of groups from the North take guided tours of the Oireachtas each year.

Meanwhile at Stormont no distinction is made between those living inside or outside Northern Ireland when organising a tour of Parliament Buildings.  While the Assembly is in session, public tours are available on weekdays at 10am and 3pm. However, tours outside this time must be by invitation of a member or officer of the Assembly.