RiverRidge CEO Brett Ross discusses the prominent role of the waste industry in tackling the climate crisis and the need to move beyond Northern Ireland’s “addiction” to landfill.

As CEO of Northern Ireland’s leading waste management company, Ross has overseen a decade of innovation, which has enabled RiverRidge to play a critical role in the substantial reduction of residual waste being sent to landfill and the deployment of technology to alter the destination for residual waste streams.

Ross acknowledges the substantial reduction in the landfill of waste which has taken place across Northern Ireland in recent years, but stresses that more needs to be done to ensure that the practice of sending untreated waste to landfill is eradicated.

Increasing diversion from landfill is just one element of Ross’s vision for a step-change in the waste management industry, shifting Northern Ireland’s waste management sector from a laggard to a leader in climate action.

Originating from the acquisition of a small skip hire and landfilling company with 24 employees in 2011, RiverRidge has transitioned into Northern Ireland’s leading waste management company, managing over 400,000 tonnes of residual waste each year, and directly employing 280 staff.

From an initial investment in its first waste recycling facility, which facilitated a 60 per cent diversion from landfill rate for the then Coleraine Borough Council, RiverRidge’s landfill diversion solution extended to a number of additional local authorities thereafter.

In 2018, the company completed construction of Northern Ireland’s only large-scale waste to energy facility, Full Circle Generation (FCG). The highly complex project secured funding of £107 million from a consortium of infrastructure funds as well as RiverRidge itself.

“As pressure to reduce carbon throughout the economy becomes more acute and regulated, scope three suppliers like ourselves are going to emerge as key changers in providing support.”

The company is currently progressing a number of innovative projects which includes their ground-breaking vehicle fuel synthesising project. The £25 million project is expected to create a compressed biogas fuel which will decarbonise a large proportion of its vehicle fleet.

“As an industry, we are a unique element of the supply chain providing a service to every business entity across the region. We consider ourselves a utility and therefore, action taken within our industry has an exponential impact,” he states.

“It is our responsibility to ensure that waste is collected and treated in the most carbon efficient manner as well as finding the most environmentally sensitive final destination.” 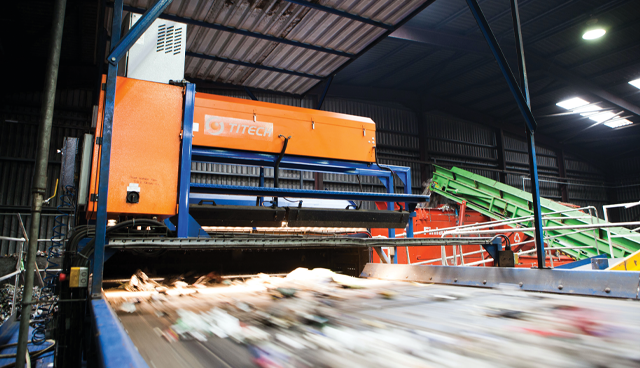 Ross pinpoints two critical functions of the industry to ensure the reduction of carbon in waste management in Northern Ireland. The first is as a collector of data, better informing stakeholders of the levels of waste being produced, the composition of produced waste and the carbon cost of that waste.

The second, a role that RiverRidge is seeking to excel in, is the exploration of ways in which the carbon intensity of waste management can be reduced through the development of circular economy solutions.

Emphasising that the appreciation of carbon in most commercial and public organisations is still in its infancy, Ross says: “As a downstream service provider in the supply chain, we fall under scope three of the Streamlined Energy and Carbon Reporting (SECR), so we are partially hidden in an organisation’s overall carbon footprint. However, as pressure to reduce carbon throughout the economy becomes more acute and regulated, scope three suppliers like ourselves are going to emerge as key changers in providing support.”

The CEO aspires to see individuals, households, businesses, and local authorities place similar emphasis on carbon accounting, as currently given to financial accounting. Highlighting the challenging nature of achieving this change of mindset, Ross believes that this cultural change will be driven by big business, as they come under more pressure to publish and implement environmental, social and governance (ESG) strategies.

To this end, RiverRidge is leading by example and is in the process of finalising its own ESG strategy. Perhaps, most importantly, the organisation plans to make its ESG strategy and subsequent performance reports publicly available documents, allowing stakeholders to evaluate its environmental and social credentials.

The CEO explains his vision that the evolution of the strategy will see RiverRidge’s suppliers, eventually, being required to adopt similar principles, creating a convergence which cannot be ignored by government, businesses, or individuals.

Fundamental to the creation of new uses for residual waste streams in Northern Ireland, according to Ross, is a move away from an “addiction” to landfill and a predilection for energy recovery as a source of landfill diversion.

“Over the course of the past 15 years, the UK has moved from landfilling up to 70 per cent of its waste to a rate of only 28 per cent, and by doing so, has realised a significant reduction in greenhouse gas production. It is a remarkable achievement but all we have done is move off the bottom tier of the waste hierarchy to the second lowest tier, which is waste recovery.

“The realm of waste recovery is not particularly environmentally sensitive and doesn’t fully exploit the value trapped in what is essentially a collection of valuable resources. In particular, the combustion of plastic is nearly as harmful as combusting traditional fossil fuels and, in some circumstances, even more harmful.” 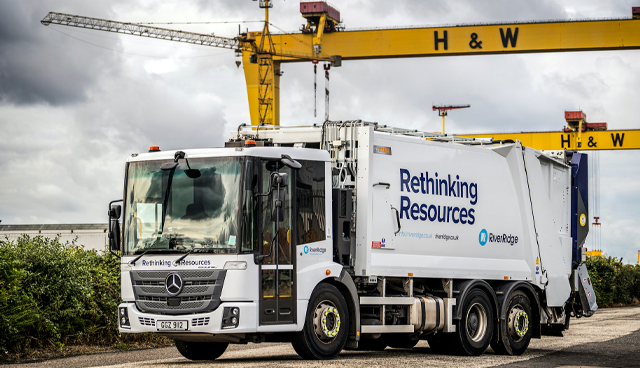 In this regard, Ross admits that RiverRidge as an organisation has taken onboard learnings and become much more carbon aware over time. The FCG waste-to-energy facility, uses a feedstock made predominantly from household residual waste. However, the gasification technology used within the facility enables the waste to be extensively treated prior to final combustion, allowing for a large proportion of the recyclable components to be extracted.

While Ross admits that waste-to-energy is not a long-term solution, he does believe it has a place in the industry for the next 10 to 15 years as other treatment solutions begin to emerge. “Waste-to-energy is a better alternative to landfill. However, in 2021, four councils in Northern Ireland still send 100 per cent of their residual household waste to landfill without any treatment and I think that illustrates the lack of any real urgency to find an immediate and more carbon sensitive solution.”

RiverRidge has evaluated a number of different waste treatment alternatives and has invested significant sums to explore their viability. For instance, Ross explains that the company is on the cusp of developing treatment solutions which will divert more plastic away from energy recovery and avoid combustion of such a valuable resource.

He believes that waste treatment solutions should be based on the evaluation of carbon intensity and may include a number of end destinations including recovery, recycling and possibly even landfill where there is no existing treatment solution in place.

“In 2021, four councils in Northern Ireland still send 100 per cent of their residual household waste to landfill without any treatment and I think that illustrates the lack of any real urgency to find an immediate and more carbon sensitive solution.”

Describing a clear overlap in the provision of recovery and recycling, he points to the far-less carbon intensive process of biological recovery as a prime example of not only the creation of recyclable products as an output, but also the creation of land-based products that can actively sequester carbon from the atmosphere.

It was this understanding that has led RiverRidge to progress the development of a fully integrated mechanical and biological treatment process, the first stage of which has seen the commissioning of a waste washing facility at their Craigmore site, which can extract the organic waste trapped within the household residual waste that they currently treat. The next stage of the project will enable the extraction of methane gas and CO2 from the organic fraction created in the wash facility and the creation of circular economy products such as bioCNG, soil improvers and bioCO2.

Ross credits the innovation of his staff in ensuring RiverRidge has a long pipeline of potential projects in the years ahead. He emphasises that the potential for innovation in the waste sector and the move away from historic management of waste, has opened the sector up as an attractive area of work for a diverse range of skills not previously associated with the industry.

“We have a big pipeline of projects thanks to an number of innovative employees. RiverRidge prides itself on fostering that disruption mentality, emphasising that things do not always need to be done as they always were. It is an exciting time for the industry and an exciting sector to work in.”

Interestingly, Ross believes that unlike many other sectors of the economy, the transformation can be spearheaded by the waste industry itself, with little public investment necessary. However, he emphasises that the public sector still has a role in fostering and engaging in better collaboration.
“Emerging climate legislation will set the targets of where we need to be from an environmental point of view but in order for us to get there and get there quickly, there must be much more openness around what the private sector can provide and what the public sector activities are.

“In relation to waste, the public sector engages in the collection of waste from the household, and I believe that it should remain as a well-established service and source of employment. However, when it comes to the technical aspects of recovering and recycling that waste, the private sector has moved way beyond what the public sector can provide.”

To date, companies like RiverRidge have had to take enormous risk in building future-technology infrastructure, without the confidence that the supply of waste will always be there to support the infrastructure.
“The collaboration should be an open and honest discussion around how we can bring the two sectors together to benefit each other. Individual strategies have no place because we are not a big enough region to have council-by-council strategies where waste is dealt with in a unique way. A holistic approach, and perhaps, an all-island approach, is where we are going under the forthcoming environmental bill.”

Concluding, Ross says that he strives to see a closer relationship between the public and private waste sector over the next 12 months, stressing that the practice of sending untreated residual waste to landfill must be ended. In the longer term, he has an ambition to see RiverRidge reduce its carbon footprint by 50 per cent by 2030, delivering and following a strategy which clearly defines a pathway to net zero by 2050. 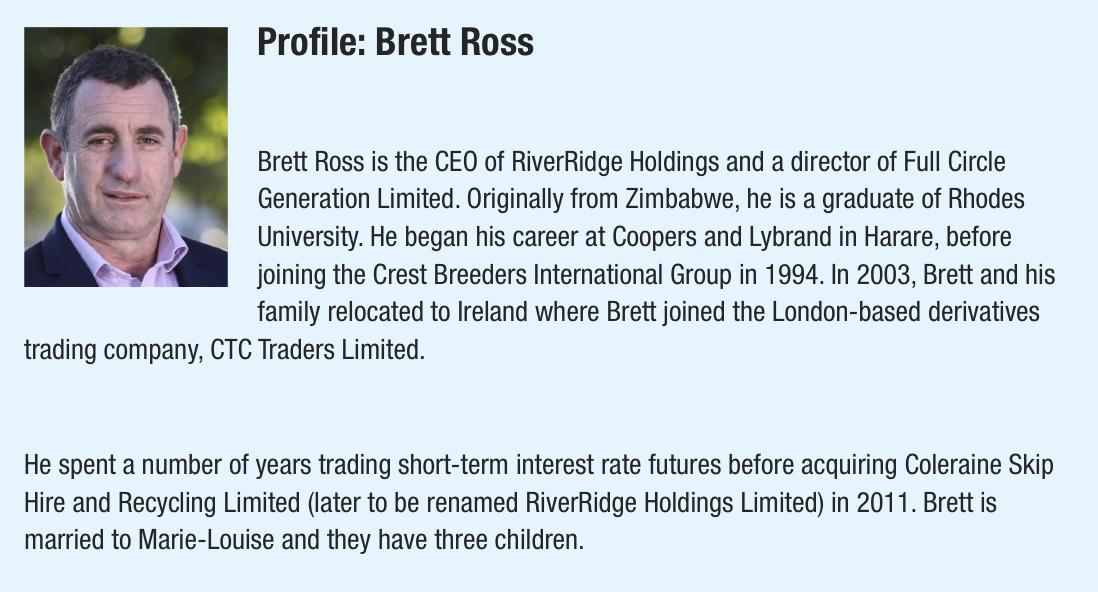 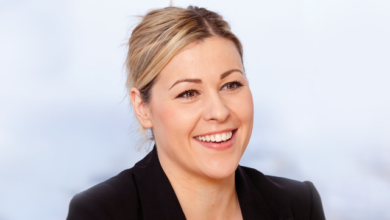 Wellbeing is a digital balancing act