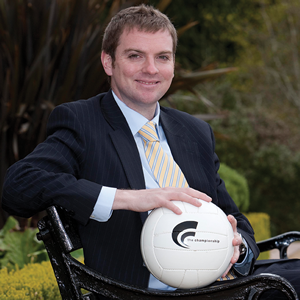 A graduate in electronic and electrical engineering from Queen’s, Thomas Kane didn’t take the typical route to the TV screen. After a stint for NBC in California, he is now a regular feature on BBC Northern Ireland’s sports coverage.

What is unique about sports journalism?

I think it is the access. Let’s face it, every sports journalist is someone who grew up wanting to be a top level athlete, but wasn’t good enough!

This job gives you a chance to get within touching distance of the action and talk to the stars of the sport. I particularly enjoy working pitch side at matches. There is an electric energy at big games, whether it is rugby, soccer or Gaelic football. It is an energy that gives you goose bumps at times, as you experience every emotion endured by the players and fans. Getting the opportunity to speak live to those involved seconds after the end of the game puts you in a position where you can ask the questions everyone watching at home, or in the ground, wants to hear answered. Nothing beats playing sport, but working at big events comes close.

You also get the chance to see the human side of some of the stars away from sport. Earlier this year, I presented a documentary on Manchester United and Northern Ireland defender Jonny Evans. He brought us on a tour of United’s training ground, we got a chance to watch sessions and interviewed the likes of Ryan Giggs and other superstars as well as spending time with Jonny outside football. You realise people like Jonny are just normal people who are very talented and committed. Sportsmen aren’t particularly well known for their modesty, but most of them are genuine and prefer to shy away from the limelight.

How does your experience is the US compare to Northern Ireland?

It was very different over there, but a great learning experience. When I was 20, as part of my degree, I was employed as an engineer with Siemens in Silicon Valley in California. Having worked a bit for BBC, I contacted NBC to see if there would be any opportunities with them. Luckily, they ran an intern scheme at the weekend, so I used to work for them on a Saturday and Sunday, then for Siemens during the week.

The station I worked with covered the Bay Area, which is made up of Oakland, San Francisco, San Jose and some of Northern California. My biggest challenge was learning about Baseball and American Football. I played basketball throughout school and university, but the other two sports confused me totally. After a while, having learnt enough to bluff my way through, I started to interview some of the stars from the Oakland Raiders, San Francisco 49ers, Oakland Athletics and San Francisco Giants, as well as the Golden State Warriors. I had a great time and the players were good with me, loving the Irish banter.

I didn’t appear on camera for NBC, mainly doing background work, but I interviewed the likes of Jerry Rice, Michael Jordan, Barry Bonds, Andre Agassi, Serena Williams and even George Lucas, the Star Wars creator. It was a fantastic experience and I am very lucky that NBC gave me that opportunity.

Are there any sports the ‘fan’ in you prefers to cover?

To be honest, I am a sports addict, but I suppose for me, Gaelic football’s All Ireland Championship is extra special. I am lucky to work as the pitch side reporter for ‘The Championship’ programme. I get a front row seat every step of the way, getting immediate reaction from players and managers. Huge crowds pack into grounds during the heat of the summer, hoping that it will be their year. It is a unique competition which I love working on.

Having said that, and while it might seem like a cliché, there is something thrilling about every sport. Rugby internationals make the hair stand on the back of your neck and when you are sent out to cover an event, you just don’t know what to expect. That is one of the main attractions of the job, the unpredictability factor. In the future, I would love to work on the basketball element of the Olympic Games.

What the most memorable sports story you have covered?

It is hard to pick one particular story. My first live All-Ireland final was big for me, as was Ireland’s rugby team winning the Grand Slam for the first time in 61 years and there have also been some fantastic nights at Windsor Park.

The documentaries I have made on Jonny Evans, Jack Kyle and Martin Clarke and Mickey Harte are special to me, simply because so much work, time and effort are put into making half an hour of television. It really does dominate your life for a while. But there is one story which does stand out. Playing basketball growing up, Michael Jordan was my hero; I idolised him.

When I was out in America, Jordan had just come out of retirement to play for the Washington Wizards. The Wizards were playing in Oakland at the same time as some of my mates from home were coming across to meet myself and my friend Gareth in the States. It was a crazy couple of weeks, Gareth turned 21, it coincided with St Patrick’s Day and we had all headed to Las Vegas. But nothing could top Jordan’s last ever game in California before his retirement. I bought four tickets for the match, only to find that NBC wanted me to work that day. I was gutted, but NBC had been brilliant to me, so I headed into work. As I arrived at the office, with my friends off to the game, I was handed a press pass to the match – I would be doing interviews after the game.

Wow! I don’t usually get nervous, but I was this time. We headed to the stadium and recorded pre-game interviews with celebrities courtside. It was the night of the Oscars, but George Lucas, Danny Glover and a host of stars were here. They all shared my obsession with Jordan and were more than happy to chat with me about him on camera.

He may have been past his best, but getting to see the greatest basketballer ever playing in person was a dream come true. After the game I was sent off to interview him. I only got the chance to ask one question to Michael, but I just remember shaking like a leaf. It might not have been that memorable a story for anyone else, but for me, it will have to take something spectacular to top that in terms of unforgettable days at the office!

If sport is your passion and your work, can you ever relax?

Crazy as it seems, I tend to relax and switch off when I am playing sport myself. It is good to take part rather than talk about it!

In particular I tend to relax playing golf. I find it the most infuriating game in the world, but I love being away from things for three or four hours. Even though I mostly play with Gavin Andrews who also works for BBC Sport, work never really seems to crop up in conversation and any time Rory McIlroy is in work, we both torture him about the latest adjustments to our swings. God only knows what he thinks of us.

The nature of the job though, is that there are always stories or events happening. My girlfriend has the patience of a saint putting up with phone calls at the most inopportune moments and for joining me in my search for an Irish bar in the most obscure parts of the world as I try and catch a big game from back home. I don’t think you can do the job without loving sport, because you are constantly surrounded by it, working long hours and not making as much money as people think! Despite all that though, I still love it and wouldn’t swap it for the world.