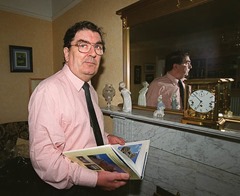 A 1983 working document for the New Ireland Forum called for a more positive vision from unionism but also questioned the traditional definition of Irishness. Unity, it suggested, required compromises from the Irish state and nationalism.

The 1980s were a decade of political stagnation at Stormont with the Troubles continuing, strong direct rule from London and an increasing role for Dublin. However, political thinking was alive and well as shown by an internal paper from the New Ireland Forum in August 1984.

The New Ireland Forum brought together the constitutional nationalist parties to discuss a political solution to the Troubles in 1983 and 1984. It had been proposed by John Hume and established by then Taoiseach Garret FitzGerald. Members were drawn from the SDLP, Fianna Fáil, Fine Gael and Irish Labour Party.

The first session took place on 30 May 1983 and the last on 9 February 1984. The unionist parties and Alliance avoided the forum but two UUP members, Michael and Chris McGimpsey, gave evidence to it in January 1984. The Protestant churches also made contributions.

The ‘Framework for Discussion of Fundamental Problems’ is marked 10 August 1983. It was clearly produced as an internal document for the forum but had come to the NIO’s attention. At that point, four “substantial areas of agreement” had been identified:

1. the British Government needed to “undertake a major reassessment of its own position and of its historical role” in failing to prevent unionist “abuse of power”;

2. Irish nationalists needed to conduct their own “major reassessment” of why they had failed to convince unionists and British Government “of the merits of the nationalist aspiration”;

3. Northern Ireland’s political structures effectively excluded nationalists from decision-making and denied them “an adequate symbolic and administrative expression of their Irish identity and aspiration”;

4. the forum needed to “fully and adequately” understand “the problems posed by loyalists in any new structures.”

The document then went on to discuss how nationalism could better understand loyalism – the term, in this case, was interchangeable with unionism. Under the heading ‘The Loyalist Ethos’, the authors write that unionists have “collectively behaved in a consistently negative fashion towards nationalists” and have “failed to explain themselves positively.”

What unionism sought to prevent was clear (a united Ireland) but the more pertinent question was: “What do they seek to protect?” Loyalists, it noted, have “the same concerns, the same motivations, as nationalists. The difference lies only in their perception of their interests as a separate community and this in turn reflects their particular historic experience and their communal values.”

Unionists asserted that their identity and heritage were “irreconcilable” with that of nationalism. They therefore viewed the nationalist aspiration as “fundamentally threatening to their identity”. This was reinforced by “the present campaign of violence” i.e. by republicans. However, from a nationalist viewpoint, their identity had struggled to survive and develop. Northern Ireland was “an entity in which they saw nationalist values and identity counting for little.”

Many northern Protestants regarded themselves as British and “the inheritors of a specific communal loyalty to the Crown” whereas nationalists traditionally opposed British rule in Ireland. Based on Protestantism, unionism claimed to “embody” liberty of individual conscience in contrast to the “authoritarian and centralist” Roman Catholic tradition.

A difficult question arose for the forum. Could it redefine the traditional concept of “Irishness” so that it could improve its relationship with unionism? Following on from that, could a New Ireland have “institutions and guarantees” that accommodated a loyalist and Protestant heritage?

The authors went on to ask: “Have we measured the real cost to ourselves and to others of progress towards Irish unity – ideologically, symbolically, politically, socially?” For example, this could mean reducing the Catholic Church’s influence on family law (i.e. divorce) and in running education and health services.

Nationalists “by and large have wished to belong to a political entity that sustained Catholic values.” Both sides might have to “compromise their view of an ideal political framework so that both cultures, ethos and sets of values can be put on an equal footing”.

Irish unity would imply an “agreement freely arrived at by the two traditions in Ireland” but unionists would be suspicious of a “pre-determined framework” set down by nationalists.

The final report was published in May 1984 and outlined three options:

• a federal state, based on the North and South; and

• joint authority by the British and Irish governments over Northern Ireland.

Margaret Thatcher rejected all three options but, in a later letter to MP Michael Mates, she privately welcomed its “unambiguous condemnation of violence; its declared willingness to consider other views; its recognition of the separate identity of the Unionist people of Northern Ireland; and its repeated references to the principle of consent.”

The British and Irish governments subsequently signed the Anglo-Irish Agreement in November 1985.

Later in the decade, Peter Robinson, Harold McCusker and Frank Millar set up their own Unionist Task Force which, like the New Ireland Forum, acted as a think tank. Its final report – ‘An End to Drift’ – was published in June 1987 and affirmed that “protest can be no substitute for politics.”

Taking part in negotiations was a sign of confidence rather than a precursor to a “sell out”. Full integration with the UK attracted “substantial support” among unionists but the Whitehall establishment was “strongly opposed” and devolution was therefore “the more attainable objective.”

A unionist convention was proposed, to consider an alternative to the Anglo-Irish Agreement and enter into discussions with the UK Government. A special commission would also be set up to consider “alternative constitutional models” if negotiations were to fail. This appeared to accommodate loyalists who were starting to advocate ‘Ulster independence’.

The report was rejected by Ian Paisley and James Molyneaux and prompted Robinson’s brief resignation as DUP deputy leader. Some of its contents – and that of the New Ireland Forum report – were resurrected in the peace process talks and were ultimately incorporated into the Good Friday Agreement in 1998.

Both documents are available at the University of Ulster’s Conflict Archive on the Internet: cain.ulst.ac.uk