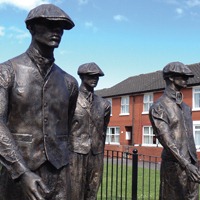 The bright Titanic Belfast building contrasts with still derelict streets in nearby inner East Belfast, but the constituency’s MP thinks that the whole area can share in the new development.

“We’re starting to see business opportunities open up, we have seen local community groups come together in order to develop community projects and we are starting to see people take ownership of that,” Naomi Long tells agendaNi.  Those are “glimpses” of the area at its full potential.

Yet anyone walking along the Lower Newtownards Road can see tentative signs of hope.  The East Belfast Mission’s Skainos project (putting a large social enterprise work under one roof) is taking shape.  The Titanic Yardmen sculpture at Pitt Park (pictured) was the last stage in a project which removed sectarian symbols from that interface area.

Long is hopeful that new manufacturing jobs will follow in the former shipyard and having  the Belfast Metropolitan College within walking distance of the inner east helps local young people get those skills.

Forum for Alternative Belfast architect Mark Hackett has, though, warned that the Titanic Quarter could turn into a rich “parallel city” cut off from the city’s poorer residents.

Asked whether the benefits have been fairly shared, Long remarks that these are early days.  She recalls that at the outset of the project, there was “a fear that the Titanic Quarter would become sealed off and almost a separate part of the city”.   However, she thinks that this perception has now gone and people have “embraced it much more.”

The Titanic Yardmen Walk and Cycle, for example, brought 1,000 walkers and cyclists to the Sydenham Road through the re-opened Fraser Pass.

“One of the very positive things about the Titanic Quarter is that it is very much a model of what a shared future can be like,” Long remarks.  “It’s built on heritage so it still has colour and flavour but at the same time it’s open and welcoming to everyone throughout the community.”

She adds: “For me, it’s not about making spaces neutral.  It’s about trying to express the diversity within our city in a way that draws people in rather than pushes people away.”

Investment and job creation will depend on bringing about a genuinely shared future, the MP affirms. Existing businesses have pointed out that interface riots (as far back as 2001) have deterred customers from coming to East Belfast.  “So it’s really important,” Long concludes, “that we recognise that creating a stable Northern Ireland but also creating a shared and integrated Northern Ireland is hugely important for economic development.”