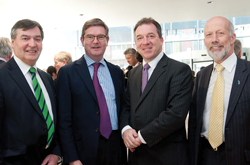 Rebalancing the economy and helping the Executive deliver are two key goals for the NIO, Director-General Julian King tells Peter Cheney.  Northern Ireland, he says, can also play its part in the renewed British-Irish relationship.

Times have changed for the NIO.  Once the central department for security and political policy, it passed most of that remit to the devolved Department of Justice in April 2010.  Its workforce, in turn, dropped from 2,244 staff to 196, and down to 180 at the end of last year.

agendaNi met its Director-General at Stormont House, a quieter location than its neighbours which reflects its changed status.  Julian King was appointed to the post in November, after two years as the British Ambassador in Dublin.

“I’m delighted to have the opportunity to came and join this organisation because I think it’s at an absolutely fascinating and important time,” he states.  The next two years, without elections, give government the chance to make progress.  A range of events will “attract worldwide attention” to the province and King adds: “I think we need to take that opportunity.  It only comes about only rarely and we need to seize it for the good of everyone across Northern Ireland.”

The NIO sees rebalancing the economy as the main way of underwriting Northern Ireland’s security and prosperity.  Its ministers fully support the Executive’s 25,000 new jobs target.  In practice, this has involved encouraging the Treasury to devolve air passenger duty and corporation tax, including Belfast in the UK’s urban broadband fund, and working behind the scenes with British Airways Chief Executive Willie Walsh on maintaining the London-Heathrow BMI route.

King is also impressed by Northern Ireland’s existing successes, including attracting 7 per cent of UK foreign direct investment (between 2007 and 2010), manufacturing nearly a third of London buses (at Wrightbus in Ballymena) and 35 per cent of all computer drives having a part made by Seagate in Derry.

The NIO, he explains, currently has three roles.  Firstly, to work with the Executive and help it deliver on the Programme for Government, particularly on rebalancing the economy (a key personal priority for Owen Paterson) and making sure “that those benefits get to all parts of society.”

Secondly, it has a two-way role in the relationship between Northern Ireland and Whitehall.

The first half of that involves being an “active voice and representative of Northern Ireland interests,” as shown by its intervention in the Presbyterian Mutual Society and air passenger duty.  At a general level, the NIO makes sure that Whitehall takes account of Northern Ireland’s case, as shown by the Secretary of State’s line on corporation tax.

In the other direction, the NIO is “not going to shy away” from its role in representing Whitehall policies in Northern Ireland.  That means explaining UK-wide policies and “working with the devolved administration on their implementation.”  King highlights how the NIO has contributed to the local welfare reform debate.  This also means looking at and taking seriously “justified particular circumstances in Northern Ireland that might affect its implementation”.

The third area is national security.  “A lot of progress has been made around the follow-up to devolution of policing and justice,” he remarks.  “We have an excellent Justice Minister.  We have an excellent Department of Justice. We have an outstanding police force in the PSNI. But there are a small number of people who are still turning their backs on politics and the political process and still resort to violence and terrorism, which represents a threat to national security.”  The NIO’s role is to “dissuade them from that and maintain the focus on the successful political process.”

The political process has resulted in very different structures of government in Northern Ireland than those in Scotland and Wales.  Asked whether the NIO hopes to see more normal structures by the end of this Assembly term, King emphasises that making the current arrangements deliver is its priority.

“They are democratic structures, of a particular sort,” King emphasises, “that reflect the history and the process that has brought us to a series of very successful Assembly elections, and the establishment of an Executive that has just produced a very ambitious and challenging Programme for Government that it now moves on to try and implement.”

Northern Ireland is the only part of western Europe where a government cannot be voted out of office.  “But Northern Ireland has the Executive that reflects the votes at the last election,” King replies, which is true except for Alliance’s second ministry. “They now have a very challenging Programme for Government and we want to work with them on its implementation.  I think that’s the real challenge for the period ahead.”

Addressing the Assembly last June, David Cameron looked forward to “a more normal system, with a government and opposition, consistent with power-sharing and inclusiveness.” However, he also reiterated that the UK Government would make “no changes without the agreement of the parties in this Assembly.”

In their joint statement in March, Cameron and Enda Kenny emphasised a new ‘special relationship’ between London and Dublin, which majored on the economy and working together in Europe.

Pressed for tangible benefits to Northern Ireland, he recalls his previous interview with agendaNi (issue 34, page 99) when he spoke of the “challenge of strengthening the relationship” and says that has “moved forward enormously.”  Examples include the good relationship between the two new governments, British “solidarity and support” for the Irish economy, and the Queen’s visit. 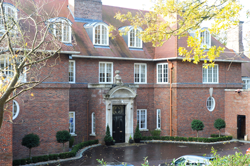 That shift was “captured politically” in the statement, which was “deliberately looking forward” over the next 10 years.  However, it was not exclusive and he points to its paragraph on Northern Ireland.

“So it’s a relationship between London and Dublin that, as it were, doesn’t talk about what they can do to help Northern Ireland,” he explains.  “It does a whole range of things across a whole range of areas, including areas [on] which it would be very important for Northern Ireland to be engaged.  Whether that is on the economy, whether it’s on the environment, whether it’s on Europe, we will be working effectively between London, Dublin and Belfast to make progress on those areas.”

The UK Government’s Scotland Bill will devolve more powers to the Scottish Parliament, including on income tax and stamp duty.  When asked how this will influence the future of local devolution, he points out that each devolution settlement is different, reflecting each country’s history.

King concludes: “If we’re going to make that case successfully, part of that case is that Northern Ireland has very particular circumstances that both support the devolution of new powers on corporation tax to Northern Ireland and would work.”