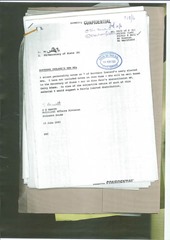 NIO staff provided frank assessments of seven of the province’s newly elected parliamentarians in 1983 and made some forecasts for their political prospects.

The 11 June 1983 general election was a defining poll for Northern Ireland with the number of constituencies going up from 12 to 17. Eleven went to the Ulster Unionists, three to the DUP and one each to John Hume, Gerry Adams and Jim KIlfedder (the Ulster Popular Unionist MP for North Down).

Four days later, SG Hewitt of the NIO’s Political Affairs Division forwarded “personality notes” on seven of the new MPs to the Secretary of State, Jim Prior, and Head of the Civil Service, Sir Ewart Bell. The writer added:

“I have not included notes on John Hume – who will be well known to the Secretary of State – nor on Sinn Fein’s abstentionist MP, Gerry Adams.” The notes therefore cover six UUP MPs and the DUP’s William McCrea.

A former teacher, Beggs had moved from the UUP to DUP in 1970 but a visit to Dun Laoghaire, Larne’s twin town, in 1980 led to his expulsion from the DUP. The note continues: “Frequently outspoken and with an independent turn of mind, Mr Beggs holds a low opinion of many of his former colleagues in the DUP.” He is “not a tee-totaller and not an advocate of strict Sunday observance”. He had just defeated the young Jim Allister and this was “a tribute to his popularity in the town.” Beggs lost his seat in the 2005 election but continues as an alderman on Larne Borough Council.

“Very much a Molyneaux man,” Clifford Forsythe was elected for the redrawn South Antrim seat. The area had previously included the Lisburn area but this was separated off to form Lagan Valley, now held by Jim Molyneaux. A small businessman, he had just completed a year as Mayor of Newtownabbey and was considered “a leading Orangeman”. He had also “played football as a centre-left for Linfield in the 1950s.” Forsythe was MP for the constituency until his death in 2000.

Maginnis had contested the 1981 Fermanagh and South Tyrone by-election caused by Bobby Sands’ death. He was formerly a headmaster at a small primary school in Pomeroy and a UDR major, but resigned from that post when he stood for public office. “A burly, good-humoured man, Mr Maginnis holds fairly moderate views,” his note reads. For example, he opposed the death penalty and was on the “devolutionist wing” of the UUP. The writer predicted: “Not a forceful speaker, he is unlikely to make a major impact at Westminster where he will probably concentrate on security topics.” Maginnis retired from Parliament in 2001 and is now a crossbench peer.

A farmer with a small holding near the South Armagh border, Nicholson was a member of Armagh District Council. He was also a leading Orangeman but, in the NIO’s view, was “[one] of the least impressive of the UUP’s new men at Westminster” although reasons for this assessment were not set out. Nicholson lost his seat to Seamus Mallon in 1986 but is now Northern Ireland’s most experienced MEP, having served in Europe since 1989.

Walker managed “a large Belfast company of timber merchants” and had been at odds with the party leadership as a supporter of Brian Faulkner and pro-Labour MP John Carson. The NIO praised him as a successful businessman and very much a moderate. He shared Carson’s “rather unfashionable views about minority [i.e. nationalist] participation in Government.” The note, though, was critical of his “stolid, almost dull character” and predicted that he would “almost certainly find himself out of his depth”. Walker lost his seat to Nigel Dodds in 2001 and received a knighthood for his work as an MP in 2002. He died in 2007, aged 82.

Taylor’s business interests included a family firm of architects and civil engineers, a hotel in Armagh and a restaurant in Loughgall. He was both a Presbyterian elder and “a leading member of the Orange Order.” The note added: “Mr Taylor is a somewhat mistrusted but nonetheless influential member of the UUP and is thought to have ambitions to become party leader.” He was steering a “careful course” between the integrationist and devolutionist wings: “Something of an enigmatic figure, he may struggle to make his mark”. Taylor went on to become deputy leader and stood down from the Commons in 2001. He is now a crossbench peer.

Jim Prior privately met with John Hume after his maiden speech on 28 June. Hume felt that the speech had been “well received” but also “seemed disappointed … that there was not more interest in Northern Ireland’s and Irish affairs in the House.” Prior had admitted that interest was “sporadic and relatively superficial.”

Hume “still blamed the UK Government for the failure of Sunningdale and for the collapse of the power-sharing executive.” There was no indication that he would participate in the Assembly which was then meeting at Stormont. The summary of the meeting was written by the Secretary of State’s private office. Hume retired as MP for Foyle in 2005.

Rev William McCrea’s political career reportedly began in the Ulster Protestant Volunteers in the 1960s, “leading and organising parades in opposition to the civil rights campaign.” He was sentenced to six months’ imprisonment in 1971 for “riotous behaviour following a demonstration in Dungiven.”

The writer noted that he was both “a popular Gospel singer” but had also “repeatedly advocated the public execution of terrorists.” McCrea was “an articulate but highly emotional speaker… unlikely to go unnoticed at Westminster” but his party leader “may try to exercise a restraining influence.” McCrea lost his seat to Martin McGuinness in 1997 and is now MP for South Antrim.