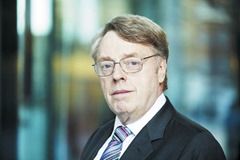 Raymond Snoddy talks to Peter Cheney about how newspapers are adapting to the digital world.

The growth of digital news is the mega-trend in the media but, as Raymond Snoddy notes, one significant nuance within that is that newspapers are increasingly part of the digital offering. Originally from Larne, Snoddy presented the BBC’s NewsWatch programme between 2005 and 2012 and was previously a media correspondent and editor with The Financial Times and The Times.

Many observers initially thought that digital would “wipe out just about everything else” in the media but this has not been the case. While print owners have been slow to respond, they now ‘get digital’ and are professionally marketing news brands rather than papers.

“If you combine the paper reach, circulation and readership with the online [reach], the growth is enormous,” Snoddy comments. “They’ve never been doing better.” The downside is that digital generates less advertising revenue than press.

The Financial Times has a digital first policy as it publishes price-sensitive information. Its paid-for subscription, across print and online, has now reached an unprecedented 720,000 by combining the people who are willing to pay for its information. Its perspective is: “We produce quality information that people will be prepared to pay for so we’re not giving it away for free. And that has turned out to be a very good business tactic for them. It’s a very profitable publication.”

He’s always encouraging his son – a social media executive – to read newspapers. Ignoring print, he notes, creates a knowledge gap and people also miss out on the “serendipity” of print: “You turn a page and there’s something you would never search for in a million years.”

Newspapers also have the advantage of having publishers and editors who have a grasp of their readers’ interests and choose content accordingly – as opposed to a random search for information over the internet. This maintains print’s verification role, which he characterises as: “We checked this information. We don’t get everything right but as far as we know, it’s true.” Aside from the phone hacking revelations, people “still trust the information they get in newspapers” whereas anyone can publish false information on the internet “and get away with it.”

Separately, Snoddy worries that the fragmentation of the media landscape may have an impact on social cohesion with people having fewer shared experiences e.g. of sporting events. Pay-for-view sport excludes a large section of the population as “virtually everything you want to see apart from a minority of sports goes behind pay-TV walls.”

TV sports deals are also bringing telecoms companies (e.g. BT) into television. BT’s motivation is “mostly to protect and sell their broadband business but they feel a need to provide content as well.” That said, the five terrestrial broadcast channels still get a disproportional amount of the audience “given that there are thousands, potentially, to choose from.”