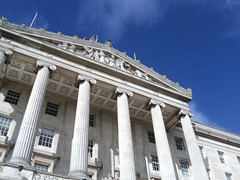 Alex Kane contends that a basic lack of trust is reversing progress and putting Stormont’s future at risk.

I voted for the Good Friday Agreement in the 1998 referendum. It was, I think, the biggest mistake I have ever made. I had concerns at the time – mostly about general accountability and the sincerity of some of the participants – but reckoned it a risk worth taking. Like many others I hoped the absence of violence and the ability of everyone to have a say in how we were governed would, albeit slowly, lead to a new era Northern Ireland and a better way of doing business together.

Well, that hasn’t happened and, as the one-party state of the past morphed into the two parties for two states stalemate we have now, I think we’re actually more polarised than in 1998. Balkanisation is the fixed point of the DUP-Sinn Féin agenda. No post-conflict parties have emerged to encourage fresh thinking and voting habits. Of those bothering to vote, almost 90 per cent vote for the same us-and-them parties. Increasing numbers are switching off and opting out. Our brightest and best are continuing to leave.

Polling and anecdotal evidence confirms that a whopping majority has no expectation of the Executive or Assembly delivering coherent, consensual government. Most surprising of all, the only political growth area has been the rise of a socio-moral conservativism embracing Protestant fundamentalists and the Catholic Church.

Can it get better? Will it get better? Probably not. When the two power blocs can’t agree on something as basic as the constitutional future of the country they’re supposed to govern, it makes it extraordinarily difficult to reach agreement on anything else. They don’t even use the same name for the country. Problems are pushed aside with a petition of concern rather than serious debate and finger-pointing always trumps rational deconstruction and intellectual interaction.

This is all very, very depressing. Just about every vestige of the hope that existed in April 1998 has been ground to dust. In the absence of anything radical, exciting or innovative, ministers pose for ludicrous photo-ops and issue absurd, patently false statements about how ‘wonderful’ Northern Ireland is … “so much better than those bad old days some people want to drag us back to.”

But we are being dragged back. Stormont fell because it couldn’t command the support of a significant section of the electorate. This replacement Assembly is regarded with undisguised contempt by even greater numbers. Crisis follows crisis and direct rule looks like an attractive option again. The Stormont House Agreement has a few paragraphs about reform – including cutting departments, MLA numbers and provision for opposition – yet on closer examination the reform concentrates even more power in the hands of the DUP and Sinn Féin. Worse still, the eleven new super councils already look like mini-me Stormonts, complete with all the tensions and relentless fractiousness.

I don’t think the Assembly can reform itself, primarily because it isn’t in the electoral interests of the DUP and Sinn Féin to do so. They need it the way it is. They like it the way it is. Meanwhile the SDLP and UUP are so thoroughly emasculated that they won’t be able to challenge, let alone eclipse and replace the big two parties, while Alliance is clearly enjoying its role as the limpet on the Executive hull.

My gut instinct is that the Assembly cannot last for much longer. Pretty soon it will hit the one-crisis-too-many moment and the place will just implode: a victim of its own inconsistencies, absurdities, contradictions, hostilities and utter, utter lack of trust.

Where that leaves us is anyone’s guess yet, to be brutally honest, it might be the very wake-up call we need to rethink and reinvent rather than kick everything into the long grass. One thing is certain, though. The present process isn’t working and can’t be made to work. And even the MLAs and leaders, mumbling their “it’s better than it used to be” platitudes, know that the fat lady is on the last verse.