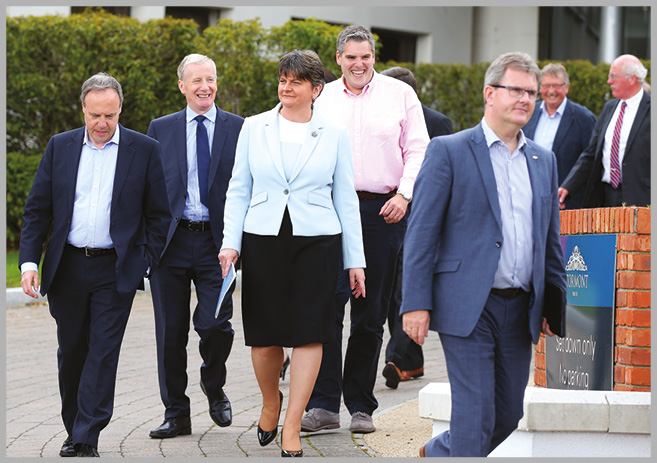 Since the UK general election there has been much media analysis of the DUP and its approach towards Brexit. Owen McQuade unpacks the party’s stance.

The DUP has always supported Brexit. It supports leaving both the customs union and the single market; by default, this will mean a hard border on the island of Ireland unless Northern Ireland is given some form of ‘special status’. Something which the DUP is set against.

The DUP has always recognised that although Brexit will inevitably impact upon its core support among farmers, the party remains strident in its support because, as one of their advisors synopsised, “it will cut all links with the Irish Republic [sic]”. However, after an initial overt enthusiasm for Brexit, the party has been playing the role of reluctant Brexiteers, perhaps as a consequence of the strong reaction from many unionist business people against Brexit. The business community clearly sees the potential negative impact on the Northern Ireland economy.

Despite claiming to want a ‘soft border’ on the island of Ireland, the DUP’s stance is pushing us towards a hard border. To understand the DUP’s approach to Brexit it is necessary to examine what the dominant unionist party has said about cross-border relationships on the island, in contrast with how it has behaved.

Arlene Foster was Enterprise Minister for almost seven years in the devolved administration with a brief to grow tourism, an area badly hampered by the legacy of ‘the Troubles’. However, her only notable cross-border interaction was to pose for the occasional publicity photograph with her counterparts south of the border, while simultaneously obstructing any credible cross-border tourism initiative.

For example, the Irish Government’s very successful tourism initiative The Wild Atlantic Way terminates at the Donegal-Derry border, while the island’s Atlantic coast obviously does not. Likewise, tourism officials were also frustrated with the former DUP Minister’s refusal to bring a further tourism strategy to the Northern Ireland Executive, as she thought it too ‘green’. The strategy targeted more visitors from the Republic and recommended an enhanced emphasis on the Irish aspects of the Northern Ireland brand.

I personally chaired several roundtable discussions with officials over this period and their frustration was palpable. As one official source put it to me: “If Arlene Foster had to choose between cross-border tourism or no tourism, she would pick no tourism.” She acted accordingly.

Perhaps the most striking aspect of this ‘hard border’ approach to all-island co-operation was the constraining of IntertradeIreland, a body set up under the Good Friday Agreement to foster cross-border trade. I facilitated the first workshop between officials from both sides of the border and after initially enthusiastic beginnings under the first devolution-era Economy Minister, the UUP’s Sir Reg Empey, the cross-border body has since achieved little of real consequence.

So, where does that leave the DUP on Brexit? Much like its approach to cross-border tourism and trade, the DUP implies that it favours a soft Brexit but in reality, it desires a hard Brexit. Like its thinking on stifling cross-border tourism, while Brexit will undoubtedly hit the Northern Ireland economy, the potential to disrupt all links with the south is too alluring a prospect to let slip by.

Precedence tells us that, in spite of the rhetoric around the need for a ‘soft’ or ‘porous’ border, soon we may well be facing the real prospect of a hard border on the island of Ireland against a backdrop of DUP hand-wringing and apportioning of blame.