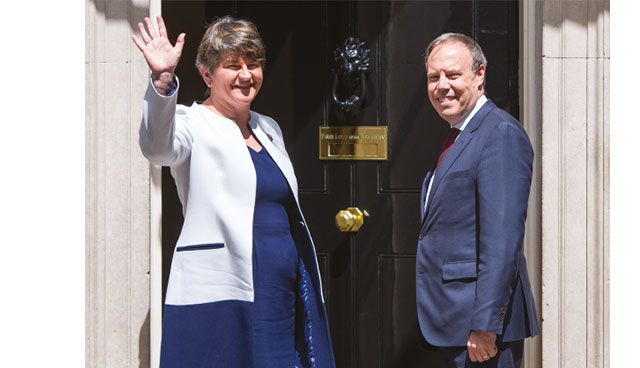 In both Britain and Northern Ireland alike, the 2017 Westminster election has polarised the electorate to an extent not visible in decades.

Theresa May’s gamble to secure a sizeable majority and consolidate national divisions in what was ultimately an unofficial referendum on the Tory Party’s Brexit strategy boomeranged in spectacular fashion. In an act of polarisation, over 80 per cent of the UK electorate opted to augment one of two diametrically opposed ideologies.

In an act of apparent political self-harm, May played a parody of herself in a dismal campaign which saw a seemingly unassailable polling lead unravel. Caricatures now portray the Prime Minister as incompetent, robotic and blinded by hubris. Survival rests on a knife-edge. As George Obsorne dines on schadenfreude, it remains to be seen from whence Brutus’ lethal thrust will emanate, if at all.

The deep fractures in UK society now loom larger than ever while the Tories find themselves licking wounds opened by the loss of 13 seats and the subsequent return of a hung parliament. Any semblance of ‘strong and stable’ governance relies on the ability to find an appropriate suitor to ensure a partnership which does not constitute a ‘coalition of chaos’. Enter the DUP.

The DUP has faced a relentless barrage of scrutiny emanating from the British media hordes. This analysis, coupled with wider events, has enabled the Tories to take a breath and dust themselves down from their electoral pummelling. As a consequence, several Tory doyens, including John Major, have voiced concerns about any form of arrangement.

The DUP leadership has endeavoured to extract as many concessions from Theresa May as possible. However, there is a danger of overplaying its hand. While the Tories appear content to flirt with their “friends in the DUP” until such times as an alternative materialises, they have seemingly rolled back on their initial eagerness to secure a deal.

While May called time on the negotiations to some degree by scheduling the Queen’s Speech, a deal remains elusive. Tory trepidation has been allowed to fester and ferment amidst a protracted bargaining process. Having fashioned a more socially liberal image under David Cameron, there are fears that the post-election kneejerk to secure an informal agreement with what is essentially a fringe party (the DUP attained less than 1 per cent of total UK votes) would cause disproportionate damage to the Tory brand. A post-election Times/YouGov poll, indicating that only 8 per cent of the public have a ‘favourable’ perception of the DUP, paints Tory flirtations in stark light.

“Corbyn has won the ideological argument within the Labour party.”

Regardless, it seems likely that the DUP would lend tacit support to a Tory Government on an issue-by-issue basis, even in the absence of an informal confidence and supply agreement, lest they inadvertently assist Jeremy Corbyn. As such, a Tory minority government could viably work.

Owing to the Fixed Term Parliaments Act, once the initial obstacle of the Queen’s Speech is overcome, the Government can concede any number of defeats in the House of Commons without falling. A confidence issue has been so narrowly defined that it even theoretically excludes the Budget.

Jeremy Corbyn’s Lazarus-like revival of Labour’s fortunes constitutes a victory in defeat. His steady yet relentless resurgence in the polls and net gain of 30 seats owes much to the anti-austerity platform put before the electorate.
For the first time in decades there is now a clear ideological divergence between the Labour Party and the Conservatives. Less than one million votes (2.4 per cent of the vote) ahead of Labour, the Tory manifesto has been shattered and Corbyn has positioned his party in an ideal location should there be a second election.

The Conservative campaign descended into near-farcical scenes, with Prime Minister May adopting Trump-esque levels of media restrictions. Meanwhile, Corbyn played to his strengths, in the face of a furious media barrage, and managed to reignite an energy in Labour which was reminiscent of its post-war heyday, attracting huge crowds to his public appearances.

Labour’s social media campaign tapped into widespread urban disillusionment as epitomised by the widespread support Corbyn received from renowned UK grime music scene notables. This is exemplified by the degree to which he captured the youth vote, with 18-24 year olds splintering 66 per cent to 18 per cent in favour of Labour over the Tories. In the midst of a similar age-based polarisation of voters over the issue of Brexit, it is now feasible to reason that age has as much bearing as social stratification.

It now appears likely that, in spite of significant opposition to his leadership from within the parliamentary party, Corbyn may yet manage to heal the wounds of division in his party as minds turn towards the prospect of a further election. As one Labour source suggested: “Corbyn has won the ideological argument within the Labour party.”

In the Republic, meanwhile, after an intensive campaign, Fine Gael’s Leo Varadkar successfully obtained 60 per cent support against Simon Coveney’s 40 per cent to be elected as the new party leader, despite receiving only 35 per cent of grassroots membership support. The 38-year-old subsequently assumed the office of Taoiseach, becoming the youngest in the history of the State. His appointment became of global note owing to the fact that he is both openly gay and the son of an immigrant. Following the leadership contest, Varadkar stated: “I think if my election as leader of Fine Gael today has shown anything, it is that prejudice has no hold in this Republic.”

Nominating his successor for appointment by the President to be Taoiseach, Enda Kenny stated: “Having worked closely with Deputy Varadkar throughout his political career I am confident that he will carry out the role of An Taoiseach with energy, integrity and skill.”

However, Fianna Fáil leader Micheál Martin scathingly suggested: “Even his most ardent supporters have had to strain themselves to claim that he has more than a modest policy record as a Minister.” Despite this, Varadkar was aided in his appointment by the Irish Government’s confidence and supply arrangement with Fianna Fáil and the abstention of that party’s 44 TDs during the Dáil debate in which his nomination was declared carried with a ratio of 57:50.