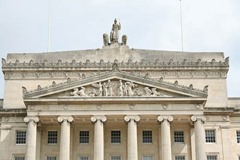 In an assessment of the 1982-1986 Assembly, the DUP appeared to dismiss Northern Ireland’s influence at Westminster and point to devolution’s effectiveness.

A brief research paper from 1983, almost certainly written by the DUP, dismissed Northern Ireland’s influence at Westminster but pointed out that the Assembly was already starting to deliver. Secretary of State Jim Prior had set up the Assembly in 1982 and hoped to see ‘rolling devolution’ as parties gradually agreed to take back powers from London.

The paper had fallen into the hands of the NIO. In a handwritten covering note, an official mentions that the document “appears to have been produced by the DUP”. Dated 29 April 1983, it is entitled ‘The Success of the Assembly’ and starts with four quotes from SDLP and UUP representatives criticising the Assembly.

By contrast, the authors found that “even at its first stage the Assembly has more power” than the 12 Northern Ireland MPs at Westminster. There had only been “very few occasions” when local MPs had “held the balance of power which has enabled them to get concessions from the government of the day.”

When a government had a majority of 60 or more, the MPs were “probably an irrelevancy in the law making process” and their power was “no more than that of the Assembly Members if even that.” Northern Ireland debates in the Commons “often take place late at night and the time is very limited.” However, at Stormont, legislation could be examined in detail, evidence could be “fully collected” and ministers and civil servants “questioned … at reasonable hours of the day.”

Officials at Stormont had faced “embarrassing questions” e.g. about school closures and civil servants “now feel much more accountable than they did under direct rule.”

The last phrase is telling, as direct rule was technically continuing. The DUP was the most enthusiastic supporter of the Assembly and, it appears, was making headway. The UUP was divided between devolutionists and integrationists who preferred making direct rule accountable at Westminster.

“Perhaps the most spectacular success” was a package of economic reforms proposed by the Economic Development Committee and then fully adopted by the UK Government. This included lower corporation tax (announced through the Budget), better advisory services for small businesses, complete industrial de-rating and a drive to attract high quality managers into industry. The DoE would also bring forward legislation to curb sex shops.

The paper claimed that UUP members were “so vociferous for the return of power and so dogmatic in their right to rule” that they “have given little or no time” to the Assembly committees. The authors sarcastically highlight eight Ulster Unionists as “star performers” due to their poor attendance.

The Assembly stalled due to a boycott by nationalists. It was abolished in 1986 as Margaret Thatcher pressed ahead with the Anglo-Irish Agreement. The share of seats was as follows: 26 Ulster Unionists, 21 Democratic Unionists, 14 SDLP, 10 Alliance, five Sinn Féin and two independent unionists. In practice, the DUP therefore held a third of the seats in the House.