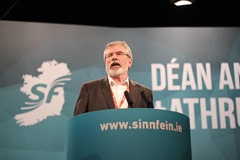 Ahead of an ambitious year for Sinn Féin, Derry became the latest city to play host to the party’s ard fheis.

In the prelude to impending Westminster, Assembly and Dáil elections, the primary theme of this year’s Sinn Féin ard fheis was unambiguous: preparation for government. Under the banner ‘Déan an tAthrú – make the change’, approximately 3,500 delegates and observers attended the event in Derry’s Millennium Forum on 6-7 March. Members debated over 200 motions and speeches broadly focused upon the economy, opposition to austerity, the transfer of fiscal powers to Stormont, rural communities, equality and reconciliation.

Away from the main hall and during intervals, a series of eight diverse fringe events were staged. Most notably, representatives from the Londonderry Bands Forum were invited to deliver a presentation on the culture of unionist marching bands. Commending their courage and confidence, Martin McGuinness cited their presence as an example of the changing society on the island and referred to reconciliation as “the next vital stage of the peace process.” Meanwhile, 52 exhibitors and 30 campaign groups, which ranged from the Integrated Education Fund to the Open University to the Alzheimer’s Society, set out their stalls.

Keen to exhibit its internationalist character, the party ensured that an array of foreign dignitaries featured prominently throughout the annual conference. Addressing delegates, Syriza’s Euclid Tsakalotos, the Greek Government’s Chief Economic Spokesman, twice received a standing ovation and maintained: “We do not have to accept the status quo.” Additional guest representatives included the Palestinian Ambassador to Ireland Ahmad Abdelrakez, Gorka Elejabarrietta from the Basque socialist party Sortu and Sue van der Merwe from the African National Congress. Opening his presidential address, Gerry Adams welcomed the international guests in attendance, including representatives from the United States, and called on the Irish Government to recognise the state of Palestine.

Throughout the ard fheis, attention was firmly focused upon economic affairs, rural Ireland and the diaspora. Adams stated: “Sinn Féin will continue to oppose austerity – north and south.” In addition, he pledged to introduce a third rate of income tax in the Republic for those earning over €100,000: “seven cents on every euro over €100,000.” Voicing Sinn Féin’s opposition to water charges and local property tax, Mary Lou McDonald was unequivocal, stating: “When we say that we will abolish water charges at the first opportunity, we mean it. When we say that will abolish property tax, we mean that too.” Ahead of the general election in the North, Chris Hazzard argued: “There may be a change of rosettes at Westminster but there will be no change in policy – we must recapture democratic control of Ireland’s economic resources and political institutions from a London-centric élite.”

The Fine Gael-Labour coalition faced a barrage of criticism from within Sinn Féin ranks. Pearse Doherty questioned: “How can the very people who acted so unfairly during the recession be trusted to deliver a fair recovery? Do you honestly believe that under Fine Gael, any upturn in our economy will be felt by the working classes? Do you believe that the Labour Party, the same party which cut child benefit and jobseeker’s allowance, is in any way interested in restoring dignity to the masses?”

In a swipe at previous governments, Lynn Boylan stated: “For the first time in the history of the state, the people of Ireland can elect a government that breaks the right-wing Civil War politics of Fine Gael and Fianna Fáil.” Receiving rapturous applause from the assembled delegates, Matt Carthy proclaimed: “It is now clear to almost everybody that that following the next Leinster House elections that Fine Gael and Fianna Fáil will be together. The only question remaining is whether they’ll be together in government or in opposition. Our job is to make sure that it’s in opposition.” 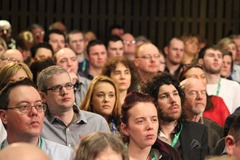 There was a rigorous standard of debate on the issue of lowering corporation tax in the North. A Limerick cumann proposed that, while supporting the principle of a transfer of tax-varying powers from London to the Executive, “the role of a democratic socialist party should be to argue for more effective implementation of current rates of corporation tax”, and to reject “a reduction in corporation tax which would increase the profits of global corporations”. However, this motion was lost when the ard fheis voted in support of a careful and considered variation in tax rates in correspondence with any potential creation of sustainable, high quality jobs and economic growth.

In a rare moment of public dissent, Daisy Mules, a representative from the Pádraig Pearse Cumann, articulated her criticism around the structuring of motions by the party leadership. Motion 125, proposed by the Derry-based branch, suggested that “women’s reproductive rights, and control over a woman’s body and sexuality are entirely a matter for the woman concerned in each particular circumstance”. However, following the endorsement of motion 122 which moved to support a woman’s choice to have an abortion in the case of fatal foetal abnormality, motion 125 was automatically nullified and thus not put to delegates.

Regardless, Michelle Gildernew acknowledged: “While we may have differing views and opinions on issues such as abortion, education [and] budgets, we are all agreed on this one subject: Irish unity.” The establishment of a united Ireland was reaffirmed as “the primary political objective of Sinn Féin,” while “the 1916 Proclamation remains the mission statement of modern Irish republicanism.” Accordingly, the party used the ard fheis as a platform to reiterate its call for an island-wide referendum on Irish unity in the next term of both the Assembly and the Dáil.

Most significantly, during the concluding speech of the conference, Gerry Adams declared: “Sinn Féin wants a mandate for government. I believe we can win that mandate. Sinn Féin will not prop up either a Fine Gael or Fianna Fáil government. Sinn Féin wants to lead the next government.” In the event, it is likely that McDonald rather than Adams would take on the role of Taoiseach though she has maintained: “That would be an interesting prospect but I wouldn’t be so presumptuous.”

The forthcoming Westminster election will prove to be a fertile training ground for Sinn Féin electioneering activists who will be vital to the Assembly and Dáil campaigns. With the party regularly polling above 20 per cent in opinion polls in the South, the leadership has set its sights on a government position. Overall, Sinn Féin’s message at this year’s ard fheis was one of assured optimism. Mary Lou McDonald concluded: “We are preparing for government. We are ready for the challenge. We are ready to deliver.”