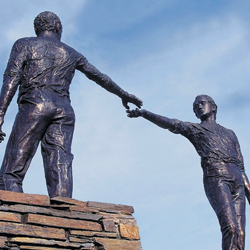 The Executive’s plans for greater integration are due to be published this autumn, after long delays, but critics question the political will for change.

Finalised plans for a cohesion, sharing and integration (CSI) strategy are expected from OFMDFM this autumn but the UUP and Alliance Party are increasingly sceptical about the two largest parties’ commitment to a shared future.

In their joint statement on 18 July, Robinson and McGuinness explained that they have received a report from their representatives on the cross-party working group and claimed that “considerable progress” had been made. They will meet the other leaders of major parties in early September to “conclude the process”.

Announcing his withdrawal from the group the following day, UUP representative John McCallister said that a statement in the middle of the summer recess demonstrated the main parties’ “disdain for the democratic process and the rather low value they place on the opinion of others.”  The SDLP remains on the group and has no plans to leave.

Education and public housing are the most visible examples of segregation.

As promised in the Programme for Government, a ministerial advisory group on advancing shared education was announced in July and is due to report back to Education Minister John O’Dowd by 1 February 2013.  The Minister’s definition of shared education, though, covers all ‘section 75’ groups rather than focusing on the main Protestant-Catholic divide.

Alliance wants to see a minimum of 20 per cent of children educated in integrated sector schools and 40 per cent in mixed schools (of all types) by 2020; the status quo is 6.6 per cent and 10.5 per cent respectively.

Both the DUP and UUP are calling for a single, integrated education system, and have become more vocal after Alliance’s election successes in recent years.  The SDLP and Sinn Féin support a mixture of sectors, citing the need for parental choice.

The Programme for Government contains no commitments on shared housing.  The decision to establish two separate Protestant and Catholic housing estates on the Girdwood Barracks site prompted Alliance to withdraw from the working group in May.

Alliance wants the Housing Executive to have a duty to “encourage and facilitate the creation of mixed housing”.  However, this has been opposed by the other main parties who say that change should be led by communities on the ground and meeting need should be the overriding priority.

Sinn Féin has no specific manifesto commitments on integration or sharing, and has regularly emphasised that equality between different groups in society should take priority over good relations.  This was the thrust of its policy paper on integration in September 2009.

The high percentages suggest an element of ‘response bias’ i.e. giving the most acceptable answer to the interviewer.  That said, similar trends have been recorded in other surveys from the 1960s onwards and suggest that public support for a shared future is well-established.