The Scottish Government’s approach has been credited by the Organisation for Economic Co-Operation and Development (OECD) as the most developed outcomes-based approach by any government in the world. Permanent Secretary to the Scottish Government, Leslie Evans, discusses how this was achieved through the country’s National Performance Framework and how it has brought power and decision making back to the community.

Evans states that Scotland, and the rest of the world, is facing a future that can only be described as VUCA – “volatile, uncertain, complex and ambiguous”. It is for that reason that she has been “leading a programme of organisational change to make our organisation more open, more capable and more responsive”.

Constitutional change “dominates the recent and current Scottish context”, Evans says: “Our Scottish Parliament was established in 1999 and has been led for the majority of its time by coalition and minority governments. We’ve seen a referendum on Scottish independence, with a turnout of 84 per cent, and an unprecedented level of engagement by young people. As well as turnout of 81 per cent by those least likely to vote.

“We’ve seen changes at Westminster, not least the Brexit vote, which played out very differently in Scotland. Scotland shares other VUCA conditions with Ireland and other countries: we’ve been through the economic crisis of 2008 and the fragile recovery,” she outlines.

That fragile recovery has widened socioeconomic chasms and created the largest geopolitical shifts in a generation, of which Brexit is but one symptom. Evans is cognisant of such continued and deeply-entrenched inequalities, as she points out: “It’s worth remembering that for some people, life has always been VUCA.

“The First Minister Nicola Sturgeon often asks Scottish citizens: ‘What kind of country do we want to be?’ The answer is rooted in the lived experiences of people, in their aspirations and their aspirations for their children.”

The legislative guide for the work undertaken to find these answers is the Scottish Government’s National Performance Framework (NPF), first introduced by the Scottish National Party led minority government in 2007. Evans says that 2007’s government came to power “very keen to establish strong, competent government and they introduced the first NPF with a focus on long-term, joined-up outcomes”, which “allowed us as civil servants to chart progress in a range of social, environmental and economic indicators”.

“This thorough transformation affects what public services should strive to do, the actions they take and how they organise themselves to make it happen,” she says. “We had to work on ensuring a shift from what public services provide to what citizens and communities actually need, which meant turning our gaze from the producer to the customer.”

The acclaim afforded to the Scottish Government by the OECD is due in no small part to the constant refreshing of its approach and focus on integration. “Our partnership approach means that we now have a framework with national and local governments as co-signatories,” Evans explains. “Because this framework became enshrined in law in 2015, it now represents the way we govern in Scotland. It doesn’t matter who comes into power, this is the way we do it. The framework reflects a vision for Scotland that we all want to see, not just reflecting the goals of one political party, one government or one set of public services alone.”

The partnership approach also allows the public services to have a firmer footing in local communities, which is strategically important given that, as Evans points out, the worst cases of deprivation are usually localised. As an example, she explains how the Scottish Government is now responsible for “several aspects of social security and ministers are committed to introducing a distinctly Scottish approach, weaving a culture of dignity and respect into the fabric of Social Security Scotland. We’ve formed experience panels to inform major decisions and have almost 2,500 people with lived experience of the current system to show us how to improve.”

With Scottish public service departments legally required to work together, integration becomes inevitable. Health and social services have been integrated, while Scotland now has one national police force, along with one national fire and rescue service. The process has not been without its challenges, Evans acknowledges: “Our local authorities in health boards have struggled to balance their share of health and social care integration with other responsibilities, but integration is yielding early returns: in our last financial year, the number of unscheduled hospital bed days fell by 6 per cent.”

Changing times and generations require technological change too: “Our public services need to work in different ways in different places to understand and meet the needs of different communities. Young people have very different expectations for public services, there is no nostalgia there for the founding of the NHS, just frustration that you can’t register online with a GP. 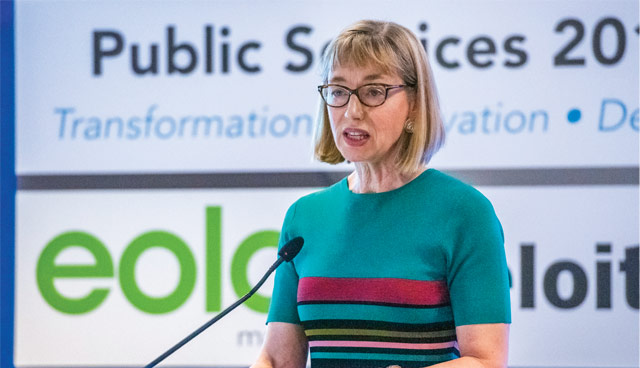 “The Scottish Government’s CivTech programme is at the forefront of innovation procurement, harnessing new technologies to drive innovation in the public sector. Key to this is identifying the problems that need to be solved and then letting loose the nation’s tech sector to find the best solutions. Digital transformation is essential given the greater demands and tightening budgets.”

Supplying those best-placed to affect change is a constant theme of Evans’ vision of governance, she is also keen to praise the Community Empowerment Act, which aims to have 1 per cent of all local council budgets decided within the communities by 2021. “We must work with and through others, including our communities and make the most of our talent by empowering our teams,” she says.

“One example is Glasgow Housing Association, which has devolved significant responsibilities to its workforce. Staff have found creative ways to assist their tenants, even in non-housing issues, which have a bearing on their tenancies. The results are striking: tenant satisfaction has improved from 67 per cent in 2008/09 to 92 per cent in 2018. Rent arrears have fallen by almost two thirds, as have staff sickness levels and the organisation has made savings of almost £3.5 million because they require fewer managers.”

It is a public service reacting to Scotland’s changing makeup too: the Scottish Parliament has set a statutory objective for women to make up 50 per cent of public service board members by 2022, and Evans points out that both the Cabinet and her senior management team are gender equal. Scotland’s minority ethnic population is around 4 per cent, with over 3 per cent of senior civil servants declaring as minority ethnic.