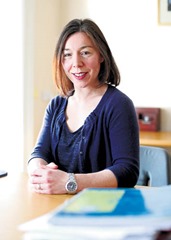 Since taking up the editor’s chair at the Impartial Reporter earlier this year, Sarah Saunderson has seen it named as the Best UK Weekly Newspaper at the British Press Awards. Sarah joined the Fermanagh paper as a reporter in 1994 and was assistant news editor from 1997 onwards.

After school, I went to Edinburgh University and joined the ranks at the student newspaper there. I worked mainly on arts reviews and as a result got to see lots of plays and comedians playing in Edinburgh’s many arts venues and write about them for the paper. I got a place on a post-graduate journalism course in Glasgow, which was delivered by Strathclyde University and Glasgow Caledonian University. I freelanced for a while in Glasgow after graduating, before coming home where I got a job as a journalist working for The Impartial Reporter.

Who have you most admired?

My mentor and the person who has probably had most influence on my career to date is former Managing Editor Denzil McDaniel. He was an incredible boss whose belief in me as a journalist meant that I always strived to live up to his expectations. He is a really talented editor who showed kindness, encouragement and backbone when it mattered. He always backed his staff. The respect we all have for him at the Impartial is immense. If I can do the job half as well as he did, I will have achieved something. I admire him hugely.

Someone who showed me that a woman can achieve in what is seen as a man’s world is my step-mother Joanna McVey. She has also worked incredibly hard within the community sector in Fermanagh and I really admire her generosity of spirit and willingness to share her talents for the benefit of others. I also admire my father Ken for his patience, for being able to keep a cool head and his ability to turn the other cheek.

What have been your most significant stories?

On a personal level, it is great to make a difference to people on a local level by giving them a voice. In my time as a reporter, I did quite a few stories about health. I worked in particular on the issue of women who were waiting months to see a consultant after finding a breast lump. I followed the story of one woman during her agonising wait to see a specialist and reported on the subsequent efforts by the health trust to improve their service.

Also, a few years ago, I discovered by doing a survey of dentists that only one surgery in the county was taking on new NHS patients and parents were finding it impossible to get a dentist for their children without having to pay for treatment. It was particularly problematic given the dreadful rate of tooth decay in the area. The issue was subsequently addressed and a new service opened in Fermanagh, taking on 10,000 NHS patients.

What helped the Impartial to win the award?

The staff. We have a committed, talented, loyal and incredibly hard-working team of journalists, photographer and page designers. They put in a huge effort to create the best newspaper that we can each week. They have also embraced changes such as social media and breaking news on our website.

Whether it is the big occasion, like the G8 summit which came to Fermanagh last June, or a diary marking like a council meeting, I know they will do a great job covering the story. They always look for the new angle and really care about the job. 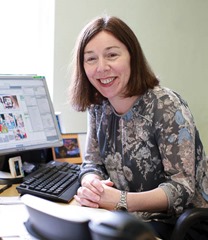 Where do you see the paper going?

The Impartial Reporter has not been afraid of embracing the digital age. Our website has significantly increased its audience this year and we use platforms such as Twitter and Facebook to market our brand and get our message out. As well as producing strong, award-winning coverage in the newspaper, our journalists tweet from key events and sporting fixtures. We offer a multi-media package that is about building audience that gives local news to people the way they want to access it. I see us continuing to develop this in the coming years.

What do you enjoy most about working on a local paper?

Specifically, I really enjoy working with the team at The Impartial. They are inspirational and enthusiastic. I love it when someone comes through the door with a great idea or having been given some information that you just know has the makings of a great story. No day is ever the same and I thrive on the variety. I love being part of a team bringing stories to the public’s attention that make a difference to people’s lives.

I think The Impartial must be in my blood. My grandfather and grandmother, Bertie and Norah Saunderson, both worked in the print works, as did my great-aunt Gertie Fleming. I was brought up in Fermanagh and I really care about the place and the people – and I think The Impartial plays a really crucial role in the community. It is satisfying to do a job that you think matters.

There is also tremendous satisfaction looking at a well-designed page featuring great writing and cracking photos – and that is all down to team effort. Or equally, seeing a story we broke on our website racing becoming ‘most read’ and getting a response from thousands on our social media sites.

Before I took on this role I was a very keen amateur actor, taking part in plays with the Enniskillen Amateur Dramatic Society, but that has taken a back seat for a while. I love to read, both newspapers and novels.

I really enjoy meeting up with my friends but I probably don’t do that often enough. I have a group of friends from school who I am still really close to. I also love meeting up with friends I used to run regularly with. I treasure weekends spent in County Donegal with my family. We go into the sea sometimes twice in the one day and I am enjoying my young son learning to surf. I love walking or running on the beach or going for a cycle. All the fresh air makes me feel alive.