Two years on from the publication of 44 recommendations by the RHI public inquiry, only 18 have been fully implemented and only one person has been disciplined by way of written warning. 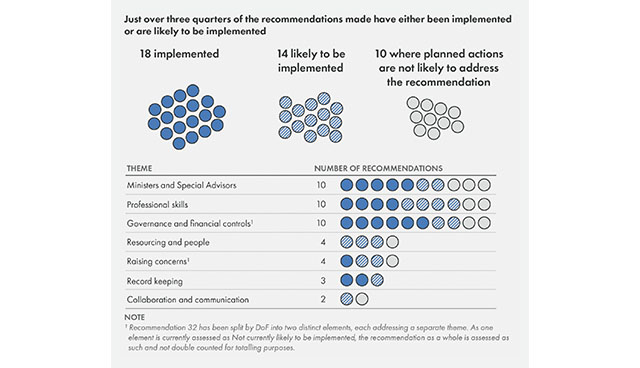 Of the 44 recommendations made by the RHI Inquiry, 18 have been implemented and 14 are deemed likely to be recommended but the Audit Office assesses there are 10 areas with planned actions, which are not likely to address the recommendations.

Looking at the period up until September 2021, the report provides an update on the non-domestic RHI scheme and tracks progress by the Northern Ireland Executive and Northern Ireland Civil Service (NICS) in implementing the recommendations from the RHI Inquiry.

Following the publication of the RHI Inquiry recommendations, the Executive established a dedicated sub-committee on reform to oversee the response by government. In July 2020, the sub-committee committed to producing an action plan by autumn 2020. Despite a revision of the commitment pushing the intended production deadline to Christmas 2020, both timelines were missed, with an Executive Response to the RHI Inquiry Report Recommendations and Action Plan finally published in October 2021.

Following their assessment report, the NIAO made three recommendations, including:

• that the Group Internal Audit and Fraud Investigation

with requirements for the DoF to maintain and publish

registers of declared interests, lobbying and meetings as appropriate;

• that attendance at departmental inductions and

should be regarded as compulsory within a reasonable

timeframe of assuming their position, as circumstances permit; and

processes for record keeping across all departments on

an ongoing basis, particularly where matters should be documented for complex or major decisions.

“Two years on from the publication of the RHI Inquiry Report, progress in addressing the recommendations has been disappointing in areas. Only 18 of the recommendations can be categorised as implemented and in some themes, there has been minimal progress,” the NIAO report states.

Also included in the Audit Office’s report were details around the outcome of disciplinary proceedings instigated against a number of civil servants involved in the RHI scheme.

The Audit Office describes it as “surprising” that only one individual has received a written warning for misconduct in the context that the gravity of the issues discussed during the RHI Inquiry “would have led most people to believe that significant disciplinary consequences would have arisen from it”.

In November 2019, an adapted disciplinary process was agreed by the NICS Board, and a subsequent independent panel was established by the Department of Finance in March 2020 to consider the RHI Inquiry’s report and identify any potential disciplinary charges. This panel, external to the NICS, was to identify potential disciplinary charges for an internal NICS panel, made up of three Permanent Secretaries, or, if related to an NICS staff member above grade 3, a separate UK Government Cabinet Office panel.

The external panel recommended disciplinary charges be considered against 11 individuals. On consideration, the internal NICS panel and a Cabinet Office panel concluded that charges of gross misconduct should be considered for six individuals and misconduct for

In May 2020, in proceedings against four individuals, misconduct charges for three individuals were not upheld, while one individual received a written warning of misconduct. Six remaining cases were stayed following the initiation of a judicial review in June 2020.

In January 2021, following the standing down of the Cabinet Office panel, which had been due to consider two cases, disciplinary hearings saw the Cabinet Secretary conclude that the pair had no case to answer.

In Northern Ireland, following resolution of the legal action, the NICS offered three remaining individuals the choice of going through the same adapted process as the four other NICS cases considered, or the disciplinary process as established in the NICS handbook. All chose the handbook process, and following a preliminary enquiry, a determination was made of no further action in each case.

Although expressing their surprise at the outcome, the NIAO said that they were satisfied that the disciplinary process appears to have been followed properly.

In December 2021, Finance Minister Conor Murphy MLA, in a written statement to the Northern Ireland Assembly, described the staying of the adapted disciplinary process under the threat of legal action as “clearly concerning”.

Murphy added: “I have commissioned a full review of the NICS disciplinary policy. This is underway and will determine any potential improvements to the policy and its implementation.” 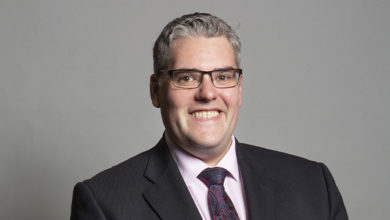