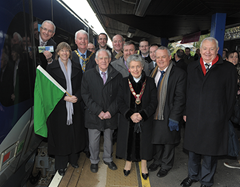 Hundreds of people from civic dignitaries and school children to business and community representatives joined Translink celebrations on March 22 to mark the official re-opening of the railway line between Derry~Londonderry and Coleraine.

Hailed as “one of the most beautiful rail journeys in the world” by travel writer Michael Palin, it is clear why such strong public support exists for this important route.

Passing through some of Northern Ireland’s most stunning scenery from the golden sands of Benone Strand to the maritime cliffs at Downhill and the impressive Binevenagh Mountain, the journey lures both local passengers and visitors to Northern Ireland.

The upgrade project was finished ahead of schedule, marking the completion of the first phase of a £30 million Translink Track Renewals Project funded by the Department for Regional Development and the Trans European Transport Network Fund.

It secures the long-term future and sustainability of the Northern corridor rail link which provides vital connections to jobs, colleges, universities, shops, businesses and local attractions.

As the official public transport partner of the UK City of Culture, Translink has ensured that travelling by train is an attractive way to reach Derry~Londonderry and enjoy the city’s celebrations. Other key project benefits include: maintaining high safety standards and line reliability, improving drainage and a reduction in future maintenance. 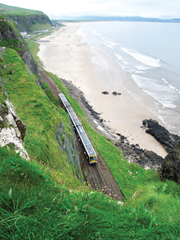 The popularity of train travel in Northern Ireland continues to rise with over 80 per cent growth in Translink Northern Ireland Railways passenger numbers in the last 10 years, exceeding a record-breaking 11 million journeys during 2012-2013.

The revival of this particular journey helps strengthen the economic landscape in the North West and accommodate increasing numbers of passengers on local rail services.

Following public consultation, the development of a new North West Train Timetable also means it is the first time in the history of the railways in Northern Ireland that a train service arrives into Derry~Londonderry from Belfast before 8.30am. A ‘Try the Train’ campaign has also been launched to encourage those who live along the line to use it.

Looking ahead, Translink’s vision is to run an hourly train service between Derry~Londonderry and Belfast from 2015. This will require essential funding to complete Phase 2 of the Renewals Project which Translink plans to commence in 2014.

In addition to significant track work, Translink is currently inviting public feedback on proposals for a new train station in Derry~Londonderry. To date, funding is not available but Translink is looking at the feasibility of upgrading and/or relocating the train station.

It is now a priority to secure essential funding to deliver these next major developments that will support economic development in the North West and provide Translink customers with attractive, reliable and good value services.