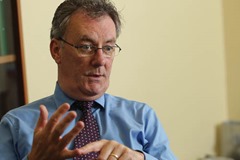 Mike Nesbitt’s proposed Defamation Bill aims to bring Northern Ireland back into line with England and Wales after the UK Government’s legislation was held up in the Executive.

The Defamation Act 2013 received royal assent on 25 April and fulfilled a pledge made in the Coalition Agreement. It narrows the definition of defamatory statements to those which have caused or are likely to cause “serious harm” to the claimant’s reputation. The Act also clarifies the three main defences in libel actions: truth, honest opinion, and the public interest.

It received all-party support in Parliament and is also supported by the UUP, SDLP and Alliance Party. Sinn Féin has not yet commented on the legislation.

However, it was not extended to Northern Ireland as the Executive did not discuss the issue. The Department of Finance and Personnel is responsible for civil law and then Finance Minister Sammy Wilson said that he would prefer the law be developed through the courts.

Fellow DUP member Ian Paisley Junior claimed that ordinary people “feel that they have no protection” from unfair media reporting and was disappointed that “this law could have the effect of creating even greater freedom for the press.”

Nesbitt’s Bill mirrors the Defamation Act and the party hopes to take it through the Assembly by June 2014. The former journalist has said that Northern Ireland should not “operate the most repressive of libel laws while Great Britain supports the right to express honest opinion and raise matters of public interest.”

Firstly, print and broadcast journalists may be forced to drop investigations. Daily Telegraph executive director Lord Black has said that this would result in “poor government, bureaucratic cover-ups and, at worst, corruption.”

Secondly, the province’s reputation could be damaged if academics and investors in the creative industries are deterred. Film-making, publishing and software all rely on editorial content. The academic freedom point was made by Paul Bew, writing in agendaNi in July (issue 59, page 144).

Finally and most significantly, UK and Irish national newspapers may decide to stop circulating in Northern Ireland. Over the last year, The Independent and its sister paper (the i) have been withdrawn as local sales failed to cover the costs of circulation. The expense of publishing separate regional editions may result in more withdrawals from the market.

The UUP plans to start a consultation on the Bill this autumn and hopes that it will become law by June 2014. The party, though, will firstly consult new Finance Minister Simon Hamilton to check whether his view differs from that of his predecessor. Hamilton has regularly been critical of the media but he has not yet commented on defamation law.