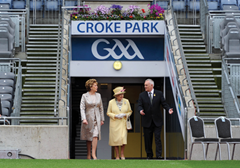 As Her Majesty the Queen put it, it was “impossible to ignore the weight of history,” during the royal couple’s four- day visit to Ireland.

The first British monarch to visit the Republic of Ireland, Queen Elizabeth received her invitation in 1993, but the governments decided she should attend now that the peace process is more stable. Ireland’s largest ever security operation (which included 8,000 gardí, 2,000 Irish soldiers and 120 Metropolitan Police officers) was put in place to ensure her safety. Her grandfather George V was the last member of the royal family to visit Ireland 100 years ago, before the creation of the Irish Free State in 1922.

In advance of the visit, President McAleese predicted that it would be an “extraordinary moment in Irish history” and the general consensus is that she was correct.

Queen Elizabeth’s packed schedule was rich with culture, symbolism and ceremony, and events in Dublin and Cork were watched by rapt audiences within Ireland, the UK and across the globe.

Her speech at the state dinner in Dublin Castle was hugely anticipated amid speculation that she might apologise for past British actions in Ireland. In an unprecedented move, her opening remarks were spoken in Irish: “A Uachtaráin agus a chairde” (President and my friends). She went on to acknowledge: “It is a sad and regrettable reality that through history our islands have experienced more than their fair share of heartache, turbulence and loss.”

In a reference that applied to her own family, she said: “These events have touched us all, many of us personally, and are a painful legacy. We can never forget those who have died or been injured, and their families.”

Her cousin Lord Louis Mountbatten was killed, along with one of his grandsons, in 1979 when an IRA bomb was detonated on a boat they were sailing on at Mullaghmore, County Donegal. 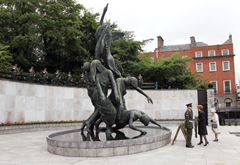 She added: “With the benefit of historical hindsight we can see things which we would wish had been done differently or not at all.”

That dinner was attended by David Cameron, who had met with Enda Kenny earlier that day to discuss trade, economic co-operation between the UK and Ireland, security and the mechanics of coalition governments.

First Minister Peter Robinson also attended the state dinner with his wife Iris and commented to the BBC: “Everyone remembers the past but we have to look to the future.”

The previous day, Queen Elizabeth and President McAleese had laid wreaths in Dublin’s Garden of Remembrance, which commemorates ‘all those who gave their lives in the cause of Irish Freedom.’ The poignant event lacked speeches but contained powerful symbolism. As the Queen of England bowed her head as a mark of respect to members of organisations such as the United Irishmen, the Fenian Brotherhood and the ‘old’ IRA, an Irish military band stuck up ‘God Save the Queen’, followed by ‘The Soldier’s Song’.

A trip to the Guinness brewery began her second day but the Queen and Prince Phillip did not taste the pint poured for them by the master brewer.

The Taoiseach and his wife Fionnuala then met the royal couple in Government Buildings and entertained them in the Taoiseach’s office beneath a portrait of Michael Collins. It was then on to Islandbridge War Memorial Garden where the Queen laid a poppy wreath in memory of the 49,400 Irish soldiers who died in the First World War. The royal couple were then shown the Ginchy Cross, carved out of oak by Irish soldiers who took part in the Battle of the Somme. Members of the Assembly who met the Queen at the event included Peter Robinson, Tom Elliott and Margaret Ritchie. 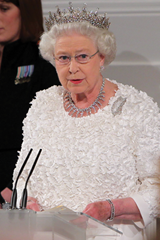 Another ‘first’ was marked when the Queen was met at the entrance to Croke Park GAA stadium by President of the association Christy Cooney. Fourteen people were killed by British forces during a Gaelic football match in Croke Park 91 years ago and, until 2001, the association excluded members of the ‘British occupational forces’ and the former RUC.

A more relaxed itinerary on day three saw the monarch visit the National Stud in Kildare before hosting an evening of entertainment, organised by the UK Embassy, in Dublin’s Convention Centre, where she received a standing ovation from the 2,000 invited guests. On the final day of her visit, she visited the Rock of Cashel and the English Market in Cork.

David Cameron felt that the visit “set the seal on what is already a very strong relationship between [the] two countries, but a relationship I believe that can get even stronger still.”

Northern Ireland Secretary Owen Paterson told the House of Commons the Queen’s visit was “an endorsement of the tremendous progress that has been made and a sign of how we have all moved further on.”

Shadow Northern Ireland Secretary Shaun Woodward said the trip was “extraordinary” and was “as healing as it [was] inspiring.” 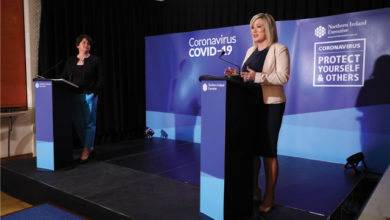 Power sharing in a pandemic 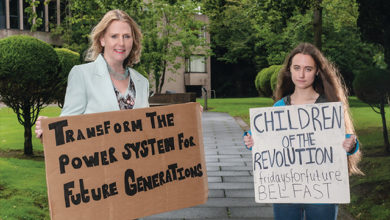 A next generation power system 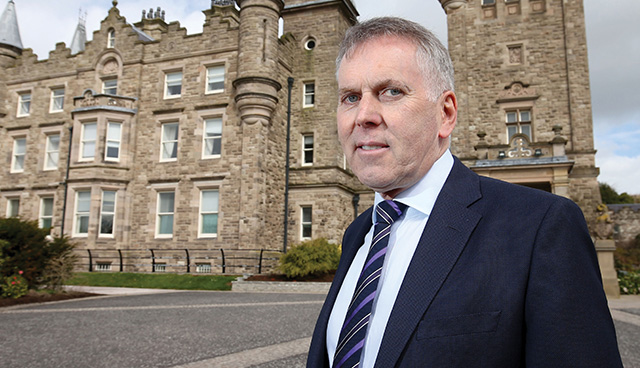 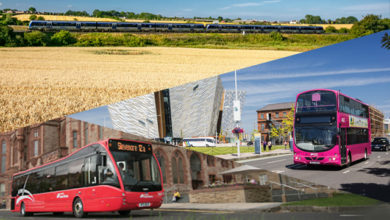 Translink: Putting Northern Ireland on the road to recovery