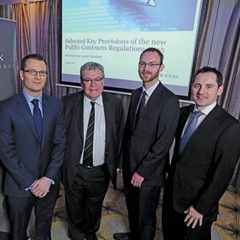 Leading law firm Arthur Cox recently held a seminar on the updated Public Contract Regulations, outlining how they will lead to a more efficient and streamlined approach for contracting authorities.

Over 100 delegates were taken through an introduction and analysis of some of the key provisions of the new set of rules by the Arthur Cox team. The updated Public Contracts Regulations 2015 came into force in February. The objective was to ensure that EU member states can secure high quality goods and services, whilst still delivering value for money.

They also allow for a more straightforward approach to the procurement process, making it faster and less costly for public bodies and private sector suppliers alike. Arthur Cox recently held a seminar in the Merchant Hotel Belfast to outline what these changes mean for both suppliers and public bodies.

Speaking at the event, William Curry, Senior Associate at Arthur Cox, highlighted that the changes are relevant to both those administrating the tender – as well as those applying.

“There are a number of changes which have come into force and will hold huge importance for suppliers,” he remarked. “For one, as a turnover cap has now been established, contracting authorities will no longer be able to ask for a company turnover to be more than twice that of the contract value.

“Public bodies will now also have the flexibility to limit the amount of lots a supplier can win. This ability to break contracts into lots, combined with the turnover cap, will encourage more SME participation. However, it is also important to note that suppliers who have performed poorly on a previous contract can be excluded from future competitions by the contracting authority.” 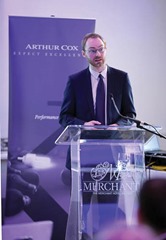 Suppliers need to need to ensure that they’re fully aware of these key changes so that they understand the new rules of the game and can bid successfully.

Delegates were also given an overview about one of the most talked about changes that will apply to public bodies – the introduction of the ‘light touch’ regime that will apply to the procurement of ‘residual’ services such as health, education, sporting and cultural services.

“The regime means that if these contracts are valued at over €750,000, they must now be advertised in the Official Journal of the European Union,” William Curry commented. “Public bodies will also have the freedom to determine the procedures that will be applied to procurement of these services.

“In addition, improved rules mean that social and environmental aspects can be taken into account in certain circumstances when deciding who to award a contract to. Public bodies can now also take into account the experience of individuals at the award stage of the competition.”

While the scope of the 2015 Regulations will be broadly familiar to contracting authorities working with the 2006 Regulations, it’s evident that there are a number of learnings to be understood and applied to any procurement processes going forward. 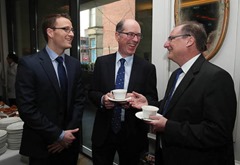 “However, it’s reasonable to assume that these Regulations will take some time to bed in. Interpretation and understanding of certain provisions is likely to evolve over time, not least in light of the various guidance notes from the Cabinet Office and, in due course, case law from the courts.”

The event, which included a comprehensive Q&A session as well as networking opportunities, was attended by representatives from a range of Northern Ireland bodies, including the Central Procurement Directorate, the Department of the Environment and the North Eastern Education and Library Board.

David Torrens, from the Department of Agriculture and Rural Development, who attended the event said: “I found the event useful in clarifying the content and implications of the updated Regulations. The presentation on ‘hot topics’ was also informative and helpful as was the discussion of social clauses.”

John Quinn, from arc21, added: “I found the seminar very useful and informative in regard to the implications of the Public Contracts Regulations, particularly from a Contracting Authority perspective, with a range of experienced speakers and a well-informed audience which facilitated excellent interaction and valuable networking opportunities in the margins.”

Arthur Cox can be contacted as follows: