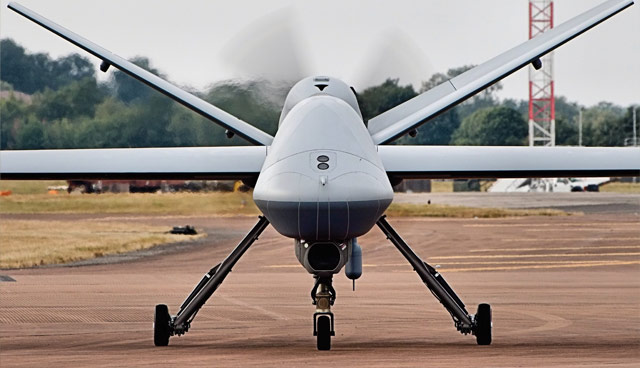 The operational use of drones is “an evolving area of police work”, the benefits of which the PSNI’s Air Support Unit (ASU) has sought to maximise. Ciarán Galway reports on the deployment and limitations of the “diverse and unique” ASU’s most recently acquired aerial asset.

In response to a Freedom of Information request submitted by agendaNi, the PSNI has disclosed several details about its operational use of drones. The aerial asset popularly referred to as a ‘drone’ is synonymous with unmanned aerial vehicle (UAV) and, more commonly, small unmanned aircraft (SUA).

In March 2013, the PSNI informed the Policing Board of its intention to buy drones for deployment during the G8 summit and subsequent policing operations. This proposal was endorsed by the Policing Board and that June, the PSNI purchased three SUA systems, consisting of nine individual SUA. These were:

The PSNI currently own and operate only two SUA systems comprising of three micro craft and three small craft. Since their introduction, there have been no operational accidents involving UAVs.

A May 2015 Review Document of PSNI use of unmanned aerial vehicles indicated that the PSNI Air Support Unit is “the most diverse and unique air support unit operating within the [UK]”. In addition, the operational environment and challenges are “unlike any other air support unit within the [UK], which is primarily due to the threat that exists”.

The ASU operates from a single location at Aldergrove, County Antrim and is capable of deploying several aerial platforms. Its role is to assist in the management of public disorder, crime hotspots, reports of dangerous driving and terrorist incidents. The unit also works to pro-actively support district policing and is regularly tasked to search for missing vulnerable persons.

In 2013, for instance, the ASI received 4,067 taskings, of which 260 could not be accepted due to higher priority taskings, unavailability of aircraft due to maintenance and prevailing weather conditions. As such, SUA were regarded as being “vital in mitigating and minimising gaps in the capability and effectiveness in the provision of air support”.

However, the 2015 Review indicated while the PSNI was confident of further improvement, a residual gap remained. There were a number of operational factors which hindered SUA deployment opportunities, including:

However, in response to agendaNi, the PSNI asserted that on 36 occasions, adverse weather conditions inhibited the use of an SUA where its deployment was deemed necessary and “no other factors have been recorded”.

In November 2017, HM Inspectorate of Constabulary and Fire and Rescue Services (HMICFRS) published Planes, drones and helicopters: An independent study of police air support. In undertaking its research, HMICFRS visited the PSNI ASU and found that “the type of aircraft used was determined by the requirements of the task at hand, with response policing needs generally being met through the use of helicopters”.

As of March 2018, the PSNI has completed a total 358 overt operational deployments of SUA since the programme was initiated in June 2013. The initial nine flights (operational use) undertaken by PSNI SUA were a component of the policing operation undertaken during the 39th G8 summit which was held at the Lough Erne Resort in County Fermanagh (G district). Excluding the G8 deployments, operational categories from most to least frequent were as follows:

In mid-2017, the PSNI revealed that SUA were being used to “help prevent and combat wildlife crime” by monitoring ‘hot-spot’ areas in which crimes were being committed against birds of prey. It detailed that these SUA were fitted with “specialist cameras” to assist in the prevention and potential apprehension of perpetrators. Deployments of SUA for ‘wildlife operation’ occurred exclusively in K District.

In addition to this, the PSNI provided agendaNi with a breakdown of SUA flights by geographic (policing district) location. The most operational deployments took place in Belfast, while the least occurred in Derry City and Strabane. Operations across the policing districts, from highest to lowest frequency, were distributed as follows:

Interestingly, after raising concerns that “information relating to a number of technical and safety issues regarding SUA appears to have been withheld from the [Performance] Committee”, a subsequent report to the Policing Board indicated that between 01 January and 30 June 2015, SUA had not been deployed for “technical and operational reasons”.

Minutes from a January 2016 meeting of the Performance Committee note: “PSNI explained that this was new and emerging technology and there was a continual requirement to manage ongoing issues with all types of aircraft.” However, according to the data released to agendaNi, three SUA flights did transpire during this period. In February 2015, SUA were deployed to support district policing in D District and twice again in June, firstly, to support traffic management in A District and secondly, to help locate a missing person in L District.

The PSNI confirmed that “a substantial amount of time” was invested in the training of SUA operators (of which there were originally 11) and the police force has an obligation to satisfy the Civil Aviation Authority (CAA) that SUA are deployed proficiently. The PSNI regularly liaised with the CAA which has also had oversight of SUA operations.

Deployment of SUA have provided ‘top cover’ at crime scenes, high risk search operations and in the resolution of security alerts. The downlink provided to police commanders is conducive to situational awareness and provision of a general overview of surrounding areas. While a conventional police aircraft may cost in excess of £1,000 per hour to operate, there is no hourly cost in operating an SUA (excluding crew or operator costs).

The PSNI’s aerial platforms are not deployed as a matter of routine patrolling. Prior to deployment, the ASU assesses each request for aerial support to ensure firstly, that such support is “achievable and proportionate” and secondly, to ensure that the most effective and efficient platform is deployed, whether that be plane, helicopter or SUA.

Since the introduction of SUA, the ASU has “been able to increase [its] capability and capacity by providing an enhanced, flexible, tactical response in the provision of air support in a more effective and efficient manner”. As a result, the cost of protracted policing operations can be minimised, alongside the risk to police officers and the impact on local communities.

During SUA deployment, from launch to recovery, images and recordings are downlinked in an encrypted format to the hard drive of the laptop used to control the asset. Recordings are then stored in the hard drive before being transferred by compact flash drive to a “Home Office approved device” which subsequently produces an evidential disc. This disc is then marked and exhibited. Retention or disposal is dictated by the Management of Police Information (MoPI). Material which is obtained by request for deployment and required for a specific police purpose must be retained for a minimum of 10 years (as per the PSNI’s Review, Retention and Disposal Schedule). All other material which is not required for a specific police purpose (to assist investigations) should be reviewed and destroyed after 28 days.

The 2015 Review concluded that the SUA programme has increased the PSNI’s effectiveness by reducing the gap between need and capacity, its efficiency during protracted police operations and its legitimacy in reducing impact on communities, in line with the policing with the community strategy.

Partial ‘neither confirm nor deny’

Under Section 23 (5) (information supplied by, or concerning, certain security bodies), Section 24 (2) (national security) and Section 31 (3) (law enforcement), the PSNI neither confirms nor denies that it holds any further information relevant to the covert
use of UAVs.

The PSNI acknowledges: “There is a public interest in the transparency of policing operations and providing assurance that the police service is appropriately and effectively engaging with the threat posed by various groups or individuals.”

However, on a test of balance, it declares: “There is a very strong public interest in safeguarding the integrity of police investigations and operations in the highly sensitive areas such as extremism, crime prevention, public disorder and terrorism prevention…

“These areas of police interest are sensitive issues that reveal local intelligence. Therefore, it is our opinion that for these issues, the balancing test for confirming or denying whether any other information is held regarding UAVs, is not met.”

Under this partial NCND, the PSNI asserts: “Confirming or denying that any other information is held regarding the covert use of this specialist equipment would show criminals what the capacity, technical abilities and capabilities of the Service are… Confirming or denying the specific circumstances in which the police service may or may not deploy UAVs covertly, would lead to an increase of harm to covert investigations and compromise law enforcement.”

Likewise, it suggests: “Confirming or denying that any other information is held in relation to covert use around UAVs would limit operational capabilities as criminals/terrorists would gain a greater understanding of the police’s methods and techniques, enabling them to take steps to counter them.”

Recommendation eight of the Northern Ireland Policing Board’s Human Rights Annual Report 2015 required the PSNI to submit a written report to the Performance Committee twice yearly detailing the nature and extent (type and frequency) of SUA deployments. The PSNI accepted this recommendation and made its first report to the Committee in September 2016. However, following the collapse of the Executive, the Performance Committee has not met since November 2016. As such, the twice-yearly report cannot be scrutinised.