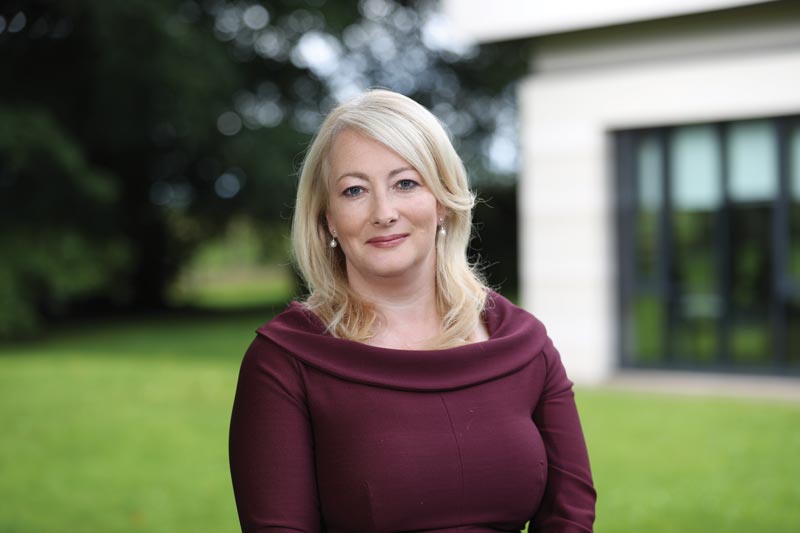 Rosemary Steen, External Affairs Director at SONI (EirGrid Group), talks to agendaNi about the System Operator’s role in growing the Northern Ireland economy and the women who are making it happen.

“We should always be thinking about people,” says Steen, straight out of the blocks, her energy tangible. “What we do and how we do it impacts everyone in Northern Ireland. People need a secure, safe and reliable electricity supply to run their businesses and to power the economy; people deserve an efficient all-island electricity market to provide a cost-effective supply; people should know who SONI are and that we work every day to bring them these benefits.”

Steen, is the Director of External Affairs across the EirGrid Group, which includes SONI (System Operator for Northern Ireland) and its sister company EirGrid in the Republic.

From its control centre in east Belfast, SONI manages the flow of power on the transmission grid throughout Northern Ireland. SONI also develops the high-voltage grid, strengthening it as needed and providing new connections.

Each branch of SONI’s work overlaps with Steen’s areas of responsibility which include connections and charging, customer relations, and regulation.

Another key area under Steen’s remit is directing SONI’s Public Engagement strategy, which includes working with the business community and other stakeholders to build support for grid development projects: “SONI is on a journey, in 2014 we took on responsibility for obtaining planning permission for grid projects, not least the North South Interconnector, which remains SONI’s priority project.”

For Steen, who has previously held senior positions in Shell and Vodafone, delivering infrastructure while often challenging, is familiar territory: “Public acceptability goes hand-in-hand with delivery of infrastructure,” she says with an unwavering clarity. “To achieve this people need to know who we are and what we do, which we are working on. Ultimately I hope that we’ll get to a point where people know SONI and trust us.” 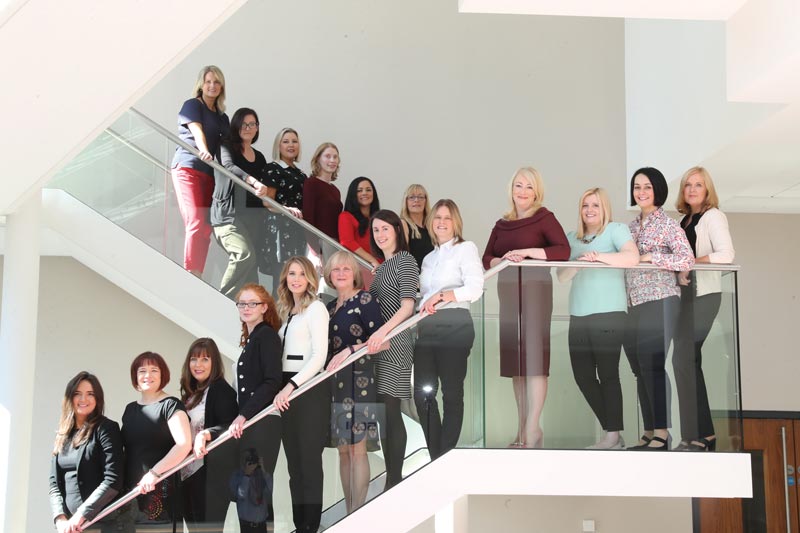 “The North South Interconnector means a strong, stable grid and that really is the back bone of the economy.”

The North South Interconnector is a proposed 400 kV overhead line which will connect the grids in Northern Ireland and the Republic, it will ensure that Northern Ireland has a secure supply of electricity, which currently faces a critical shortfall post 2020. The interconnector will also allow the all-island Single Electricity Market (SEM) to function efficiently, resulting in downward pressure on prices.

This year the project reached a key milestone as Steen explains: “In February the Planning Appeals Commission (PAC) held a Public Inquiry into the planning applications for the project. We had a huge amount of support from the business community, including a delegation with representatives from, Northern Ireland Chamber, CBI, FSB, Retail NI, IoD and the Centre for Competitiveness. Each of these business organisations not only understands the critical need in terms of security of supply, but also the wider benefits the project will bring, in terms of supporting indigenous expansion and attracting inward investment, and reducing costs and so it was very positive that they appeared at the hearing.

“We understand that the PAC is now reviewing the evidence and we expect a recommendation to the Infrastructure Minister sometime in Autumn (2017) and would hope for a ministerial decision soon after, to allow the build of this vital infrastructure to progress.” 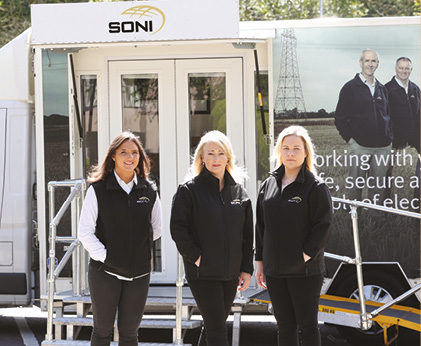 “It is the people who are important and we are putting them at the heart of this strategy.”

In the meantime, Steen is working with her Public Affairs team at SONI, led by former BBC reporter Natasha Sayee, to ensure that the project is understood at a political level, and within the community as Steen explains: “Meaningful engagement is what we are about and so we’ve opened a permanent office in Armagh for anyone with questions about the project to drop in and discuss.

“We’ve our landowner engagement team and mobile information centre on the ground, at agricultural and sports events within the proposed route area. We’ve an Agricultural Liaison Officer to engage directly with people impacted by the project. We’ve advertising, information booklets and webfilms developed to provide information about the project in plain English.

“We aim to be accessible, clear and at the end of the day we want a politician, a journalist, a homeowner or a farmer to be able to call with us, have a cup of tea and discuss their concerns and we will do our best to help them. It is the people who are important and we are putting them at the heart of this strategy.”

Steen’s role as Director of Connections across the EirGrid Group means providing a service for some of world’s best known tech companies, who have been swarming to the greater Dublin area to benefit from the robust grid. Steen hopes that by strengthening the Northern Ireland grid these household names will also seek to set up north of the border: “The North South Interconnector means a strong, stable grid and that really is the back bone of the economy. We need it for a secure supply to facilitate growth of Northern Ireland businesses, but it will also rubber stamp the quality of NI PLC’s electricity.

“I see it in my role in the South, dealing with several of the large US data firms – they want to ‘plug-in’ where the grid is strongest, they want a reliable supply and more often than not they want to be powered by renewable energy. The North South Interconnector will mean that Northern Ireland’s electricity grid can facilitate these types of large energy users. It will put Northern Ireland in that competitive space and will be both rewarding and exciting to watch the Northern Ireland economy bloom in that way.”

Steen is joined at the EirGrid Group Executive table by Siobhan Toale, Director of Human Resource and Corporate Services; and throughout SONI, women are at the helm.

Steen is clear that while it is about getting the best person for the job, women bring great strength and diversity to the energy industry: “Infrastructure, economy and energy are my background, but they are also traditionally male industries and it has been challenging, but here I am. I do make an effort to mentor women in the energy industry both in and outside of the office, to bring them through with me.

“My two tips for women in energy or indeed any traditionally male environment are; be confident – trust in your own experience and your own skills. Contribute. Contribute! We do ourselves a huge disservice when we remain silent because then we become invisible. My second pointer is to stand with other likeminded women; find a network, share learnings and help each other to develop. It is a long way to the glass ceiling, but we can and we will get there together.”

Whether it is keeping the lights on or the money flowing through the all island market, SONI’s women are at the fore.

Eimear has been with SONI for five years and leads the outage planning section for the Near Time Department, which is also responsible for Grid Code compliance and is a direct support to the Control Centre staff who keep the lights on across Northern Ireland. With a Masters in Electrical and Electronic Engineering and a background in the oil and gas industry and new generation connections, Eimear says: “I really enjoy my job, there are always technical challenges to overcome and I think female engineers are particularly determined. I see it in myself and other colleagues, we won’t give up until we’ve found solutions and getting to that point is very rewarding.”

Sarah, a Chartered Engineer, is SONI’s lead on Regulatory Affairs: “It is the wide scope which makes the job so interesting,” she explains. “I’m involved in I-SEM design and implementation, license compliance, policy development, really the full range of business functions because everything SONI does is subject to regulation in one way or another.” Sarah previously worked as a Consulting Engineer and in brewing: “To me the electricity industry feels more ‘equal’ in terms of gender than in other industry, it certainly is nice working with so many women, rather than being the only one.”

In her role as Legal Counsel, Leigh provides an in-house service for a range of legal matters, protecting the company against risk and ensuring that SONI operates in accordance with legal requirements. With a background in energy law, Leigh describes her role as: “Challenging and diverse, working in-house provides me with a depth of understanding about the business which allows me to provide tailored legal advice. Every day is different. You don’t have to be a scientist to work in STEM; the industry offers many opportunities for legal professionals too.”

Responsible for SONI’s external communications and public affairs strategy, Natasha, a former television news correspondent, utilises her contacts and her professional communication skills to support business objectives, with a primary focus on the North South Interconnector. Natasha encourages reporters and communications specialists to take a step into energy: “The industry is fast-paced, flexibility and agility are essential, these are core skills for journalists and I am enjoying the challenge of navigating the industry at a time of rapid change.”

Lynne joined SONI as a Financial Analyst in 2009 and was appointed Financial Controller in 2013. Lynne is responsible for the financial management of the business, which involves close working with all departments. Lynne describes her role as: “Interesting, not only do you have to have a sharp eye for the figures, but you also need to have another eye on what is happening within the business and across the broader industry. They say women are superior multi-taskers, it is a skill I’ve certainly finessed within finance in the energy sector.”