The SDLP’s Sinead McLaughlin was selected in January 2020 as MLA for Foyle following the election of party leader Colum Eastwood to Westminster. The former Chief Executive of the Chamber of Commerce in Derry has taken up the role as Deputy Chair of the Committee for the Economy. McLaughlin was a key figure in the Remain campaign in Northern Ireland prior to the Brexit referendum.

What has been your career to date?
I have had an extensive career, predominately, but not only, within the private sector. I have also worked in the NHS, the social economy sector and the emergency services. Before going into politics, I spent eight years as Chief Executive of the Londonderry Chamber of Commerce.

What inspired you to get into politics?
While working as the CEO of the Londonderry Chamber I was engaged in various city and region development plans and also in the campaign to grow and develop our higher education provision. That is essential to support the economic development of the North West region. When the UK Government called a referendum on UK membership of the EU, I was acutely aware that the decision to leave would have a disproportionately detrimental impact on the business community, economy and workforce in Northern Ireland. It would have particular economic and social impact on the border region in the North West. I became heavily involved in the remain campaign in Northern Ireland.

So in many ways, I became involved in political activism as a result of Brexit. But as CEO of the Chamber of Commerce, I became frustrated with political inaction at the level of the Executive and ministers. In particular, I was angry at the lack of delivery for Derry. I feel passionately that more should be invested in our region, we needed better roads and rail connections, a full-sized university in the North West and a better system of skills training that meets the needs of employers and employees.

What are your key priorities for your constituency?
I want to be at the heart of the decisions where I can make a difference, making this a better place to live for everyone. Derry has an unacceptably high level of unemployment and also the hidden unemployment of economic inactivity. We have to put that right, despite it having been a problem for decades. The solutions to that include better infrastructure, including road, rail, broadband, electricity grid and water supply, they are all factors that drive commercial investment decisions. But above all, we need to get the skills base in the local labour market improved. We hear lots of praise for the grammar schools that provide the entry to university education, which is great for those who benefit, though many of those leave and never come back. But we need to give much more attention to the lives of those pupils who leave school without basic skills and struggle after that to have good jobs and decent wages. 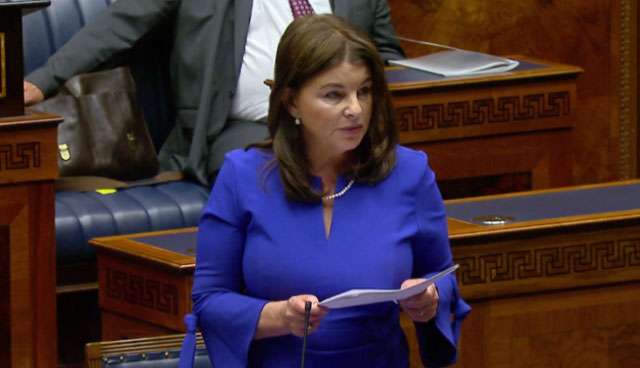 “I have been a critical friend to the party for many years and when I decided to pursue a political career it was my natural home.”

Who do you admire in politics or public life?
Global politics at the moment is toxic. I am horrified at the leadership of the United States and the UK’s hands-off response. The failures of the leaders in both countries to deal properly with the coronavirus says it all. But there are politicians I admire. Jacinda Ardern, the New Zealand Prime Minister, is a breath of fresh air. I take my hat off to Angela Merkel, she is always the smartest person in the room. The current Tánaiste, Simon Coveney, has played a leading role in protecting the Good Friday Agreement and was instrumental in supporting the re-establishment of the Assembly. Closer to home I admire Claire Sugden, Rachel Woods and Naomi Long. And what can I say about our own Nichola Mallon, she is smart, genuine, honest and hardworking. I have no idea how she does the job she does and also be a hands-on mum to three small children.

What drew you to the SDLP?
I am a social democrat and very much centre left. The SDLP has been my political home most of my adult life. I have been a critical friend to the party for many years and when I decided to pursue a political career it was my natural home. Brexit and Covid-19 are two terrible disasters that have been mishandled by the British Government. It is a time to look at the island of Ireland and start building a new union that is home to all.

What are your interests outside work?
I am a reader. It is my escape. I also like walking and during lockdown, like many others, I got back on my bike. To be honest, political life is very unhealthy. There are lots of early starts, travelling for over three hours per day, plus hours sitting in the Assembly. It is very difficult to get time to exercise, or to eat at regular times, so now my priority is to get at least some exercise every day. My passion and love in life is my hubby Peter: he has been my rock and our two daughters, Aoife (27) and Clare (25), are two self-reliant, socially aware adults and I am proud of them.