Former news broadcaster Mike Nesbitt is the MLA for Strangford, having previously served as the leader of the Ulster Unionist Party.

Outline your background/career to date

I was born just in time to grow up through what we so euphemistically called ‘our Troubles’. I have a MA from Cambridge and a MBA from Queen’s University Belfast. I was a broadcast journalist at BBC NI for 10 years (sport, then presenter of Good Morning Ulster), before becoming Managing Director of Anderson Kenny Public Relations. After that, I returned to broadcasting with Ulster Television, before becoming a Commissioner for the Victims and Survivors of our Troubles.

I stood for election to the Northern Ireland Assembly in 2011, representing Strangford. In 2012, I began a five-year stint as leader of the Ulster Unionist Party. Currently, I represent the party on the Policing Board of Northern Ireland and Stormont’s Ad Hoc Committee on a Bill of Rights.

It’s complicated. On 25 January 1973, the IRA blew up my family’s linen business. My father was 49 years-old and in that instant every certainty in his life disappeared, while every responsibility remained (wife, children, car, house). It’s what first got a young me interested in the human cost of conflict.

My days as a news broadcaster saw me cover many of the major atrocities of the Troubles (Enniskillen to Omagh) and the landmark political developments (Anglo-Irish to Belfast/Good Friday Agreements). Of all that body of work, what I think most worthwhile was giving a voice to victims and survivors.

Locally, I was inspired by two members from both the Ulster Unionist and Social Democratic and Labour parties. Harold McCusker of the UUP made one the greatest Westminster speeches of the modern era in opposition to the 1985 Anglo-Irish Agreement. David Trimble was the ultimate example of both (i) taking risks for peace in supporting the Belfast/Good Friday Agreement and (ii) living our party credo of “country first, party second, individual third”.

For the SDLP, John Hume also lived that credo, addressing the borders in people’s minds and promoting the fundamental importance of relationships to political progress. Seamus Mallon was a favourite interviewee, because he was sparky and formidable, but also because he understood the need to embrace his unionist brothers and sisters to make everyone comfortable in our “shared homeplace” 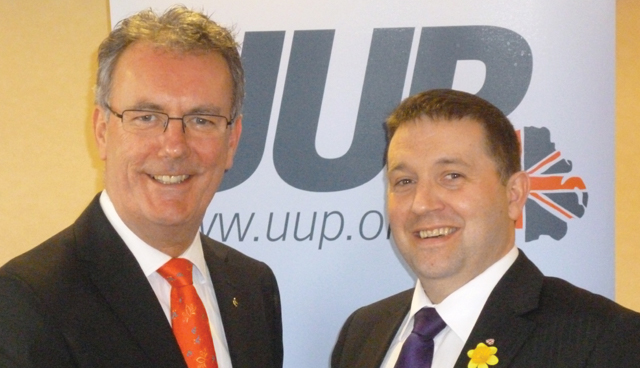 I could not countenance the DUP, a party
I regarded as reactionary, fundamentalist and created as a party of opposition. Opposition is easy when you do not have practical alternatives.

What drew you to UUP?

I was brought up in a pro-union environment, but as a broadcast journalist, felt I had to understand the position of others, not least Irish nationalists and republicans. Those studies and reflections led me to believe the union of the United Kingdom was the best constitutional framework to deliver a fair, equitable, peaceful Northern Ireland, with a focus on the prosperity of all our people.

I could not countenance the DUP, a party I regarded as reactionary, fundamentalist and created as a party of opposition. Opposition is easy when you do not have practical alternatives.

I have many priorities for the Strangford constituency. I believe the Ards Peninsula is perfect as a destination to be promoted by Tourism NI; it has natural and built heritage (think only of the Lough and Mount Stewart and its gardens). Additionally, our agri-food is world class. We need to encourage further inward investment in other sectors; not least hospitality, already critical within the council area.

I chair the board of Movilla High School, Newtownards’ the only non-selective post-primary school and have led a successful five-year campaign against closure. Education and the economy are the two priorities in building better.

I am a member of the Ards Suicide Awareness Group, working to promote better mental health. I also serve on the Ards Peninsula Coastal Erosion Group, an amalgamation of public, private and community sector groups taking a longer-term view of our responsibility to preserve our environment for future generations.

At my age, staying alive is an interest. I like walking and talking with family and friends. Golf is the sport I play, rugby the game I watch. I like reading. I am also working on my autobiography/memoirs, but find it very unhealthy. “Me, me, me” is not where anyone should be focused! As a student, working as a binman for Ards Council, a great man called Benny Campbell called me to order anytime I boasted with the admonition “Self praise? No recommendation!” If I ever finish it, that will be the title of my book.