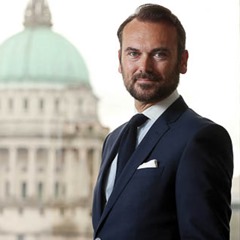 Danske Bank UK Chief Executive Gerry Mallon talks to Owen McQuade about the bank’s 2014 record profit and the challenges in the personal and business banking sectors.

2014 was a “great year” for Danske Bank UK in terms of the bottom line, with it posting its largest profit to date – £117.5 million. Although the headline profit was a record for the bank that was previously known as Northern Bank and has been operating in Northern Ireland for over 200 years, there were a number of large exceptional items.

“The negative exceptionals that have been seen across the industry over the last few years, are now exceptional positives,” Gerry Mallon observes.

“If you strip out the exceptional items, our underlying profit was £80 million and is still at one of our best ever levels.”

A number of trends are driving Danske Bank’s profit. The impairment adjustment demonstrates that there has been some degree of recovery in the local property market: “Some of the companies we had provided for are now trading their way out of their difficulties and we no longer need to hold a provision for bad debt against them. That is property that is being disposed of and is being sold at a value that is higher than at which we are carrying it.”

Mallon runs through the fundamentals of the business. Lending and deposit volumes are relatively strong. On the lending volumes, there was a noteable amount of growth on the mortgage side and a steady performance on the business lending side.

“We have worked very hard to grow our business lending book with new customers, although a large part of our existing core customer base continues to amortise its debt and to deleverage,” he remarks. “We do not see the demand for new lending coming through as strongly as we would like.”

In Northern Ireland, Danske Bank has seen its market share of the Top 200 companies grow from 21 per cent in 2007 to 46 per cent in 2014. “We still want to continue to grow in this sector. However, it is inevitable that the number of prospective customers in it become more limited as our market share grows,” Mallon surmises. “A real focus for us now is the long tail of SMEs who have deleveraged over the course of the crisis and have not yet got back to reinvesting in their businesses. I can only put that down to a lack of confidence given the amount of uncertainty there is out there.” In particular, he points to uncertainties regarding the euro zone, public sector finances in Northern Ireland and the impact on the economy, and the approaching general election – all of which tend to make businesses defer investment decisions. 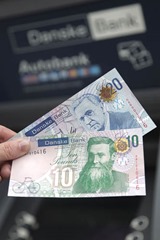 Danske Bank has been “pushing hard” to grow its lending book but “there is still a myth out there” about banks not lending or being prepared to lend as they are too constrained. Rebutting that perception, Mallon contends: “We are heavy on capital and liquidity and we have the money. We not only have the desire to lend but the need to lend because that money sitting on our balance sheet is not productive for us unless we can lend it. Our overall operating profitability was driven by the fact that we made more income from the funding side and implemented tighter cost control across all of our operations.”

2014 was a busy year for Mallon and included a couple of appearances before Westminster’s Northern Ireland Affairs Committee, one as a member of the Executive’s Economic Advisory Group (EAG) and another appearance with his Danske Bank hat on.

“It was an interesting experience and we were keen to engage with the committee and explain the challenges facing banking at the moment,” he comments.

“In many ways, it felt that some of the issues would have been more relevant 18 months or two years ago as a lot of the issues have been resolved or overtaken by events since then.”

The challenge of lending support for SMEs had “largely passed” by the time it was raised by the committee. Mallon also points to the EAG’s definitive policy and research work on access to finance which concluded that it was “more of a demand issue that one of supply” but societal perception did not reflect what was the economic reality.

There are different competitor sets for the business and personal banking sides of the business. On the personal banking side, there is intense competition from players based in Great Britain such as Halifax, Nationwide and Santander which are traditionally strong in the mortgage market. “There are also a number of banks out there which I believe have loss-leading products in the current account market,” he comments. “The personal banking sector is changing with an increased emphasis on technology with online and mobile banking rather than a traditional bank network.”

Although Mallon sees Danske as having a strong competitive advantage in technology, he highlighted: “Looking beyond the short term, on a five-ten year horizon, you could see technology allowing new entrants easy passage to the sector and picking up niches in the banking value chain. That could be Apple Pay in payment systems, in savings products or other new business entrants which are yet to emerge.”

He also senses an onus on banks to reinvent themselves, to think about what services they provide, and understand the services which customers really want and what they will want into the future. “There is also a trust challenge since the economic crisis that has dented consumers’ belief in banks, which can only aid such new entrants,” he adds. “On the business banking side, while there have been new entrants the strong competition remains amongst the ‘big four’ (Bank of Ireland, Danske Bank, First Trust and Ulster Bank).”

“We have made great strides in recent years and have invested heavily in rejuvenating this part of the business and improving our product offering,” says Mallon. “We started getting traction in 2006 and I felt we held our nerve through the crisis in terms of still being out there actively looking to win new business.”

Danske Bank also has the advantage of “a strong local team at every level” from finance centres across Northern Ireland to the corporate finance team based in Belfast and the local executive team: “Within our executive leadership team, we are not having to report individually to London or Dublin and have the decision-makers on the ground here in Belfast.” 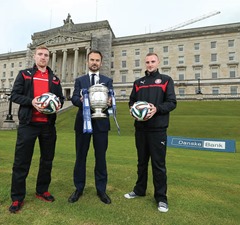 It is difficult for any retail bank with a mature market position to grow more than the economy in which it is situated. Consequently, banks are a good bellwether of an overall economy.

“I feel strongly that we should focus on supporting local businesses who want to grow,” Mallon states. “I would like to see more confidence amongst the local business community. While euro zone uncertainty is still an issue, that market has come through more serious crises and overall the UK and Ireland’s confidence and economic development are on a positive trajectory. He therefore sees a lot of reasons to be optimistic going forward.

“Banking is going to be a cost control game going forward with a continuing investment in technology and customer service,” Mallon comments in conclusion. “We have significantly reduced the cost base of our branch network over the last seven years and we will see some stability in that part of the business over the next couple of years. The future focus will be on technology and innovation on the delivery side, where we have already attained a strong competitive advantage.”

Gerry Mallon has been Chief Executive of Danske Bank UK since 2008. A native of Belfast, he attended Rathmore Grammar School in the city before studying at Cambridge University, initially choosing engineering then switching to economics, gaining a first class honours degree. He then returned to Northern Ireland to study for an MBA at Ulster University and entered the Northern Ireland Civil Service’s Fast Stream Programme.

Gerry then worked for strategy consultants McKinsey & Company in London for nearly five years and then joined Bank of Ireland in Belfast. He joined Northern Bank in 2006 and took up his current role just weeks before the collapse of Lehman Brothers: “The first four years went by in a blur but we all learned a lot in a short period of time from the crisis.”

As well as being a member of the Economic Advisory Group, he has been on the council of Ulster University for nearly 12 years, chairing it for the last five years. He has recently joined the Irish Football Association board “who have sorted a lot of the governance issues out but there are still some external perceptions that it doesn’t deserve.” Interests outside work revolve around his family and four children. An avid Liverpool fan, he says he doesn’t get to see them play as much as he would like to.