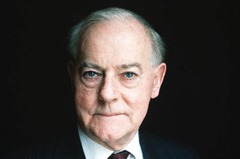 Among the quietest men in the public eye, James Molyneaux lived a full and long life. A strong commitment to public service was a common thread throughout his career in politics and one which was deeply shaped by his wartime service.

A farmer’s son from Killead, he would in later life recall finishing his homework and walking down the road to watch the planes at nearby RAF Aldergrove. He joined the Royal Air Force in 1941 and, at the age of 24, was among the British and Canadian troops who liberated Bergen-Belsen concentration camp.

His experience of seeing the consequences of evil and helping to bring freedom left a profound impact. “You would never write people off as being non-entities and I think you have to place a certain amount of importance to every human being,” he said in 2001, after keeping his counsel for many years. It contributed to his lasting interest in care for disabled children and people experiencing poor mental health.

Molyneaux subsequently served as an Ulster Unionist member of Antrim County Council and an aide to South Antrim’s MP, Sir Samuel Knox Cunningham. He was fascinated by Parliament and his election to the Commons in 1970 was a natural next step.

In his maiden speech, on the security situation, he acknowledged that his predecessor “could have opened this debate with far more skill and greater eloquence, and, may I say, with a heavier punch.” Molyneaux ventured to “set the level of this debate above that of charge and counter-charge at this critical time in our history.”

He came to greater prominence in 1974 when the first Assembly fell and direct rule returned. By that stage, he had also become Sovereign Grand Master of the Royal Black Institution and his grassroots support delivered the party leadership to him in 1979. He was returned for the new constituency of Lagan Valley in the same year.

The Troubles were, by then, in full force with no political solution in sight. Molyneaux saw deeper integration with Britain as the answer and was a reluctant participant in the 1982-1986 Assembly. The Anglo-Irish Agreement took the UUP and its leader by surprise. After briefly protesting alongside Ian Paisley, Molyneaux returned to a calmer, diplomatic tack. He welcomed the 1993 Downing Street Declaration which set up the three-stranded approach to the peace process. At home, there was a sense that the party was lagging under his leadership. A surprise challenge in March 1995 led to his resignation in August of that year.

As a backbencher once again, Molyneaux was critical of David Trimble and close to Jeffrey Donaldson who succeeded him as MP in 1997. He last voted in the Lords in 2008 and retired to Killead where he was a member of the church choir and select vestry until recent years. James Molyneaux was unmarried and is survived by his sister-in-law, Agnes, and his wider family circle.