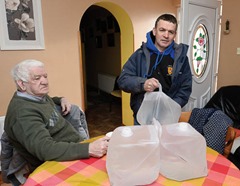 After weeks of negotiations and industrial action which at its worst point saw around 9,000 homes throughout Northern Ireland without running water, it appears that a deal has finally been reached between NI Water and its staff on 21 January.

Union representatives had been involved in a series of intense talks with management, in a dispute over the future of the company’s pension scheme. More than 1,000 workers from NI Water had been working to rule from 22 December after a decision was taken to change the current pension scheme. The GMB stated that this move would force staff into working for “more years not less” and cost them up to £100 per month.

No exact details have been announced in terms of what deal has been struck. NI Water Chief Executive Sara Venning stated: “This is welcome news and my continued focus is now on working with our staff to restore services to all our customers.”

In a statement, the Water Group of Trade Unions (WGTU) said that it was “satisfied that sufficient progress has been made to allow us to consult with our members on the offer tabled by Northern Ireland Water.” The work-to-rule action resulted in disruptions during severe weather conditions. NI Water and the unions have issued assurances that any remaining customers who have been affected will be their main priority.