Peter Cheney about its performance as a small economy and the impact of its agricultural reforms. The country is also preparing to mark its own First World War centenaries.

As a small developed economy, New Zealand is keen to build its links with the UK and also promote itself as a base for companies keen to expand into the Asia-Pacific region.

Speaking to agendaNi at the Conservative Party conference, the country’s High Commissioner, Sir Lockwood Smith, says that it is a dynamic and outward-looking nation “because we have to compete with Asia.”

Lockwood Smith was appointed as New Zealand’s High Commissioner to the UK in March after five years as Speaker of the House of Representatives. During his earlier political career, he held the education, agriculture and trade portfolios.

It is a “real privilege” to represent his country in “one of the world’s great cities and so it is an exciting place to be.” New Zealand’s institutions evolved from Westminster and the heritage of both countries is closely linked.

“I really want to focus on building the relationship between New Zealand and the UK to an even higher and closer level,” Smith remarks.

Looking to the future, he will encourage New Zealand businesses to think about the UK as a good base for international operations. Access to the EU is a key selling point and Britain is “uniquely placed” for doing business in the northern hemisphere. “Sophisticated services and hi-tech products” should be the mainstay of this economic relationship as much of the country’s commodity trade is now with Asia. Most of the yachts in the recent Americas Cup were built in New Zealand.

He accepts the perception that New Zealand is “very Asia-focused” but wants people to understand that the country is “globally focused”. Smith points out that “the EU is after all the biggest hunk of the global economy still” and New Zealand wants to see progress on the trans-Atlantic free trade agreement.

“At the moment, we’re just working on a framework agreement [with the EU] which has got no trade components but we dearly want to see that become a free trade agreement,” Smith notes.

The post also involves being Ambassador to the Republic of Ireland. “I’ve never been across the sea to Ireland,” he quips. “I’ve sung so many songs about Ireland.” The island is “such a musical place and dancing and music is such a part of Irish culture that’s influenced New Zealand hugely.” One of his prime ministers, Jim Bolger, was the son of immigrants from County Wexford. 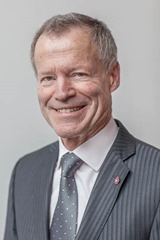 The country’s relatively small population (4.4 million) is outweighed by its strong performance in agricultural exports: equivalent to £13.1 billion in 2011. Its agricultural sector, unlike that in Europe and other developed countries, is entirely free of subsidies.

New Zealand, Smith relates, went down a “protectionist subsidised path” after Britain joined the EEC in 1973 but government subsidies were abolished in 1985.

Productivity growth in the sheep sector has dramatically increased. In the early 1980s, New Zealand had 70 million sheep. The number of sheep has since halved but the country exports “just as much meat.”

It is put to him that moving from small to large farms would have caused considerable disruption in rural areas. Smith responds: “It’s caused evolution. I mean things change but things have to change because we live in a changing world.”

He owns a beef farm on North Island and is from Matakohe, a small town which is now a major centre for tourism.

“Certainly, farms have got bigger – no question about that – but that had to happen,” he adds. “The cost of trying to keep things the same is huge.

“If you tried to keep the car industry the same as it was in 1970, you wouldn’t have an industry here.” To cite another success story, New Zealand wine is now the country’s third largest export to Australia and commands the highest average price in London: “Once you get rid of protectionism and subsidisation, and industries can focus on the marketplace, they start to blossom.”

The First World War centenary commemorations will be a significant priority for New Zealand over the coming years. In the darkest day in its history, 845 young soldiers died at the Battle of Passchendaele on 12 October 1917.

“We share that fight for the values we hold dearly,” Lockwood Smith comments. “We want to use those commemorations again to build for the future. It’s not all a case of just looking back.”

The war had a profound impact on such a small country and touched nearly every family. Out of a population of one million, 103,000 New Zealanders served overseas. Around 18,500 died and another 41,000 were wounded.

While the New Zealand contribution at the Gallipoli landings, in Turkey, is best known, the largest number of fatalities (12,500) occurred on the Western Front and the New Zealand Government is keen that this sacrifice receives more attention. The centenary website is: ww100.govt.nz