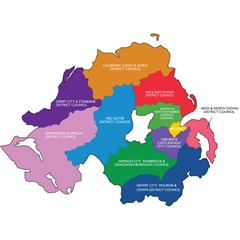 Peter Cheney looks back on the story of local government so far and the way ahead for Northern Ireland’s 11 new councils.

Almost 42 years after the last reorganisation of Northern Ireland’s local government system, the region’s 11 new councils took shape on 1 April. The move will have a major influence on how local public services are delivered over the next generation.

The history of local government can be traced back to the grand juries – committees of landlords and other notable figures which administered the traditional counties. Municipal corporations were formed in 1840 to cater for the needs of the growing towns and the grand juries were effectively replaced (as local authorities) by county councils under the 1898 Local Government Act.

Each county was sub-divided into urban and rural districts with Belfast and Derry becoming county boroughs (run by corporations). The system was inherited by Northern Ireland at partition.

Pressure for change came from the civil rights movement in the late 1960s. Housing allocation was transferred to the Northern Ireland Housing Executive in 1971 and the Macrory report envisaged a three-tier system of government with strategic decisions taken at Stormont, sub-regional boards for health and education services, and a range of other services delivered by 26 new local authorities.

The first elections to the new councils took place on 30 May 1973 and the councils were officially established on 1 October that year. However, the fall of the first Northern Ireland Assembly in May 1974 resulted in major decisions being taken by direct rule ministers and their officials. The councils were important forums for debate and political activism over the next 25 years.

Many councillors over the years have spoken of their satisfaction of getting things done for ratepayers or standing up to central government. For some, a term as Chairman, Mayor or Lord Mayor was a significant step on the way to higher office. Most members of the Executive started their careers in local government. The local parties were collectively an official opposition to the direct rule administration and councillors made up the vast majority of their representatives on the ground.

While the responsibilities of the councils were small compared to their counterparts in Britain, their work was highly significant to local people who in turn demanded high standards. Families relaxed in the parks and leisure centres and looked forward to summer schemes every year. Regular bin runs and clean streets kept neighbourhoods clean and healthy – and council staff often carried out their work under threat at the height of the Troubles. Councillors also made their voice heard on our education and library boards but were removed from health and social services boards after criticising the Conservative Government’s policies.

Each council can look back over its own potted history, interspersed with royal and presidential visits, sporting events and civic anniversaries. It’s noteworthy that many councils inherited their traditions from their predecessors such as mayoral chains and freedoms of the borough.

New customs also evolved, as seen in the granting of city status to Armagh, Newry and Lisburn. Despite the often sharp political differences between the parties, enduring working relationships (and friendships) were built up which transcended sectarian divides. Power-sharing developed with the first arrangement being established in Dungannon District Council in 1988. 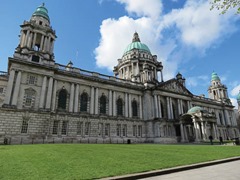 The setting up of a new power-sharing Executive in 1999 led to the Review of Public Administration which considered the overall shape and organisation of the public sector. An initial reform model, made under direct rule, envisaged seven ‘super-councils’. This was supported by Sinn Féin on grounds of efficiency but opposed by the other main parties as being too distant from local needs. In 2008, the Executive settled on 11 councils although the SDLP and UUP would have preferred 15, again to ensure a closer link with localities.

The aim was to hold elections to the new councils three years later – ‘11 in 2011’ – but the process was suspended in 2010 after disagreements over the cost of reform and the boundaries of the new councils. During the current Assembly term, the parties reached agreement on those issues and the countdown restarted. The number of councillors would be reduced from 582 to 462.

Elections to the new councils, in their shadow format, took place on 22 May 2014. As the members of the existing councils were elected in 2011 for a four-year term, they continued in office until midnight on 31 March 2015.

Power over planning will be the most significant difference that ratepayers will notice. The councils will also be responsible for promoting local enterprise and local tourist attractions. Regeneration and support for the community and voluntary sector will transfer to their remit in April 2016.

Councils will also represent their residents’ interests on policing and community safety partnerships, local commissioning groups for health and social care, the Housing Council, and the boards of the Housing Executive, Libraries NI and the Public Health Agency.

“Under the new system, local councillors will have a real opportunity to transform the look and feel of their own areas and create places that reflect the local culture and environment,” Environment Minister Mark H Durkan has stated. “It will bring planning back to where it belongs, in the local community, making it more locally accountable.”

Speaking to agendaNi, Northern Ireland Local Government Association Chief Executive Derek McCallan said that the outgoing 26 councils served their communities well, delivering high quality services and civic cohesion at an affordable cost. He added: “One of the most efficient parts of the public sector and potentially the most dynamic, the new 11 councils will aim to achieve long-term sustainable economies and strong communities, utilising their new powers sometimes collaboratively, always innovatively, to benefit their districts.” McCallan concluded: “Strong local government works and can play a pivotal role in the future Programme for Government.”