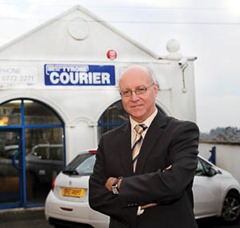 As editor of the Tyrone Courier, Ian Greer’s circulation area covers Dungannon, Cookstown and Magherafelt. Here, he discusses his career to date, the workings of the paper and the highlights of covering rock music in the course of the job.

What sparked your interest in the media?

Newspapers have been part of my life since my youth. While at school, I delivered newspapers each evening for a local newsagent and was named Northern Ireland Newsboy of the Year in 1974.

I really wanted to be a cartoonist and admired the work of the late Rowel Friers in the Belfast Telegraph. Cartoon opportunities in newspapers were limited in the early 1970s, so I decided on a career in journalism. I started work as a journalist with the Mid-Ulster Mail in Cookstown in 1976, later becoming deputy editor, before moving to the Sunday News in Belfast, where I was chief sub editor.

I joined the Alpha Newspaper Group and later Trinity Mirror, becoming deputy night editor on the Sunday Mirror. I have also worked on the News Letter, Daily Mirror and Sunday People.

In my 38 years in journalism, I have created and helped create a number of new newspaper and magazine titles. While at Trinity Mirror, I was instrumental in the establishment of the Ulster and Irish editions of the Sunday Mirror in Belfast and Dublin. At the Alpha Newspaper Group, I established two new newspapers: the Ballyclare Gazette and the Larne Gazette.

As a parishioner in Derryloran Parish Church, Cookstown, I set up an award-winning parish magazine, which prints its 100th edition in 2015. More recently, I established a new magazine for the Royal Black Institution called ‘The Black’.

Please describe a typical week at the Courier.

For the past 13 years, I have been editor of the Tyrone Courier in Dungannon. The Courier is the largest selling weekly newspaper in Northern Ireland. It is an extremely busy newspaper with two court sittings each week and three council areas to cover: Dungannon, Cookstown and Magherafelt. Our working week is also spent reporting on a plethora of community and news stories, special features, youth events, entertainment, church, motoring, property, farming and sport. Local journalism sees the Courier at the very heart of the local community and it is an extremely busy and fulfilling job.

In 2009, the Courier was named Local Newspaper of the Year at the Slugger O’Toole Awards and we received a framed cartoon by Martin Rowson, cartoonist with The Guardian, London. 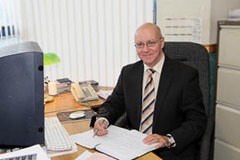 What have been the most memorable stories over the last year?

The most important events this past year have undoubtedly been the changeover from district councils to the new super-council and the ongoing wrangle over the police, fire and prison training college at Desertcreat, outside Cookstown. May last saw the elections of super-councillors ahead of the new Mid-Ulster super-council in April, 2015, which will herald the beginning of a new for councils.

The Courier has been following the policing college since its inception in 2004. It has been a roller-coaster ride ever since and in November there were reports it was being scrapped. However, the Executive has said it is still committed to the college, albeit on a smaller scale due to “budget restraints”. There are 2,000 jobs and much-needed investment for Mid-Ulster depending on the college and, with £12 million invested already, the project has come too far to be rejected.

How has the paper branched out into other languages?

The Courier was the first newspaper in Ireland to introduce a bilingual column and carry regular material in an immigrant language. Born in 2004, the idea was to cater for the migrant population, which totalled a tenth of the town’s population at the time.

The Courier column was published in Portuguese and English so that all readers were familiar with the content. So successful was the column that businesses locally began advertising in different languages. The Courier now publishes the column in Portuguese, Lithuanian and Polish.

How do you spend your free time?

Family, friends, music and travel. In my spare time I am also press officer for Mid-Ulster District Scouts. I am passionate about rock concerts and festivals and through my job I have been very fortunate to meet and interview many of my heroes i.e. Queen, Quo, Lizzy, Def Leppard, Jethro Tull, Paul McCartney, Rush, Rainbow.

A funny thing happened this year. Arrangements were made for an interview with Bon Jovi’s Richie Sambora to promote a tour. He was phoning from New Jersey, USA, and due to the time difference, the phone call was made to my home in the evening. So there I was sitting in my kitchen with a coffee waiting on a call from Richie Sambora. Doesn’t get much better than that.