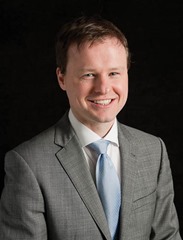 Chris Buckler is a BBC Ireland correspondent and presenter of Good Morning Ulster. Originally from Helen’s Bay, he attended Queen’s University Belfast and the University of Ulster, and worked for the Belfast Telegraph before joining the BBC.

How did your media career come about?

While I was studying at Queen’s University in Belfast I bluffed my way into reporting for what was then BCR (Belfast Community Radio). I heard they were starting a new evening speech programme so I contacted the station directly and they gave me a chance to put together radio packages. I didn’t have any experience other than writing a few articles for student newspapers but they gave me an opportunity.

I went out with a tape recorder and a microphone and found a story. When I went back to the radio station they helped me to package it and then it just became a regular slot. Twice a week I was responsible for providing a five minute radio report – for which I was paid the princely sum of £7.50 per package.

When the station became the more commercial Belfast Citybeat they put all the speech content into a nightly two hour timeslot presented by a fledgling talent called Stephen Nolan. They had no-one to produce the show so they asked me. I ended up working five nights a week while I continued my studies at Queen’s and later the University of Ulster. It was the best opportunity I could have been given. Every night there was a two-hour programme where both Stephen and I had free reign to do what we wanted. We did light features, heavy interviews and controversial debates – literally anything we wanted. It was a rare and genuine opportunity to experiment on-air and learn how to make radio programmes.

From there I started working for the Belfast Telegraph and then I won a place on the BBC’s news trainee scheme. The training was second-to-none and that led to a permanent job in the BBC working for Radio Ulster, BBC Newsline and later network news. The other Belfast trainee that year was Andy Martin, who has not only been a friend ever since but he currently works alongside me as the BBC’s other Ireland correspondent.

What have been your most significant scoops?

I broadcast live from the middle of the Manchester riots whenever police were clashing with rioters and from the end of the manhunt that followed the Boston marathon bombings (a trip which started as a holiday).

But some of the most significant exclusives I have been involved in relate to the issue of child sexual exploitation. They include revealing mistakes made by police in Manchester in their handling of cases of grooming, revealing flaws in schemes designed to protect children and exposing how some sporting organisations had effectively hidden abuse cases.

What makes for a good breakfast radio programme?

A hundred different people will give you a hundred different answers. And that is reflected by the broad range of breakfast programmes the BBC alone broadcasts. But Radio Ulster is unique. Good Morning Ulster has the resources to give people here all the information they need first thing – and you won’t find better weather, traffic and travel, business and news coverage.

But the programme should be doing much more than that. We should be picking away at stories to see what they actually mean, holding people to account and questioning what they are saying. In the era of texts and tweets we know what listeners think pretty much immediately. They don’t always think we are getting it right particularly when it comes to local politics. But on big political issues it’s not uncommon to receive accusations of bias from both sides of a debate. That is probably an indication that we are doing the job properly.

I think listeners want a friendly tone but they also want us to be authoritative in setting the agenda for that day. That means giving them details of the big stories here, in the UK and internationally, as well as an idea of what developments there are likely to be later that day. People will always argue over what is covered – that happens inside the team as well. Virtually every day there are debates about the lead, the order of the stories and what should be covered in the first place.

With all the regular doom and gloom you do need a bit of light. If we haven’t made you smile or given you something to gossip about at work then we haven’t got it quite right.

There are too many to mention. The former Ireland correspondents Kevin Connolly and Denis Murray were both very good to me when I started working for the network bureau in Belfast. They had huge amounts of experience in explaining stories from Northern Ireland to audiences not just elsewhere in the UK but all around the world. Just watching them helped me understand what the job was really about.

Every TV correspondent is incredibly dependent on their cameramen. Pete Cooper retired from the Belfast bureau last year after 46 years in the BBC. I was given opportunities as a result of the pieces he expertly put together and I will always be extremely thankful to him for that. His successor Davy McIlveen is another star and again I am living off his extraordinary talents. If a report looked good it was probably down to him.

You’ll find me at the cinema, on the sofa watching box sets or out eating with family or friends. I am frankly rather dull outside work … and some would say inside it too.