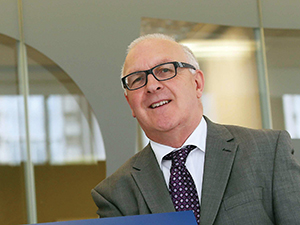 News Letter Editor Rankin Armstrong discusses a career that has spanned over 40 years in print journalism.

I started my career in the Armagh Guardian in December 1971 following my A-Levels and a commercial course at the local technical college. I’d always been interested in writing since primary school and one things that sticks in my mind is winning a prize of Cadbury’s chocolate bars for essay-writing.

At primary school, I had a passion for reading: I loved Richmal Crompton’s Just William series and Enid Blyton’s Famous Five and the Rover and Adventure stories. My first forays into reporting saw me writing a page for younger readers called Youth Beat with Rankin Armstrong, in which I wrote about a variety of subjects, including young musicians, emerging bands, under-age-drinking and people’s attitudes to men with long hair! There were also the more serious aspects of reporting, including interviewing the bereaved and writing obituaries, and covering the local magistrates’ court.

It was a case of learning on the job. The paper was printed in Portadown, so we typed up our stories, kept the carbon copies and sent the originals in a package by bus for the compositors to input, and as the junior reporter I was the one who had that walk to the bus depot. In January 1976, I moved to the Portadown News/Craigavon Times, working there until April 1977, when I joined the Belfast Telegraph as a sub-editor. I worked there for 17 years, before moving to the Irish News as chief sub-editor.

In September 1997, I took on the role of coordinator of the practical journalism module at the University of Ulster’s course for students studying for a PG/Dip in newspaper journalism. It was a great year, with a fantastic bunch of enthusiastic young people, many of whom have gone on to forge successful careers. I enjoyed my year, but the call of newspaper work attracted me to the News Letter in July 1998. I have worked there since in various senior roles, becoming editor in September 2012. 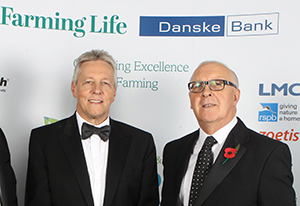 Who do you most admire within your profession and why?

I admire the foreign correspondents, the camera crews and the photographers who put their necks on the line and go into war and disaster zones. It wouldn’t be fair to name any particular individuals but Northern Ireland has produced a number of first-class journalists who have made their mark on the international scene.

I have to praise the very courageous local journalists who have dared to probe the murky world of paramilitarism and crime, and those who have been on the front line covering the conflict in Northern Ireland over the years.

What have been your most significant stories?

My personal account of being in New York at the time of 9/11 comes to mind. I was on a family holiday when the atrocity unfolded and I emailed a number of reports in its aftermath. I described the dreadful atmosphere as crowds gathered to pray at St Patrick’s Cathedral in Manhattan, with thoughts of those who had perished as the Twin Towers had crumpled firmly in their mind.

Otherwise, as an editor, I think of the teamwork involved in covering the elections, the historic events at Stormont, the annual parading seasons, Royal visits, big sporting occasions, and the many people I have come into contact with who have shared their lives with our journalists and the readers.

Describe a typical day at the News Letter?

We start the day by checking the stories that are trending on our website, and prioritising the stories we want to follow up, as well any accompanying videos that are needed. Our news desk diary will also have been marked up as to what is happening at Stormont, around the courts, any concerts, sports events, etc.

We also take stock of issues that readers may be raising through phone calls, emails and letters, and we monitor radio output and what other media are reporting. A daily morning conference with senior staff discusses the stories we will pursue, and the news editor assigns reporters to various jobs.

Planning is important and every Monday we have a meeting with the heads of news, features, sport, business and farming sections. This provides an opportunity to plan coverage of events, discuss potential supplements, share ideas, look at pagination, staffing levels and identity issues that need to be addressed at an early stage.

In your view what makes a good story?

I would say it’s one that gets people talking, that raises issues, or holds authorities to account, and that may challenge you to look at things in a different light. It could be a piece about hospital waiting lists, political developments, the death of a household name celebrity, a big sports event, or a huge lottery win. It’s easy to follow the progress of stories on digital platforms; you can see which ones are hitting the most-read areas, and social media posts can pave the way for even greater exposure to bigger audiences.

What advice would you offer someone starting off in journalism?

Be prepared to listen and learn; put in the hours and do the tasks that don’t pay off with instant bylines and rewards. Volunteer for the weekend and evening markings that others don’t fancy, and that could well pave the way to recognition and progression.

How do you see newspapers developing in the next few years?

Most newspapers have already moved away from solely print operations, reaching audiences via websites, phones and social media. Many readers now have online subscriptions, but in Northern Ireland there is still a substantial market for print editions, and papers such as the News Letter still have a significant, loyal readership.

Newspaper sales across the board are declining, but there will always be a place for trusted outlets. Already papers are having to meet the needs of two distinct audiences: those regular readers who already buy the traditional paper and those who may never buy the paper but go online and dip in and out of various news sites. It’s a challenge that faces all media outlets and requires a change in how news organisations operate.

How do you relax outside of work?

I enjoy family life, having three grown-up children, and a fifth grandchild on the way. Also, I relax by listening to music: I have a collection of CDs, including the Beatles, Neil Diamond, Van Morrison, ZZ Top, and David Bowie. I try to see musicians playing live in Belfast, and this year I saw Sting and Paul Simon in concert. I really must get to more of the Ulster Orchestra concerts. Over time my wife Janet and I have enjoyed holidays in Italy, Poland, France, Germany, Croatia, the US and Canada, and when I retire shortly, we are going to visit our younger son who is living in Melbourne.