The DUP remained the largest party in terms of seats in Northern Ireland’s local government makeup. However, such a stat does not tell the full story of an election where Sinn Féin were the only of the traditional big four parties not to lose seats from their 2014 tallies and all unionist parties suffering losses.

Despite the loss of eight seats, the DUP remained the largest party with 122 seats spread across Northern Ireland’s 11 local councils. Again, this stat does not tell the full story, with the DUP being the only one of the big four parties to increase its share of first preference votes. The party’s 1 per cent rise — from 23.1 per cent in 2014 to 24.13 per cent in 2019 — suggests a consolidation of its core vote, but its loss of seats suggests a lack of transfers and a falling out of favour in non-unionist areas.

While they maintained control of the six councils that they had controlled before the election, the DUP suffered a loss of seats in all but one of these areas. Only Causeway Coast and Glens Borough Council saw the DUP increase their number of seats in a previously held area, from 11 seats to 14. Significant losses include the loss of five seats — from 20 to 15 — in Lisburn and Castlereagh, where Sinn Féin won two seats for the first time and the Alliance gained two seats.

The party may take some encouragement from the gaining of one seat on Belfast City Council, rising from 14 to 15, where Sinn Féin lost one seat, but still retained control with 18 seats.

The election was one of loss for unionism as a whole, with 29 seats lost overall by explicitly unionist parties (DUP, UUP, Traditional Unionist Voice and Progressive Unionist Party). First preference votes for unionism also saw a decline: the previously mentioned four parties and the explicitly unionist UKIP and NI Conservatives saw their total share of first preference votes fall from 47.5 per cent in 2014 to 39.87 per cent this time around.

The UUP tallied 75 seats, 95,320 first preference votes and a 14.1 per cent share of the first preference votes when all counting had finished; their lowest postings in all three categories since local government in Northern Ireland was reorganised by the Local Government (Boundaries) Act (Northern Ireland) 1971 and the Local Government Act (Northern Ireland) 1972. Their loss of 13 seats from 2014, and the Alliance Party’s gain of 21 seats would seem to suggest that the moderate unionist vote has migrated not to the DUP, as some may have predicted, but to the centrist cross-community party, whose roots lie in the moderate unionist New Ulster Movement, who gained a previously UUP seat in the Lisnasharrgh electoral district of Belfast. 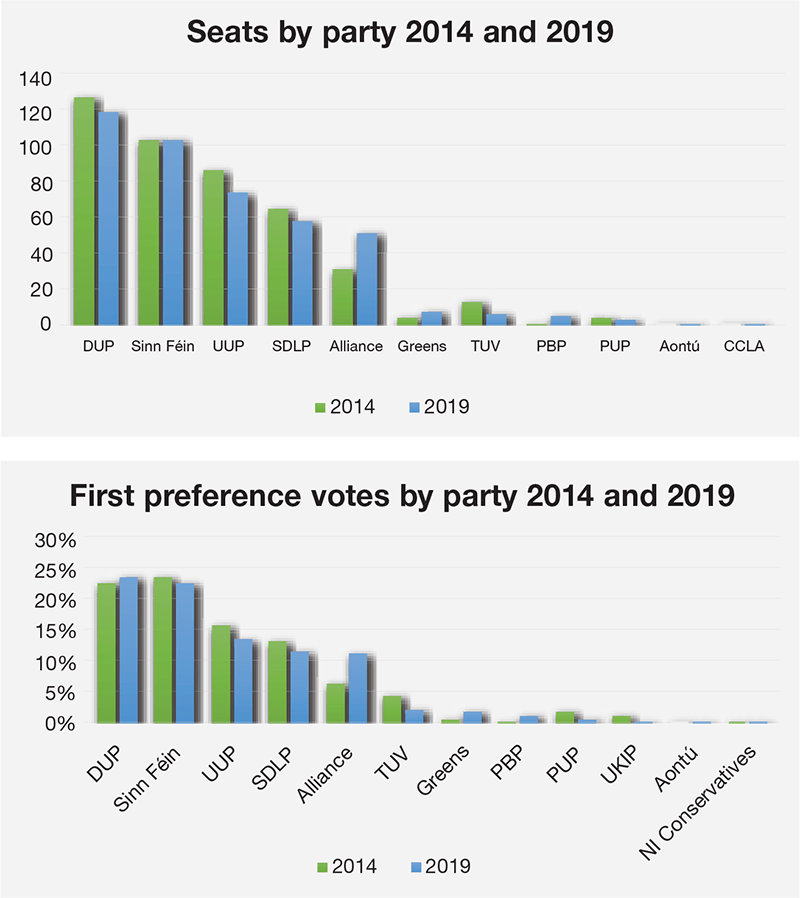 For Sinn Féin, the election was a static affair. Having entered with 105 seats as the second biggest party in that regard, they exited with 105 seats, still the second biggest party. Having won outright control of four councils in 2014, while sharing Newry, Mourne and Down with the SDLP, Sinn Féin now outright control four councils and share control of Derry and Strabane District Council with the SDLP. Their first preference vote fell from 24.1 per cent in 2014 to 23.22 per cent, allowing the DUP to overtake them as the biggest party in Northern Ireland in that regard.

While Sinn Féin had hoped to make gains within Belfast City Council, they ended the election with one less seat in the capital, but still as the largest party. The gain of an SDLP seat in Black Mountain was chalked off after the party was outflanked to the left by People Before Profit in Collin and to the centre by Alliance in the Titanic DEA.

Explicitly republican/nationalist parties also saw a drop in their number of seats. In 2014, Sinn Féin and the SDLP won a combined 171 seats; in 2019, Sinn Féin, the SDLP and Aontú, the anti-abortion republican party of ex-Sinn Féin TD Peadar Tóibín, won a combined total of 165. First preference shares across republicanism and nationalism also fell, from 37.7 per cent of the vote in 2014 to 35.49 per cent in 2019.

It was another disappointing electoral campaign for the SDLP, whose loss of six seats was paired with a 1.59 percentage point drop in their share of first preference votes. What little consolation they may be able to draw will come from the party’s performance in Derry and Strabane, where three seats were gained, meaning the party is now the joint-biggest on the council along with Sinn Féin.

The truest and easiest to identify gains were made outside of Northern Ireland’s traditional political dichotomy of unionism versus republicanism. The Alliance Party were the clearest winners of the day, with a gain of 21 seats and the largest rise in first preference votes of any party. The rise from 6.7 per cent in 2014 to a vote share of 11.5 per cent almost approaches the party’s 1977 high of 14.4 per cent. The Green Party doubled their seat tally, from four to eight, and more than doubled their first preference vote share, jumping from 0.8 per cent to 2.11 per cent.

Leftist parties that remain non-aligned on the national question also experienced a boon, with the Cross Community Labour Alternative party winning their first seat ever, on the Fermanagh and Omagh District Council. The highest profile of the leftist parties, People Before Profit, also enjoyed their best ever local election results, again more than doubling their first preference vote share from 0.3 per cent to 1.4 per cent and jumping from one seat to five. Notable performances include that of Matt Collins, the only non-Sinn Féin councillor elected in Black Mountain, who topped the poll with 2,268 first preference votes.

With three of the big four declining in their number of seats and a different group of three declining in terms of first preference votes, the latest round of local elections in Northern Ireland suggest that the term “big four” may just be on its way to becoming irrelevant.