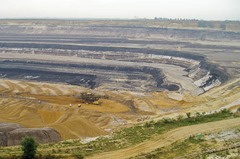 Misleading prices and a poor grasp of technology undermined the case for a lignite gasification plant in the early 1980s.

A major project to produce lignite gas near Crumlin in County Antrim was abandoned in 1982 after it was discovered that the developer had little knowledge of the process. The company had also misled Northern Ireland Electricity about the expected price for the fuel.

The critical report was prepared by the Department of Economic Development’s Energy Division on 14 September 1982 and presented to the department’s Minister, Adam Butler.

A mining company, Northern Strip Mining, had claimed in August 1982 that it was possible to produce gas from the lignites “at a price which would compete with that of Kinsale gas.” Officials were “very sceptical of that claim because all the information we had indicated such a process to be uneconomic.” This was confirmed in a report from Coopers and Lybrand’s energy consultants.

The company’s claim had been based on “very preliminary information about the production of natural synthetic gas” and overall costs would exceed £300 million. The process is an above-ground technology for coal liquefaction and also used in shale oil extraction.

When this was put to Northern Strip Mining in the following month, the company “had to admit that it couldn’t claim to have any particular knowledge of the subject”. Its enthusiasm for lignites seemed to be “based on an urgent desire to find a profitable mining project and almost no understanding of the technology or economics of gasification.”

The department said that a competitive price would be £5 per tonne or under whereas Northern Strip Mining said that it could produce it for £7.50 per tonne. The company, though, was giving Northern Ireland Electricity a supply price of £20 per tonne and the Energy Division was pleased that it had “exposed the pricing policies and practices” involved.

In any case, a synthetic natural gas plant could not come on stream before 1988-1989 “at the earliest” but Kinsale gas was “assumed to become available” in 1984. Relying on the gasification of lignites would mean a £60 million subsidy to keep town gas in place until the plant started operating.

A “novel and highly capital intensive project” such as this plant would be “very sensitive to capital cost or throughout variations.” The officials emphasised that a pipeline project “would be considerably less sensitive to such uncertainty and would therefore be less risky as well as less costly”.

Adam Butler was the son of the veteran Tory politician Rab Butler and was assigned to the NIO between 1981 and 1984. He retired from Parliament in 1987, to work in the family firm Courtaulds, and died in 2008.