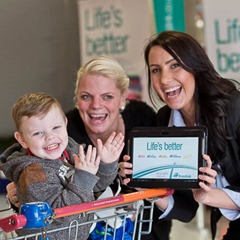 Translink’s ‘Life’s better’ campaign is directly engaging with the public to highlight all the lifestyle benefits of using bus and train services.

More people are using passenger transport with 78.5 million journeys made on Translink services last year – an additional 1.5 million compared to the previous year. As a large business, Translink recognises its ability to be a force for good, making lives better right across Northern Ireland.

Most recently, Translink launched a new campaign called ‘Life’s better’ that highlights all the lifestyle benefits of using the bus or train: more time to relax free from the stress of driving in traffic, more time to catch up on work or social activities, making use of free Wi-Fi on board trains and coaches, reduced journey times, as well as money savings compared to paying for fuel, parking and car maintenance costs.

As part of the campaign, Translink customers right across Northern Ireland are sharing their own unique journey experiences. There are now around 100 ‘Translink Ambassadors’ – passengers who are encouraging their own friends, family, peers and colleagues to try the bus or train.

Making lives better is the primary focus of Translink’s Corporate Responsibility Strategy. The business carefully manages its impact on society and the environment through both its operations and engagement with stakeholders such as employees, customers, government and suppliers. The strategy framework is guided by four key themes: Go Safe, Go Eco, Go Healthy and Go Together.

• Go Safe: a range of initiatives are in place to ensure the safety of customers, employees and the public. Rail safety campaigns, marketing campaigns targeting the agricultural community, a dedicated safety bus team and schools’ travel challenge are just some of the ways Translink addresses this serious issue;

• Go Eco: Translink carefully manages and minimises its environmental impact and has made huge advances in reducing carbon emissions. The business removes more than 60,000 cars from the roads in Northern Ireland on a daily basis. This provides a net reduction in local carbon emissions of over 50,000 tonnes per annum. Approximately 1,160 buses are now equipped with new Eco Driving technology with more than

1 million litres of fuel saved per annum. A Biodiversity Action Plan is also helping to protect priority habitats and species identified across the Translink network;

• Go Together: Translink continues to engage directly with local communities through sponsorships, partnerships and charitable initiatives. From festivals to awards, youth initiatives to competitions, Translink is making a positive difference to the lives of thousands of people in Northern Ireland. Following a successful partnership with Diabetes UK Northern Ireland, Translink’s current official charity partner is Macmillan Cancer Care with company-wide fundraising activities raising vital funds for this important cause. For further information on Translink’s corporate responsibility activities click www.translink.co.uk/corporate