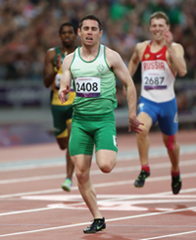 Excellent Paralympic performances have confirmed Jason Smyth and Michael McKillop as the world’s fastest runners in their fields. The athletes recall their achievements and share their hopes for future success with Peter Cheney and Meadhbh Monahan.

“To be honest, they were unbelievable,” Smyth says of the games, pointing to the high level of organisation. The roar of cheers around the stadium still resonates with him.

“For me, the most memorable moment was when you were standing at the start line and they go through the athletes and they read out: ‘Jason Smyth, fastest Paralympian on the planet.’ The whole place just erupts and the amount of support there that was for me was absolutely crazy.”

Back in 2008, the support in Beijing was “fantastic” but seemed rather staged whereas in London, the crowd was clearly out to support the athletes and knew them by name. Winning two golds, standing on the podium and running the lap of honour were all fantastic moments. A home games, with family and friends present, added to the atmosphere.

“I think it has been the best Paralympic Games and I think that Brazil will struggle to match it,” he added. “They couldn’t, in my opinion, have done much of a better job and the key’s going to be: ‘Does the momentum continue?’ because Paralympic sport has really come out of the darkness.”

That question is an especially relevant one for Smyth as he searches for a new coach and training base, to prepare the way to Rio 2016. While very thankful for grants from Sport NI and the Irish Sports Council, he sees a clear need for Paralympic successes to be treated as equals to Olympic triumphs.

“If I came home, doing as Usain Bolt did, winning the 100m in the Olympics, the awards I would get for that would be colossal: the amount of money you would make, the amount of support and sponsorship you would get,” Smyth explains. 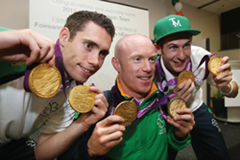 His level of support remained mostly the same after winning in Beijing but is still not enough to meet all his training needs. Stephen Maguire, his coach from the start, accompanied Smyth on his trips to Florida for training with Tyson Gay, second only to Bolt in speed. However, they no longer have sufficient finance for that and Maguire had to move on and find a different job.

“It’s very unfortunate because look how far I’ve come and what I’ve achieved. And it requires a lot more effort and work coaching me just because of my visual impairment,” Smyth remarks. “Things are a little bit more difficult, and I’ve now got to look at where I’m going to be based and a new coach, and I’ve got to hope that things continue to go as well as they have.”

Choosing the next coach will be a “massive decision” but he hopes that support will improve following the games’ media coverage. Channel 4 “did a fantastic job to get the people aware of it.”

Going into the 100m final, he knew that he was in a good shape. “It’s nice to be able to go out and run a world record in the heats, and it filled me with confidence going into the final,” he says.

“I knew I was quickest in there and I knew that I had to just make sure my race was right, execute my race, and thankfully I was able to do that. Looking back at the race, I had got them at the start really and it continued on. The race happened so quickly.”

Long hours of sacrifice and training had finally paid off. “You put in work every year for things like world championships but the massive thing is every four years for the Paralympics,” he continues. “To think, I train 11 months of the year, six days of the week for a 10-second race.”

Smyth adds: “It’s all down to that one moment so you can imagine there’s a lot of relief at achieving that. That was unbelievable and then you can just enjoy running round that lap of honour, and it was fantastic.”

Six days later, his confidence for the 200m final was running high. Breaking another world record meant that “it really couldn’t have gone any better.”

Missing out on the London Olympics by 0.04 seconds was a setback but has increased his determination to achieve that in Rio 2016. Reaching his target of two golds in Rio would cap the same success in both Beijing and in London.

“It’s really frustrating, for the amount of work and amount of sacrifices that I’ve put in to try and achieve in that but I firmly believe the best is yet to come,” Smyth says. “I started into the sport quite late. I’m improving.”

“It was a wonderful experience that I’ll never forget,” McKillop relates. “The fact that it was in London made it more special because my parents, grandparents and friends were able to come as it was so close, unlike at the Beijing Olympics.”

As well as winning his two golds, he was delighted to have jointly won the Whang Youn Dai Achievement Award, which recognises athletes who best exemplify the Paralympic spirit. That accolade recognised his visits to primary schools, across Northern Ireland and further afield, with the message that sport is for everyone.

“Young people aren’t generally taught about disability and I want to explain that having a disability doesn’t mean anything if you focus on the ability that you do have,” he explains. “Anyone has the ability to become ‘super-humans’ which is what we Paralympians were described as during the Paralympics.”

McKillop has had “a positive frame of mind” about his disability from a young age as he has grown up with it. He adds: “I have participated in able-bodied events but to be a front-runner in Paralympic events and to pull on your country’s jersey or vest and to win for your country is an amazing experience.”

The Paralympics inspire people and bring “an extra enjoyment factor” for the public. He went into both races following wins in the world championships. “What if I don’t win? What will other people think?” was a thought running through his mind but he wanted to repeat his performance from Beijing.

With his 800m times improving year on year, he is getting “stronger and stronger and faster and faster” and his immediate aim is to defend both titles at next year’s International Paralympic Committee Athletics World Championships in Lyon.

All of the Paralympians’ achievements were reached with families backing them all the way. 25-year old Smyth has lived with the effects of Stargardt’s disease since he was eight. Michael McKillop (now aged 22) was diagnosed with a mild form of cerebral palsy at the age of two.

Speaking of his parents, McKillop tells agendaNi: “They’ve fought to get me the best specialists, the best physios, to make sure that later on in life, disability wasn’t going to cause any problems in my life and I was going to live as normal a life as possible. You can’t really thank them enough because if they hadn’t done that, I would have been severely disabled and struggling to live a normal life.”

“It’s not just me that steps on the starting line,” he points out. “I’m the finished product but behind me, there’s so many people.” Funding came from the Irish Sports Council and medical help from the Sports Institute, and physiotherapists and doctors at Paralympics Ireland. He also credits supporters throughout Ireland.

Alongside his parents, Jason Smyth was a “huge influence.” McKillop comments: “He kept me calm and relaxed before the races. He knew how good I was and he knew that if I just went out there and executed my race, that I was going to be fine. I’d be ready to race and go on and win.”

South African sprinter Oscar Pistorius, to him, shows how the barriers between Paralympic and Olympic sport are being removed. “It clears the line and shows that Paralympians are now stepping across the line to compete with the other athletes and if you’re good enough, you’re able enough. It doesn’t matter if you have a disability, you can go out there and perform.”