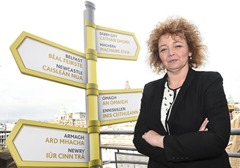 Culture Minister Carál Ní Chuilín has published two strategies to develop the Irish and Ulster-Scots languages and their heritage and culture up to 2035.

The strategies cover education, public services, media and culture, taking account of the needs of the communities and international best practice.

The key objectives of the Ulster-Scots strategy include providing sustainable and quality educational provision relating to all aspects of Ulster-Scots language, heritage and culture.

This includes renewed support for an Ulster-Scots academy, which was first proposed in 2006.

Cultural and heritage-based tourism is another suggested method to sustain and grow Ulster-Scots heritage both at home and abroad.

The Irish language strategy meanwhile aims to make positive attitudes to the language more common throughout the community.

Local initiatives will look at involving children, young people and adults in the language and will include projects such as Irish language youth clubs and mother and baby groups. It also carries an outline for the much-debated Irish Language Act which is supported by nationalists but strongly opposed by the main unionist parties. The Alliance Party proposes a Comprehensive Languages Act for all minority languages.

Ní Chuilín commented: “Language, heritage and culture are important to all of us. They give us a sense of place and help us to understand who we are and have confidence in our identity.”