Travelling throughout Ireland is becoming much easier thanks to modern roads that cut journey times drastically and make previously unconsidered trips more realistic. 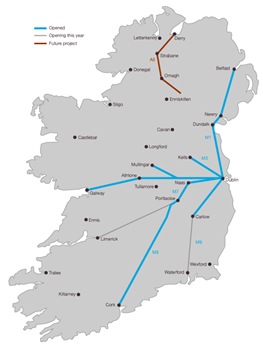 Gone are the days of police check-points which were symbolic of the Troubles. Ireland’s roads are now a sign of the island’s integration, not division.

The 80km M1 Newry to Dublin motorway helped cut the travel time between Belfast and Dublin from around three hours to one and a half. It was opened in August 2007 and cost approximately €1 billion.

More recently, in May, the M7 and M8 motorways from Dublin to Cork were completed, reducing the journey time from Dublin’s Red Cow roundabout to Cork’s Dunkettle Interchange from about three hours to two hours and 20 minutes. According to the AA, in the 1970s and 80s, the average journey time between these two cities was around five hours. The 90 minutes from Belfast to Dublin, means that in theory, a drive from Belfast to Cork would take four hours.

In addition, the opening of the €1 billion, 60km M3 across County Meath from Kells to Dublin, has cut the journey time from Fermanagh and west Tyrone to Dublin to around one hour and 15 minutes.

Across Ireland, from Galway to Dublin, the €1.1 billion M6, has cut journey time for the 194 km route to just two hours.

Although construction of the roads infrastructure in Northern Ireland hasn’t been on the same scale as the Republic during the Celtic Tiger era, work has begun on the A5 Western Transport Corridor. The 86km route will connect Derry and Aughnacloy. Cost estimations are between £650 and £850 million.

In the West, the only way to get to Sligo or Donegal for many people is through Enniskillen, which is over-congested and can take up to an hour to travel through. Plans for the southern by-pass – which would take traffic on a bridge over Lough Erne to the west of the town – will not be presented to the public until autumn 2010, and Roads Service officials have said it is not likely to be completed for another 10 years.

The superior infrastructure has made it easier for criminal and terrorist gangs to get around the island. Road checkpoints manned by gardaí, Revenue Commissioner staff, and social welfare inspectors have been set up in border areas from Donegal, through Monaghan, Cavan and towards Dundalk. They also operate further south for criminals who do manage to make it across the border.