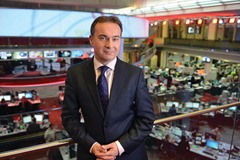 John Moylan is the BBC’s Industry and Employment Correspondent, also covering energy. Based in London, he has had an extensive career so far in BBC News after starting off in Tomorrow’s World.

How did your career in journalism begin?

It was part luck and part persistence. I left St Malachy’s College in the mid-80s and headed to Manchester to study a degree in engineering. My first job was in research and product development for one of the big industrial players of the day, Thorn EMI.

One day I picked up a magazine and spotted a scheme which gave scientists experience working in the media. I applied and within weeks I was standing in a studio at Television Centre watching an item I’d produced going out live on the Tomorrow’s World programme.

A year later, I joined the team producing business stories for early morning TV. That opened the door to reporting.

What do you see as the most significant trends in your brief?

II was based in our Brussels bureau in 2005-2006 when the Russians cut off gas supplies to Ukraine. The same pipeline fed Europe and within days there were gas shortages. Since then, I’ve been fascinated by energy. I’ve been offshore several times, from the North Sea to the Gulf of Mexico – the underwater helicopter escape training isn’t for the faint-hearted. In recent months, the growing political row over energy prices and the emerging fracking industry has been keeping me busy.

I also cover major sectors like aerospace, defence and the automotive industry. I was at Jaguar Land Rover’s plant in Solihull recently; they can’t make enough of their premium vehicles for export around the world. The UK could soon produce more cars than it did in the 70s. So the big test of Vince Cable’s industrial strategy is whether that success can be replicated elsewhere to rebalance the economy.

And then there’s the labour market conundrum. Throughout the downturn, the economy continued to create jobs. The number of people in employment has never been higher. The Bank of England has been caught out as unemployment falls towards 7 per cent. Economists talk of a “productivity puzzle”. Why are firms hiring when productivity remains low?

Trade unions are also part of my brief. They’re facing challenges in this recovery too. Their members desperately need a pay rise after years of pay stagnation. Can unions deliver this and ensure the benefits of growth are felt by both business and workers?

How does coming from Northern Ireland have an influence on your work?

I think it’s only ever been an advantage. The education system gave me a great start in life. Growing up during the Troubles also made me aware of politics and probably sparked my interest in news.

My accent has never held me back in broadcasting. I joined the BBC as 5 Live was taking off. Ever since, there’s been a growing appetite for more regional voices on air.

I also think people from the province have an engaging manner. We have a sense of humour. We’re interested in people. That matters in journalism. You need to be able to build relationships with sources to ensure that they give you stories first.

What stories stand out as the main highlights of your career?

The banking crisis has been an era-defining event. The recession that followed touched the lives of millions. The after-shocks are being felt to this day and it’s been extraordinary to be part of the team that led the BBC’s coverage. I was in Dublin in November 2010 when the IMF arrived in town so it was heartening to see the Republic exit the bail-out recently.

Work has taken me around the world, across Europe to the US, Central America and on to Asia. From diamond mines in Africa to the Space Shuttle launch pad in Florida. My dad spent his life at ports around Ireland dealing with freight. It gave me an insight into global trade and a few years ago, I hitched a ride on a super-tanker through the Panama Canal.

But the highlight was meeting Nelson Mandela. I was in South Africa reporting on the economy in the run-up to the 2010 World Cup. I was with a group of journalists that had an audience with the great man. I only had a brief moment in his company but it’s one I’ll never forget.

Paul Gibbs ran daily business programmes at the BBC in the 90s and gave me my first break in journalism. His wife, Eileen Fitt, is a former editor of the BBC Nine O Clock News and also one of Lord (Gerry) Fitt’s daughters.

Jay Hunt, who is now Chief Creative Officer at Channel 4, was one of the first editors to let me loose on a national news bulletin. They both have acute editorial judgement and know what engages an audience.

But broadcasting is a collaborative process. Over the years, I’ve been helped by numerous gifted editors and producers. My stories wouldn’t get on air without them.

I’ve probably learnt more about my trade from watching long-time colleagues like Rory Cellan-Jones, the BBC’s Technology Correspondent, and

Hugh Pym, our Chief Economics Correspondent. They both have an astonishing work rate and the ability to find new ways of telling familiar tales.

And it’s been a privilege working alongside Robert Peston during the financial crisis. He was always ahead of the game, breaking important stories and making the complex world of global finance clear through his blog.

What do you enjoy doing in your spare time?

News is unpredictable. There are frequent late nights. So at weekends I spend as much time with the family as I can. We live near Twickenham in South West London. There are lots of parks and riverside walks to keep our two young daughters busy.

I don’t have much time for golf these days but when I can, I jog. I managed a half marathon last year. Perhaps it’s time I tackled the full 26 miles?

And I love live music. I’ve been a fan of U2 since my teens. I spotted the Edge recently in London, so I went over and said: ‘Hello.’ He was lovely but I was completely star-struck. Embarrassing.