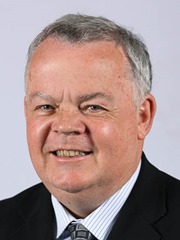 John Dallat has been SDLP MLA for East Londonderry since 1998. A native of Kilrea, John serves as a Deputy Speaker and is the SDLP’s Regional Development Spokesman. He taught business studies before entering politics and was also a member of Coleraine Borough Council (1997-2010) for the Bann area. He is Deputy Chair of the Assembly’s Public Accounts Committee.

How did your political career begin?

My political career began by accident, I suppose. My younger brother Michael received an invitation to come to a meeting to set up a branch of the SDLP in Kilrea. He was a university student with other things to occupy his mind so I went instead and joined up.

I was asked whether I would wish to be considered as a candidate but declined because I was teaching in Donegal and it didn’t seem appropriate or practical – but I did get involved in the campaign after I spotted people putting up boycott posters and felt that was very wrong.

What have been your main achievements?

There are many things I became involved in which I could count as my main achievements but I will single out two which meant a lot to me. Civil servants thinking ahead of themselves had concluded that rail transport was very expensive and the money saved could be used to speed up the building of motorways.

They targeted the Belfast-Derry line north of Ballymena after learning that millions of pounds would be needed to repair the track between Ballymena and Coleraine with the condition of the Coleraine-Derry section being even worse. The answer for them was to close it, suggesting mothballing which is death by slow strangulation.

Getting the seven councils along the line to meet together and commission a report wasn’t easy but it happened and today the Belfast-Derry line is carrying more passengers than the much acclaimed Enterprise service between Belfast and Dublin – which itself now needs massive investment just as the Belfast-Derry line needs additional investment to allow trains to operate an increased frequency.

My second achievement was to get involved in a cross-border campaign to stop the closure of the Coastguard station at Malin Head, County Donegal, which plays a major role in co-ordinating rescue missions in the North, particularly along the Causeway Coast.

The station, dating back more than a century, had been under threat on two occasions previously but now it seemed there was no hope – as the recent Minister for Transport Leo Varadkar has a reputation for not changing his mind.

After giving evidence to a Dáil committee on the need to save this seamless cross-border organisation, and the ensuing publicity which was generated, the Minister changed his mind. Now I am confident that the Malin Head coastguards will be in place for another hundred years, proudly carrying out their work in harmony with HM Coastguard, the RNLI and other voluntary bodies.

What are your main aims for the constituency?

East Derry has suffered horrendous unemployment in agriculture, textiles and not least the closure of the Seagate factory near Limavady which wiped out a thousand jobs. The closure of the DVA centre in Coleraine, creating another loss of 300 jobs, adds to the misery already experienced by the wider community as these job losses impact.

The new Kelvin communication cable – which came ashore near Portrush in recent years – needs to be exploited and hopefully when the promised enterprise zone comes of age, we can begin putting together the strengths of the university, colleges of further education, and the world-class communications infrastructure. Perhaps we will begin benefitting from new age of employment which as evaded us so far.

Support for small towns in the constituency is vital and needs to go beyond the practice of painting scenes on derelict buildings. There is evidence that this is happening and there is an indication that the modernising of the retail trade is at last offering a real chance that the large multiples won’t be taking over all and that our small towns and villages will not be left with no shops, no post office and no anything. 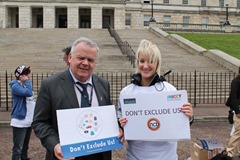 What role can the public sector play in economic development?

The public sector has seen many changes in how it operates and there is a greater appreciation of the work that is done.

Most importantly, there is an awareness that Northern Ireland is dependent on the public sector for jobs and the private sector is nowhere near a situation when it will absorb the massive number of people needing jobs, particularly among the young.

There is increasing disappointment that the Northern Ireland Assembly hasn’t seen the need to decentralise the Civil Service for many valid reasons. There is no need for thousands of cars going to Belfast every day when many of these jobs could be decentralised to our district towns with no loss in efficiency or effectiveness. Perhaps the proposal to transfer the Department of Agriculture and Rural Development to Ballykelly is a beginning but we must wait to see if it materialises.

The SDLP sees the west as in urgent need of investment in transport infrastructure to attract potential inward investment and make life for our producers in that region more profitable.

Relaxing is difficult for me and the only thing appearing to work is going out in my Morris Minor Traveller. The rattles and the vibrations rule out any possibility of a hands-free phone and concentration has to be focussed on keeping it between the hedges.