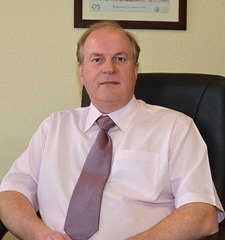 Ballymena Guardian editor Jim Flanagan shares his perspective on the newspaper industry, the need for real commitment to the community in the local media, and the risks that the internet poses to professional journalism.

How did your career in the media begin?

The Belfast Telegraph was part of Thomson Regional Newspapers in the 1970s and I undertook my formal training at their training centre in Cardiff in 1979, returning to take up a position as a trainee reporter on the East Antrim Times in Carrickfergus. I later became the paper’s chief reporter and office manager and helped launch the Newtownabbey Times in 1983.

It is an old but also accurate cliché that weekly newspapers offer the best training ground for any aspiring young reporter. No story is ‘too small or too big’ for local papers, which in Northern Ireland continue to thrive in a difficult environment.

I spent 30 years at the Belfast Telegraph in a variety of senior roles, including 10 years as deputy editor of the Telegraph right through the period leading up to the signing of the Good Friday Agreement and into the millennium, and also nearly four years as editor of Sunday Life. I have returned to my weekly newspaper roots editing the Ballymena Guardian and still get as much pleasure today from breaking a good story as the day I got my first job.

After four years in Ballymena, how would you sum up the area?

Ballymena is one of Northern Ireland’s regional ‘crown jewels’ supporting a rich, eclectic mix of business, cultural, sporting and artistic talent. It is a town of contrasting lifestyles combining thriving urban and rural communities within the borough’s boundaries. It has earned the right to call itself a retail centre of excellence, second only to Belfast, accommodating a wide range of independent businesses that co-exist alongside well know national high street names.

It is also home to one of the biggest musical festivals in Ireland, has one of the best junior football stadiums in the country, spacious town centre parks and a big industrial heritage: four companies in the town employing more than 1,000 employees each. Add in its central geographical position and good transport links and you have a very pleasant local environment in which to live and work. The challenge for the Guardian is to make sure we accurately and comprehensively reflect borough life in all its many facets through our pages.

What have been the most significant stories you have covered in your career?

As a young reporter at the Telegraph I covered many ‘Troubles’ related stories and they were all equally tragic. I was sent to Enniskillen the day the Remembrance Day bomb exploded and subsequently spent many days there covering what was effectively a crime against humanity. Yet even in the midst of the carnage, heartbreak and tragedy there were tales of heroism, compassion and forgiveness that I have never forgotten.

On a personal level, I broke the story of the retirement of the Rev Ian Paisley as an MP in the Guardian. It was a scoop that attracted international attention and showed that respected, well produced weekly papers often punch well above their weight if they are pro-active and seek out what I call ‘proper news.’

In your view what makes for a successful local newspaper?

Successful local newspapers consider themselves as part of the fabric of the local community and not simply as detached observers but passionate and trusted advocates for matters of local importance. Most of the staff live in the community and are directly affected by the issues we cover.

The Guardian is jam-packed with local news, local features, local sport, local pictures and local advertising. ‘Local’ is the key word and Northern Ireland is fortunate to have such a strong tradition of quality weekly newspapers that are the envy of the industry. It means that our very specialised local content cannot be replicated by what are often uncensored, unreliable and untrustworthy online platforms. 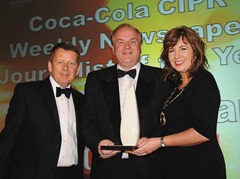 What do you enjoy most (or least) about the job?

In general, weekly newspapers tend to be ultra-supportive of the communities in which they operate, trying to make a positive difference to their community, and that’s a brand of journalism I believe in.

Breaking a big story is always satisfying, and we get our fair share, but as I’ve said already, no story is too small for the Guardian. So whether it’s covering school prize days and formals, BB displays, church socials, charity fundraisers, young farmers’ clubs or highlighting individual local achievement, they all have one thing in common: community pride and that is what the local paper is all about.

In terms of what I enjoy least about the job, I have to say there’s very little but I am worried about the unfettered power of the internet. Depending on your perspective, it is either a thing of beauty or an uncontrollable monster. A lot of material that circulates on websites is so defamatory and pernicious that, if printed in reputable newspapers, would probably put them out of business. What’s more, given its omnipotent reach, I don’t think the authorities quite know how to deal with it or control it.

How do you think the newspaper industry will develop over the next five years?

I think the best newspapers will still be in business, principally because they are a trusted brand and there is an intrinsic pleasure in reading a newspaper that you simply cannot get from a computer screen. That’s not to say that newspapers can ignore digital platforms. They are here to stay but it’s up to us to control them rather than be controlled by them.

Good reporters who seek out exclusive content for their papers will always be in demand. Remember the internet is but a mere ‘infant’ in terms of the media’s long and distinguished history so, while the newspaper industry may consolidate further, I think reports of its death are exaggerated.

What are your main interests outside work?

I enjoy foreign travel. My son is a post-graduate research scientist at Stanford University in California. We had a brilliant holiday in San Francisco when we visited him last year and I think I would like to see a lot more of the west coast of the USA. I was on the board of the Ulster Youth Orchestra for five years and I enjoy listening to popular classical music. I’m a member of Whitehead Golf Club and also enjoy watching all-Ireland champions, Crusaders, at the shrine of football: Seaview.