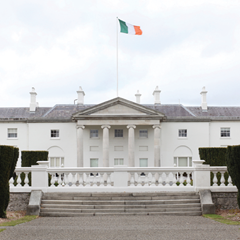 Peter Cheney considers the consequences of the Irish presidential election.

Ireland will be gripped by a lively and intense presidential race in the run-up to polling day on 27 October. The first presidential poll since 1997 sees the widest field of candidates to date (seven) aiming for high office, among them Martin McGuinness.

His success is far from guaranteed. David Norris also appeals to the protest vote, Gay Mitchell and Michael D Higgins have party machines. Mary Davis, Seán Gallagher and Dana Rosemary Scallon (a Derry woman) can claim to be independent outsiders. Close scrutiny of his IRA past is inevitable.

The McGuinness candidacy demonstrates Sinn Féin’s growing confidence and the South’s strategic importance to the party.

While elected only by southern voters, he or she is President of Ireland (not the Republic) and is therefore expected to have a northern role, following Mary McAleese’s example. If elected, McGuinness would take this further although many unionists and constitutional nationalist will still be uneasy about his history.

The presidency and the Irish state were once irrelevant to the republican movement. The IRA considered itself “the legal and lawful Army of the Irish Republic”. Sinn Féin voted to recognise the Oireachtas in 1986 and Stormont in 1998. Sharing power with the DUP at Stormont has given the party respectability but it risks becoming part of the establishment.

Republicans want to stress their radicalism again, especially as its ministers start to make spending cuts. Sinn Féin’s achievements in government have been relatively modest and have depended on agreement with the DUP. The North/South Ministerial Council covers the same areas of co-operation and cross-border bodies as it did in 1999. Dissidents are recruiting disillusioned young republicans in Lurgan and Derry.

On paper, the presidency is mainly symbolic and defers to the Government. However, as the President is elected in his or her own right, the Government lets the incumbent work on their chosen themes. Furthermore, the President can intervene directly in southern politics by referring bills to the Supreme Court or refusing to dissolve the Dáil.

In the longer term, the presidential election offers a potential vehicle for unity. The next is due in late 2018, near the centenary of the last all-island general election. If the Irish Government went ahead with overseas voting rights, it would be obliged (in fairness) to extend the franchise to Irish citizens in the North. An all-island poll would add a new and unknown factor into the political process. For nationalists, this would be unity in practice while unionists would resent the eroding of the union.

More immediately, a decade of centenaries promises to make the next presidential term a dynamic one for the man or woman chosen to represent the island.