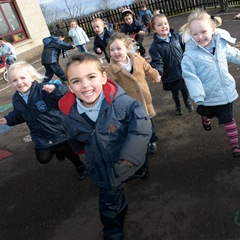 Northern Ireland’s education system is an obvious sign of the province’s division, especially to outside observers. After the July riots, broadcaster Andrea Catherwood asked Times readers to “imagine the outcry” if all children in Birmingham were segregated by ethnicity and religion at the age of three and educated separately until 18.

In its favour, separate education allows parents to choose schools with their own community’s ethos. The result, though, is that over 90 per cent of children do not meet a child from the other community during their average school day.

Integrated education is officially defined as “the education together at school of Protestant and Roman Catholic pupils” in the 1989 Education Order.

Our analysis focuses on the three main levels of schooling: primary, secondary (non-grammar) and grammar. In 2009-2010, these accounted for just over 300,000 pupils in 1,068 state-funded schools.

Those schools were, in turn, spread across four sectors:

The clearest example of integrated education is the formal integrated sector, which had 20,204 pupils and a 6.7 per cent share. However, there were also:

When these numbers are added, the new integrated total appears to equal 28,773, or 9.6 per cent.

Most education in Northern Ireland is state-funded but also influenced by the churches and, of course, parental choice. All three groups will therefore influence whether and how the system moves towards more sharing.

The UN’s Universal Declaration of Human Rights, in 1948, recognised that parents had a “prior right to choose the kind of education that shall be given to their children.” The European Convention on Human Rights adds that the state shall respect the right of parents to “ensure such education and teaching in conformity with their own religious and philosophical convictions.”

Surveys suggest that integrated education is parents’ main preference and support is much higher than the current enrolment level.

A Millward Brown survey in 2008 found that 43 per cent of respondents would prefer that their children or grandchildren attended an integrated sector school.

In the 2009 Northern Ireland Life and Times Survey, 62 per cent of respondents said that they preferred mixed-religion schools. Similar trends have been recorded in that series and the previous Social Attitude Surveys since the 1960s.

Schools were first provided by the churches and all four main denominations draw up the core RE syllabus. Religious education and collective worship is compulsory, although parents have the right to withdraw their child.

Almost all schools in the first category are Catholic-owned.

“Education is not value-free,” Bishop Donal McKeown told agendaNi. In his view, Catholic education “communicates a particular vision of the human person and of the meaning of life.” In Catholic thinking, the school complements learning in the home and at church. Non-Catholic children also attend the church’s schools and opt out of worship.

Protestant churches saw the transfer of their schools as an ‘investment’ in the Northern Ireland state. Most controlled schools therefore have church-appointed governors.

“We seek to contribute a vision of education based upon the values of the Christian faith,” said Rev Ian Ellis, who is secretary to the Transferors Representatives Council. While schools have a “diversity of beliefs” among pupils, parents and staff, Christianity continues to be “the most widely held religious faith” in Northern Ireland. “It is also our belief that the impulse of many parents is to have their children educated in schools within the context of Christian faith.”

The seven independent Christian schools are mostly run by the Free Presbyterian Church, which considers the state system too secular.

The religious divide, of course, mirrors political division. Catholics initially set up their own schools due to state persecution under the penal laws. The nature of the state has subsequently changed over time, switching between direct rule and devolution.

Governments have intervened to promote integrated education on four occasions.

The Protestant and Catholic churches disagreed over the form of RE to be taught. The state therefore allowed them to run their own separate schools, with state funding.

Northern Ireland was formed in the midst of sectarian conflict, with nationalists resenting partition and boycotting the unionist government. Against this troubled backdrop, the first education minister Lord Londonderry sought to create a non-denominational system, again to reduce to division.

• every state-funded school was to be open to all children, regardless of background;
• religious education could be taught outside compulsory school hours.

Despite underfunding, the Catholic Church remained opposed, to preserve its schools’ ethos. Their grant was gradually increased, reaching the full 100 per cent for recurrent funding in 1989.

Deep divisions remained throughout the old Stormont era but this was not the full picture. Protestants and Catholics were educated together at university, in colleges and grammar schools and in the mill schools of County Down.

Another UUP education minister, Basil McIvor, suggested a shared schools plan in 1974 but the Executive collapsed soon afterwards. This would have set aside £13 million for schools which involved Catholic and Protestant churches in their management.

Brian Mawhinney introduced a duty to “encourage and facilitate the development of integrated education” in 1989. A Shared Future, published under direct rule in 2005, also warned that “parallel living and the provision of parallel services are unsustainable both morally and economically.”

Reducing and eliminating segregated services” is only a long-term “theme for action” in the Executive’s draft Cohesion, Sharing and Integration strategy; the document only briefly mentions education.

Funding for community relations in education has been cut from

£4.25 million in 2006-2007 to £1.1 million this year. The Department of Education is moving the subject into the main curriculum as ‘community relations, equality and diversity’ (CRED). However, as the school census shows, most of that curriculum is taught in segregated schools. 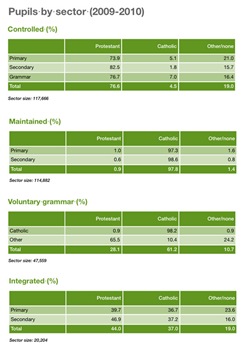 Based on previous academic research and the available statistics, agendaNi has identified five potential options to increase the level of integrated education. These cover the whole definition, not just the formal integrated sector, and a strategy for sharing could combine more than one option.

Bringing all state-funded schools under state control is the most radical option.

In theory, it would be possible for the state to create integrated schools in mixed areas by merging mainly Protestant schools and mainly Catholic schools, with the smaller one closed to save money. A fully integrated school, though, is only possible if the neighbourhood it serves is itself shared.

Back in 2001, a total of 435,603 people lived in wards where over 90 per cent of residents are from one community. This meant that 25 per cent of the population effectively lived in single-identity areas. Around a quarter of schools would have a fully Protestant or fully Catholic intake, but a state-run solution could result in a major increase in integration (potentially up to

75 per cent if applied in all mixed areas).

However, it would also restrict some choice, especially if parents had to pay fees for a church school. The state would also need to decide whether and how to teach RE in such a system.

Taking religion out of school would resemble the USA’s public schools system and the 1923 Londonderry plan is the closest historical precedent.

American public schools effectively replace religion with a single national identity (e.g. the pledge of allegiance to the flag), which is missing in Northern Ireland. A US-style system may also lead to parents with strong religious beliefs opting out, either through private religious schools or homeschooling. As of 2007, around 12 per cent of American children were privately schooled and 3 per cent were homeschooled.

Support for secularised education is hard to gauge as the department does not keep statistics on parents opting out of RE. It is strongly backed by the Humanist Association and around 33,000 pupils (10.9 per cent) have no religious background.

Alternatively, a general form of RE and collective worship could be retained along with the parental right to opt out. This is closest to the 1831 Stanley plan but some parents may prefer a stronger Catholic or Protestant ethos.

Outside Northern Ireland, there are around 20 examples of schools, colleges and universities run jointly by Protestant and Catholic churches. Most of these have been formed in England by the Catholic Church and the Church of England. Both traditions are taught.

Archbishop Alan Harper has suggested that the two traditions can “work together with imagination and creativity to offer a shared Christian vision” in education. Catholic and Protestant clergy have visited jointly managed schools in Liverpool.

The number of GMI schools rose from 10 in 1991 to 37 in 2004. Only one new school was added between then and 2009. Decreased capital funding makes new builds less likely, especially with 54,000 unfilled places and a £292 million maintenance backlog. However, the Life and Times Survey suggests that parental demand for integrated schools will remain consistently strong.

For transformation, a school must enrol 10 per cent of new pupils from the minority and achieve an overall 70:30 balance within 10 years. Last year, there were 18 controlled schools with 30 per cent or more Catholic pupils.

However, each transformation results in one less controlled school and the number of Protestant church governors normally falls from four to two. Protestants can therefore feel a “sense of loss” when transformation occurs, Rev Ellis explained.

So far, the solutions have focused on reshaping the system or creating more formal integrated schools. However, integrated education occurs through joint classes and activities between schools in different sectors. Early examples included the Education for Mutual Understanding and Cultural Heritage programmes.

The 2006 Bain Review called for collaboration to be maximised. The Sharing Education Programme, managed by Queen’s University, aims to put this into practice and its partnerships have helped to organise shared classes for around 60 schools since 2007.

The Entitlement Framework also makes sharing more possible. From September 2013, schools will be required to provide a minimum number of 24 courses at Key Stage 4 and 27 at post-16 level. At least one-third of courses must be academic and at least one-third vocational.

In 2008, 59 per cent of schools collaborated with other schools to deliver the curriculum – a level which is likely to rise as schools cannot provide all the new courses by themselves. The department is therefore encouraging schools to organise links through ‘area learning communities’.

Collaboration can also take place in further education colleges, which are non-denominational.

Michael Wardlow, a former Chief Executive of Northern Ireland Council for Integrated Education, welcomes shared activities between schools but wants to see this approach incorporated into the whole school rather than depending on individual teachers or departments.

Wardlow’s focus is on people, not organisations and structures. All staff – whether teaching, ancillary or admin – “have individual but interdependent roles in operating a school and supporting learning in that community.” It also covers the board of governors and ideally, parents as well.

Each of the methods to increase integrated education has its pros and cons but the overall concept has clear benefits.

There is a continuum of ideas. Sharing could mean merging all sectors into one or continuing with the same sectors as now, as long as all schools make sure that regular sharing takes place.

Academics in the 1960s described Northern Ireland as a ‘divided community’. Now, it is usually described as having ‘two communities’. A separate but equal approach will probably see the next generation grow up even further apart.

Education is about the future and, put simply, it’s hard to imagine Northern Ireland having a genuinely shared future without a shared education system.

The financial cost of division in education remains unclear. In 2007, the Deloitte study could not separate this from the effects of academic selection and running small rural schools. However, it identified the costs of extra management for separate sectors (£6.4 million) and the grants to separate teaching colleges: £4.59 million to Stranmillis and £4.48 million to St Mary’s.

‘Developing the case for shared education’, published by Oxford Economics this September, calls on the Executive to improve sharing, partly for financial reasons. As well as efficiency, integration could prove to the UK Government that Northern Ireland can do “more for less” as spending cuts start.